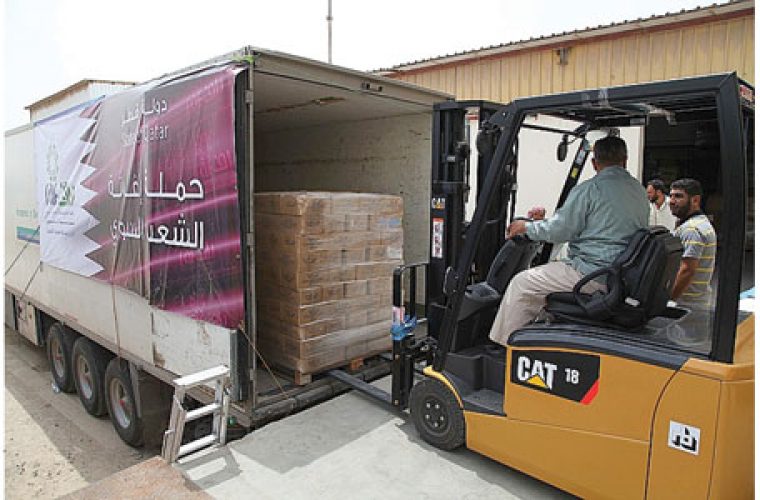 A leading Qatari charity will today dispatch 100 trucks of aid worth QR10m to support displaced Syrians inside and outside Syria.

This is considered the largest aid convoy to Syria being sent by Sheikh Thani bin Abdullah Foundation for Humanitarian Services (RAF) as part of its campaign ‘Syria Calls Upon Us’ to meet urgent humanitarian needs of the displaced Syrians.

“This convoy named ‘I need you to live’ is the largest launched by RAF to address the tragic situation of displaced Syrians inside and outside Syria, after the aggravation of the crisis over the past three years, which has led to the death of 150,000 people, and displacement of about 6.5 million people from their homes.

“And about 3m people fled to neighbouring countries, and every day the humanitarian situation is getting worse and worse for the Syrian people,” said Dr Mohamed Salah Ibrahim, Executive Director, RAF.

Each truck contains aid worth about QR98,000.

Dr Ibrahim said the campaign was in line with a UN report, which said that half of the population of Syria would need help before the end of this year and called for immediate steps for relief for displaced Syrians in Syria and neighbouring countries.

Another leading Qatari charitable organisation, Qatar Charity, has been ranked first among NGOs providing aid to the Syrian people last year, in a report by the Office for Coordinating Humanitarian Aid affiliated to the UN.

Qatar Charity disbursed aid worth more than $29.4m during the year to support the displaced Syrians in Syria and neighbouring countries, which is more than the assistance provided by some European countries.

The UN refugee agency and Syrian Arab Red Crescent (SARC) said that they had managed to bring humanitarian aid to a besieged neighbourhood in eastern Aleppo, an area that had been cut off from assistance since last June. The “rare and risky” operation to deliver aid to Boustan Al Qaser was carried out following an agreement with the Syrian government and the opposition, according to a statement issued by the UN High Commissioner for Refugees.

Two truckloads of blankets, plastic sheeting, hygiene kits, kitchen sets and food were offloaded at the last check-point on the outskirts of the city.

The relief materials were then transported into the community, using 54 pull-carts and 75 workers, back and forth, 1.5km each way and in 270 trips, for later distribution to a SARC warehouse and then to the needy population.