United Nations of Comedy is back to entertain Doha at QNCC 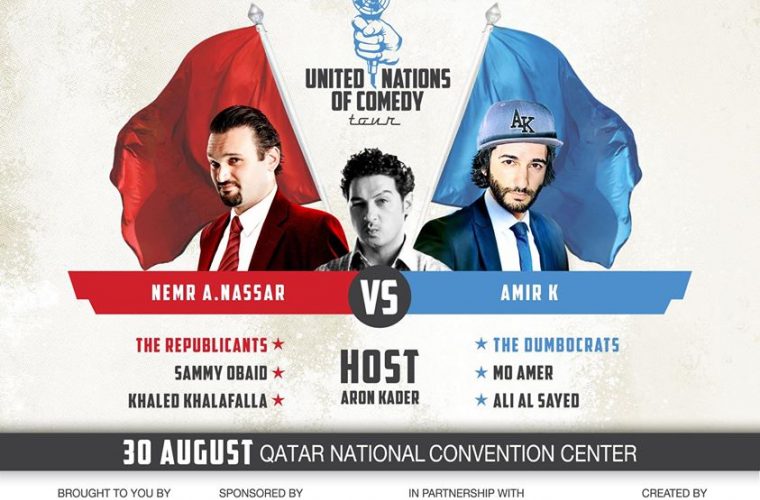 Once again, the much anticipated United Nations of Comedy will be coming to Doha for the second year in a row as part of Qatar Summer Festival 2014, brought by Qatar Tourism Authority and Qatar Event Diary. A set group of renowned comedians will entertain Doha’s community at the prominent QNCC theatre on August 30th 2014, hosted by Khalifa Al Haroon and Aron Kader.

Created by ADabisc, The United Nations of Comedy is a headline comedy tour bringing distinguished and well-reputed international comedy stars to impress Doha with their significant sense of humor, blended with their multicultural backgrounds. This year’s tour will feature seven comedians in total, including Nemr Abou Nassar, Sammy Obeid, Khaled Khalafalla, Amir K, Mo Amer, Ali Al Sayed, and Aron Kader, who will amuse and wow the large audience expected to attend. The comedians will be split into two teams, The Dumbocrats and The Republicants, performing individually and head to head, to win the votes of the audience members.

“The Qatar Summer Festival centers around offering a diverse and appealing scope of activities and events within Qatar that will entertain locals and visitors from abroad over the next month. By partnering with ADabisc in this anticipated event, Qatar Tourism Authority (QTA) is promoting its goal of further developing the tourism sector by hosting international and multi-cultured comedians who simultaneously understand the region’s cultural and social cues, and can draw in both Qatar’s regional and multi-national audiences,” said Mashal Shahbik, Eid in Qatar and Qatar Summer Festival Project Manager.

Commenting on the event, Hamzeh Zahr, Head of Entertainment Production at ADabisc said: “The laughter and success we achieved with this event last year was phenomenal, which is why we wanted to do it again this year. Bringing some of the funniest and most professional comedians to Doha is important; especially that Qatar has become a preferred destination for new concepts and events due to its multi-cultured demographic and growing demand for quality entertainment. The United Nations of Comedy will captivate all criteria, from families to a group of friends, entertaining them on every level.”

The QNCC venue was chosen once again, to hold the event by ADabisc due to its similar United Nations auditorium layout, bringing the large audience expected to attend under the umbrella of comedy. Furthermore, the main sponsor of the show is Nandos, partnered by Grand Hyatt Doha, Al Cinema, JustHere Qatar, as well as I Love Qatar.