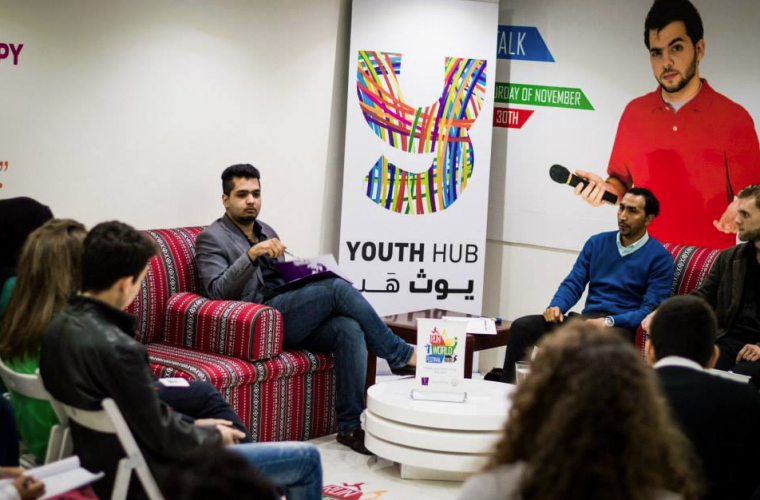 TYC WRAPS UP “RUN THE WORLD TALK” Following four engaging episodes, The Youth Company, social enterprise for youth empowerment, has concluded its series of forums, RTW Talk, having completed its fourth and final episode at Youth Hub Qatar. RTW Talk is the first of three pillars of the Run The World Program, an annual initiative of TYC in partnership with Qatar Museums Authority and Qatar Olympic & Sports Museum. RTW Talk is a month-long program that takes place every Saturday between the 9th and 30th of November 2013, featuring a range of topics discussing how youth may lead healthier and happier lifestyles. During the forums, delegates were given the opportunity to touch base with some of the region and the world’s champions in health, wellbeing, sports, and community. The fourth RTW Talk was held at Youth Hub, Qatar and explored the topic of the food-mood balance, titled, “Moody Munch.” The talk welcome nutritionist speakers and experts, and discussed points such as correlations between kinds of food consumed and mood changes, as well as discussion on food consumption and better performance within sports. Previous RTW topics included; fight against depression (23rd November), self-image among young men (16th November), as well as videogame influences on youth (9th November). Each talk welcomed a number of guest speakers with expertise and experience in the field. “This is the second year we have hosted RTW Talk within the RTW Program, and we are pleased to see that it has definitely engaged many more young participants this year. Holding the talks during November and segregating the different topics for youth to choose gave the show more structure, flexibility and received a huge response from the audience, who are extremely enthusiastic in learning more about how to live healthier lifestyles,” says Aya Abu Issa, CEO of The Youth Company, Qatar. As TYC’s largest and most-anticipated youth event of the year, Run The World presents an exciting opportunity for youth between the ages of 14 to 29 years to not only participate in a range of sports, fun activities, performances, and exploring worldwide cultures, but also to get involved in community projects and forums such as RTW Talk. These additional programs are aimed to make RTWF 2013 a much more community enriching and empowering experience. “Although the RTW Talks have come to an end, this is only the beginning of RTWF 2013. Auditions for the Youth Got Talent singing and dancing competition are already underway between the 28th of November and 3rd of December, following with its semi-finals at Virgin Megastores – RTW’s entertainment partner – and the organizers are in full swing preparing for the highlight festival from the 19th to 21st of December at Katara Beach,” says Abdulrahman Sajid, Deputy CEO of The Youth Company and Project Manager for Run The World 2013. Run The World Festival preparations will continue to take place during the month of December, securing partnerships with a number of the nation’s top companies, all of which will hold a significant presence within the festival as sponsors, exhibitors, entertainment, press & media, as well as activation partners. [attachment 11088 ScreenShot2013-12-02at5.27.27PM.png] - ILQ News -