The legendary spider reveals her soul. A symphony of electric beats and pumping adrenaline. Coming alive at sunset to weave people together. 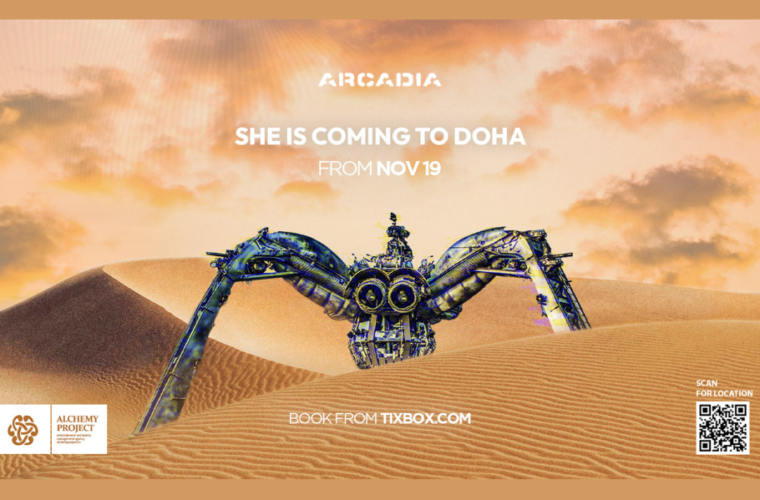 Alchemy Project Entertainment, in association with the Supreme Committee for Delivery & Legacy (SC), is proud to reveal the first line-up names for the Arcadia Electronic Music Festival.

Over 150 performances of the most renowned global artists are coming to Doha to fire up 3 iconic stages of Arcadia, Doha’s most anticipated electronic music festival, starting from 19 November to 19 December 2022.

Note: Early bird tickets are still available until 16 October! However, the exact artist lineup for the specific dates are yet to be announced.

Here is the first release of artists performing at Arcadia over 17 days:

These multi-talented DJ dynamos are the all-time top-ranking female DJs in the world.

With over 4 billion streams on Spotify and 20 million monthly listeners, Alok is a Brazilian artist whose videos on YouTube exceed 3 billion views.

A DJ, producer, and mogul whose label is at the forefront of modern electronic dance music has created remixes for Afrojack, Armin van Buuren, David Guetta, Martin Garrix, Rita Ora.

The artist amassing an army of instantly recognisable hit singles, with over 13 billion global streams, over 60 million singles sales, and 5 BRIT Award nominations

The iconic DJ, prolific artist and producer in dance music culture who has remixed Madonna, Britney Spears and other big names in music.

Has a #53 placement in DJ Mag’s Top 100 DJs for 2020, where he rose 6 places and extended his ranking as the longest-serving Dutch DJ in the Poll at 9 years

Martin Jensen is the most streamed artist in Denmark and with over 1 billion streams. “Solo Dance”

received over 1 million daily streams, and to date, it has received more than 620 million streams on Spotify alone.

Grammy Winner for Best Remix in 2013 for his version of Lana Del Rey’s 'Summertime Sadness' with a monthly Spotify audience of over 4 million listeners.

The DJ and producer whose "Release Yourself", a weekly terrestrial and online radio show and podcast, attracts over 20 million listeners around the world and is broadcast in over thirty markets on every continent.

World’s essential, influential and popular DJ, producer in dance music today. His “Gold Skies” picked up well over 60 million plays alone, making for one of the biggest hits of his career so far.

Artist from South America with Latin GRAMMY award, 2 MOBO awards, MTV Awards and a litany of Gold and Platinum awards.

Australian producer and DJ with 2.8 million listeners on Spotify.

Dynamic Dutch duo Sunnery James & Ryan Marciano have built a reputation as prestige artists both behind the decks and in the studio.

From Techno/Tech House and underground music

Music DJs and producers from Ukraine with 1.6 million listeners on Spotify.

Argentina's most world-renowned superclub DJ who became the first ever South American resident for global brand Cream; won residencies at Cream in Ibiza and Liverpool and Pacha in Buenos Aires and Ibiza; and went on to grace the DJ Mag Top 100 poll ten years in a row.

Artist whose drive, talent and intuition have placed him in the top tier of electronic music artists in the world.

Canadian Project with a major underground music movement, transcending genre barriers and garnering accolades such as #1 track of the year at the Beatport Awards in 2011 and iTunes #2 “Best Electronic Album” of 2011.

The duo formed by the legendary producers Anthony Middleton and Luca Saporito with 32K followers on Spotify.

Revolutionary live artist with a shining reputation for versatility from Ireland.

British deep/tech-house DJ and producer who’s single "Evolve or Die" appeared in 2017, the year he was nominated for Producer of the Year at the inaugural Electronic Music Awards.

Miss Monique is among the world's fastest-rising progressive house DJs, and probably the genre's most recognized female DJ in Europe.

French house DJ and producer who has 369K listeners on Spotify. In 2019, his 'Lanarka' track was the overall Number 1 on Beatport for the best part of three weeks.

Talented music artist, DJ and producer with 104,3 K listeners on Spotify whose minimalist and organic sound evoked deep personal emotions as it connects with the audience.

DJ from Ukraine whose tracks are released at world’s best labels AFTR:HRS, Get Physical, Zehn and conquer top positions in charts of Beatport.

Serbian born Artist is undoubtedly one of electronic music’s most exciting prospects his tracks regularly played by the names like Tale of Us, Adriatique, Dixon, Solomun and many more.

The DJ with one of the most unique and exciting sound among the electronic music acts of today with 5 million and 2 million Spotify streams.

Chris Avantgarde is a German born, London based artist, producer & composer best known for his off-kilter approach towards electronic production. He made official remixes for artists like The Prodigy, Billie Eilish & Nina Simone.

Dynamic artist from Brazil and selector with the ability to craft compelling sets full of vigour and vibrancy.

Electronic music producer and DJ from Portugal with over millions of streams across multiple platforms.

An adept DJ and producer who demonstrates her passion of music through deep, dark techno and soulful deep house with releases on Stil Vor Talent, Polymath, Sincopat, Parquet and Making You Dance.

Greek born, Berlin-based producer and DJ who has released a steady and solid stream of classically informed house and techno.

Performed at hundreds of locations on five continents, the world-renowned Burning Man and Fusion festivals.

Multifaceted duo comprised of two highly acclaimed musicians in their own right, who combine their many years of experience in electronic music for their all-encompassing.

French DJ who pushes his effort toward the public, craving for its immediate pleasures.

Artist who has quickly established his pedigree as a formidable producer and selector through scintillating DJ sets and a batch of stunning releases.

Duo formed by Andrea and Salvatore who always search for the best chord for the moment they live.

Russian DJ's and producers-duo from Saint-Petersburg with a quality mix of melodic techno and progressive house.

Dispels notions of musical homology and plays narratives of existence of the African, self-rooted within an ecosystem of lush culture.

Artist with the first ever release "Cabora EP" was played in many sets around the globe by Solomun and his high-tier DJ friends.

German talent has been a mainstay of contemporary melodic deep house for nearly a decade whilst her productions have regularly featured high up Beatport with 2018 single Pure landing at #3 in the Progressive House chart.

Has developed a sound heavily influenced by the underground scenes in the two meccas of electronic music.

Belgian DJ, producer, a well-known figure in the Belgian electronic music scene and a yearly guest at Tomorrowland, Extrema Outdoor and WeCanDance. Maxim Lany has spread his sounds throughout the years all over Europe and Asia, building up a strong reputation.

One of the most discussed artists of the year and notable figure in the dance scene with 2,4 million monthly listeners on Spotify.

German DJ trio with 4 million monthly listeners on Spotify. To stay so private and unknown in the visual modern world of likes and photos is no mean feat, especially considering he plays more than 260 shows around the world each year.

The most renowned and instantly recognisable artist from Holland, representing underground house and techno on a wider global stage.

Spain-based producer who established himself in the techno world for his work as beginning in the early 2000s.

Fueled by an innate determination, drive and passion, with attuned intuition applied to both his music and life, West African native AMÉMÉ channels his cultural roots and ancestry into everything he does.