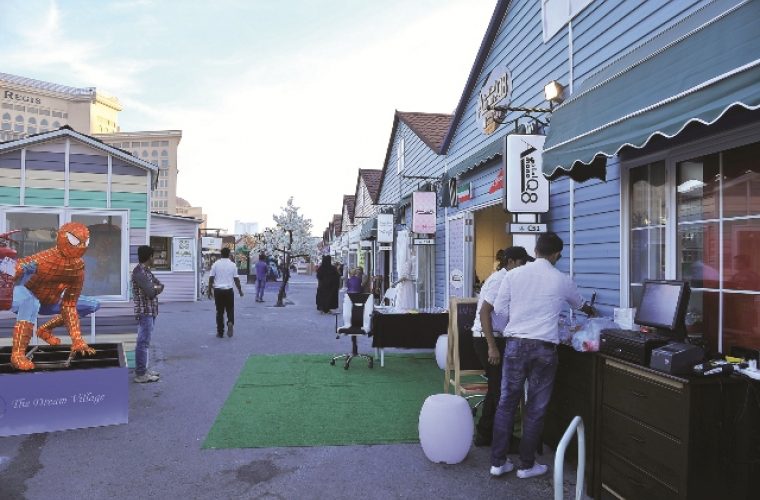 In the past few weeks, people have shared photos of themselves on social media with a blue castle in the background, it created a buzz in the community, leaving many wondering what and where it was.

It later turned out that the castle is one of the main features of the Magical Festival Village, which officially opened in Katara on Thursday.

With its European-inspired architecture, the 40,000sqm village nestled in the southern beach area of Katara is the latest tourist attraction and shopping destination in Doha.

A huge fountain with over a hundred pumps greets visitors at the entrance of the village. Circling it are more than 20 restaurants and cafes offering good fare and variety with a seating capacity of over 800.

More than 400 boutiques lined up neatly and painted in varying colours are a sight to behold, departing from the usual designs seen around the city. While they look European from outside, inside the boutiques are all sorts of products coming from 20 countries in the region. The market is a one-stop shop to buy everything from clothing, perfume and jewellery to toys, carpets and handicrafts among others.

The Village will also host various discount seasons on the most famous global brands, which will add an international shopping flavour and allow shoppers to discover new brands at reasonable prices.

At night, the alleys are illuminated by lampposts resembling ancient European boulevards. Statues of famous cartoon characters are scattered around the village bringing cheer to young visitors.

The alleys are also set to serve as an open art gallery, displaying works by some of the most important international artists.

The Village is family friendly with a number of entertainment and games such as an outdoor ice skating court, a giant trampoline, Go Kart race, special effects cinema and a riddles room.

The village’s main attraction, the Fort Castle, has been built to morph into a giant screen showing movies in 3D Mapping technology, along with technical and mechanical effects. Another feature of the castle is a Virtual Reality studio that takes children to where their favourite cartoons have been created, using the same effects utilised in the renowned international studios.

In addition, the Village also promises to surprise visitors with new games and attractions on a daily and weekly basis such as daily carnivals and musical corners.

As a distinct feature of the Village festivals will be organised regularly including the Smart Science Festival that encourages innovation mindset in kids, the Fantasy & Laughter Festival designed for families, and the Chocolate Cupcake Festival that centres on cakes and sweets in a non-traditional way, since it will not focus on promoting products, but only fun and enjoyment.

Events catered exclusively for women will also be hosted in the village including Fashion Week, which will provide opportunity to know more about the fashion in 2016 – 2017 season via meeting with some of the most famous designers in the Arab region and worldwide. This event will be held in the Hall, a 1,500sqm events venue in the village.

A number of international festivals, such as Wedding Festival and Balloon Festival as well as other events which have never been hosted in Qatar will also be organized in the Village to position Qatar as a bespoke tourist destination in the region.

Ezdan Group CEO Ali Al Obaidli said the Village with its numerous attractions including festivals and events will compete with GCC counterparts with the participation of major companies in Qatar and the region.

The Village which will be open from October to May seeks to make of Qatar a major tourist destination in the winter when the annual events will take place, he added.

The project was implemented in cooperation with a number of government and private entities including Katara, Ezdan Holding Group as strategic partner and Media Works, as general contractor.

“Our partnership in this project stems from our desire to create a stronger communication with the community. We seek this through projects that would provide an exclusive family shopping and entertainment outlet over a large area,” said Al Obaidli.

He explained that this strategic partnership was the result of the Group’s distinct stake in the company that oversees the festival and organises its events on an annual basis. The company also plans to organise a number of events aimed at stimulating hospitality in the state and contributing to make Qatar one of the best regional tourism destinations, especially for citizens of the GCC.

Katara’s Human Resources Director Saif Saad Al Said Al Dosari said Katara is keen to invest in facilities which provide diverse environment and activities which will contribute to the advancement of cultural movement and promotion of tourism in Qatar.

“We are working to strike a balance between what is cultural and what is profitable. We invest on cultural buildings and facilities to achieve profitable revenue to support the organisation’s activities and events,”said Al Dosari.

The project cost more than QR60m and took 600 labours 50 days to complete.

The village is open for the next three months, from 3pm to 11pm during weekdays, and from morning time on Friday and Saturday. It will be closed during summer and reopen from October to May. (Source)