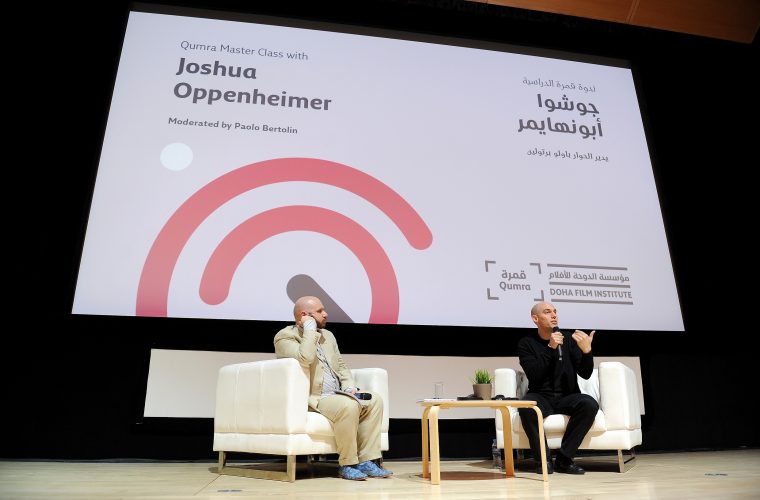 The masterclass by Academy Award nominated documentarian Joshua Oppenheimer (The Act of Killing, The Look of Silence) on the final day of the Doha Film Institute’s Qumra event offered deep insights into documentary filmmaking and an examination of the nature of testimony in his films.

The session opened with Oppenheimer discussing his decision to become a documentary filmmaker which came to him in a moment of clarity on a glacier in Northern Pakistan. After spending 6 months in India working on a project in Calcutta where street theatre was being used as a political organizing tool, Oppenheimer was trekking in Northern Pakistan and had an epiphany while reflecting on the intense emotional experience: “Maybe in that moment, I reckoned that if I became a non-fiction filmmaker I would be able to reflect on these experiences, excavate them and work with them.”

Describing the impact of his mentor, Yugoslav filmmaker Dusan Makavejev, Oppenheimer said: “he combined documentary and narrative to great effect and I was always fascinated by this intersection between non-fiction and fiction.”

Renowned for his two Academy Award nominated documentaries that explore the brutal legacy of the Indonesian genocide of 1965-66 through a series of interviews with members of the paramilitary organisation Pemuda Pancasila, Oppenheimer discussed how he was first drawn to Indonesia to conduct a filmmaking workshop with members of the plantation union. This led to a 13-year journey and two documentaries which he described as “an examination of the abyss that lies between ourselves, and the stories we tell about ourselves.”

The exposé of the regime depicted in his films is notable for the surreal way in which the perpetrators describe and re-enact their actions during the killings - something that Oppenheimer discussed as integral to understanding “how they wanted to portray the events, and how they wanted their own society and the world to perceive these events.”

“I never once asked a perpetrator to act anything out, it came from them. They would immediately start boasting about what they had done, they would invite me to the places and launch into these spontaneous shows of how they killed, performing their impunity every time they boasted.”

“I would take pains to say I don’t think this is really re-enactment which is a technique used to dramatise things that are no longer able to be filmed. Fundamentally I think re-enactments are concerned with the past. I would say these films are about the present. The perpetrators are acting out present-day lives, fantasies and stories that allow them to live with what they’ve done.”

In discussing these scenes Oppenheimer articulated how the melodrama serves as a form of moral blindness and how in documentary filmmaking dramatisation can trivialize horror: “The melodrama is a form of escapism which takes us away from the singular horror of the situation. It is the same with sentimentality – which is something we often introduce unwittingly in our films. It is always escapist.”

Expanding on this idea, Oppenheimer referenced a quote by Czech author Milan Kundera talking about sadness and how we cry a first tear because we feel genuine emotion, and we cry a second tear because we are aware that the whole world is crying together. He said: “The second tear is the escape from the first tear. In my work I’m trying to bring viewers to a place to experience the third tear – where you can experience the tragedy of the second tear.”

Oppenheimer discussed his 2016 Academy Award nominee for Best Documentary Feature ‘The Look of Silence’, a companion piece to ‘The Act of Killing’, which follows an optician named Adi as he confronts the men responsible for the genocide that killed his older brother. While testing their eyesight, he asks them to accept responsibility for their actions. Oppenheimer discussed the device of the eye test as a mechanism to create intimacy between Adi and the interview subjects and how it then evolved into a broader metaphor for the film, referring to the moral blindness of the perpetrators and their distorted vision of the events of the past.

“There is a beautiful sentence in Qur’an ‘the world is full of signs, you just have to learn how to read them.’ This is an apt metaphor for cinema as a whole but especially in documentary cinema. You’re looking all the time – you know when you find it and you have to find ways of framing it with precision so it is lifted from its physical and narrative context into its metaphorical context.”

Elaborating on this concept he said, “There are two things the metaphor must do: it needs to outlast its narrative purpose; and it has to retain enduring mystery. If it can be explained it becomes a symbol.”

Offering further advice on how filmmakers can incorporate metaphor, he said: “While you are shooting and editing, you have to look for these signs, and then you have to tend to them, so that they grow throughout the whole process. As a filmmaker, you have to think: how can I introduce it into other scenes; how can I frame it; how can I photograph it; how can I place it in the editing so that it never becomes a symbol and embodies the meaning of the entire film.”

In discussing the way he depicted the humanity and grace of the family members depicted in ‘The Look of Silence’ Oppenheimer said: “I realised that this should not simply be a political film or rather, should not appear to be a political film. It should also be a film - and necessarily must be if it is to be genuinely political - about oblivion and memorium. I came to realise whatever truth, justice and reconciliation these films might help engender, it will not make whole all that’s been broken. It will not give back those 50 years to the victims of these killings.”