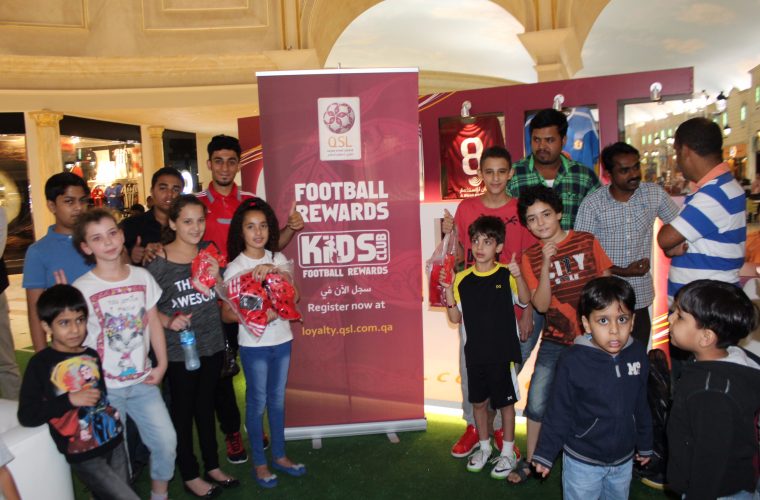 The QSL is delighted to announce the launch of Kids Club, a new loyalty programme for young Qatar Stars League fans. Kids Club is yet another exciting innovation from the QSL following the launch of Football Rewards last season. Kids Club is open to all children in Qatar aged between 5 years old and 13 years old (inclusive) and is free to join.

Kids Club, like Football Rewards, is the first of its kind in the world and shows the continued commitment of the QSL to becoming the best league in the region.

Through Kids Club, the QSL hopes to inspire the next generation of football fans to become passionate supporters of Qatari football and create a life-long bond to their favourite QSL club.

Kids Club members will receive a range of exclusive benefits in return for supporting their favourite QSL team by attending matches. These exciting rewards include Kids Club merchandise, ticket offers, an e-birthday card, gifts and much more.

Families can register for Football Rewards and Kids Club at loyalty.qsl.com.qa or by completing a registration form at one of the many QSL Experience events or as part of the GOALZ schools coaching programmes.

The parent or guardian has be a Football Rewards member to also be able to register their children for Kids Club, the whole family can benefit from supporting their favourite QSL team.

As Football Rewards members, parents and guardians will have access to rewards from partners such as Qatar Airways, InterContinental Hotels Group Qatar and Fitness First in return for purchasing tickets online at tickets.qsl.com.qa and attending their favourite QSL team’s matches.

Mr Hani Ballan, Deputy CEO of the Qatar Stars League, said: “Launching Kids Club is a very exciting moment for the QSL. Fans are the lifeblood of our game and it is important that we develop new and exciting initiatives, such as Kids Club, to engage with our existing fans whilst also introducing a new generation of fans to the QSL. By engaging with families in particular, we are creating QSL fans for the future and hopefully a life-long passion for Qatari football”.