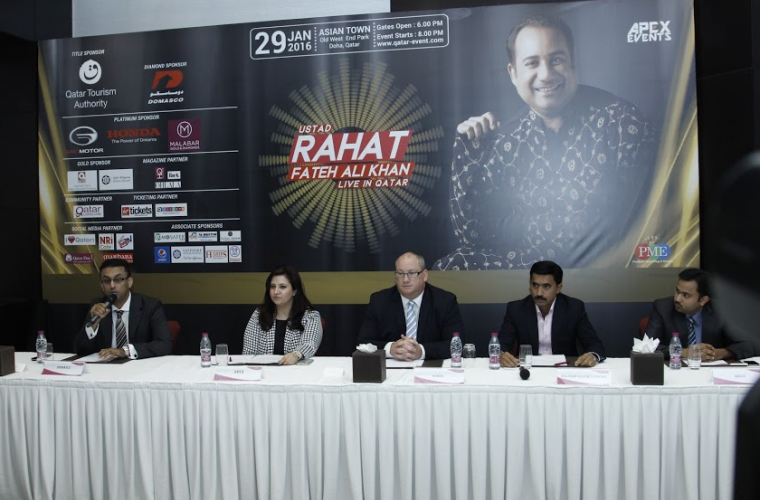 Brought to you by Domasco and Platinum Sponsors are: GAC motors, Honda, Malabar Gold & Diamonds

Qatar Tourism Authority is bringing a Live Concert of “Ustad Rahat Fateh Ali Khan in Qatar”. This is will be a magical performance by One of Asia’s biggest music sensation. So there is something magical happening in our country!!

Diamond Sponsor of the event is Domasco and Platinum Sponsors are: GAC motors, Honda, Malabar Gold & Diamonds. The event will be held at the Asian Town (Old west end park) on 29th of January 2016.

Apex Events have planned this spectacular show to promote multi-cultural activities in Doha, Qatar. This will be the first one in our calendar and many more to come in this year Said Managing Director of Apex Events Mr. Jawed Khatri.

Ustad Rahat Fateh Ali Khan had years of training and relentless practice, and this background served him well. He mastered the art form of classical vocal improvisations, sargam and taan runs and raags (scales). He can pull unrehearsed passages out of thin air with vehemence, burning through numerous octaves, and taking on mind-blowing melodious and musical phrases.

Rahat Fateh Ali Khan travelled to America in the summer of 2000 with two high-profile performances at Central Park Summer Stage, New York and Hollywood Bowl, Los Angeles to fine critical acclaim. He started his world tour and was soon performing in cities in the United States, Canada and Europe including performances at FESTIVAL INTERNATIONAL DES CULTURES-PIRINEOS SUR in Spain and SFINKS FESTIVAL in Belgium. In 2001 he performed at the Tibet House benefit concert in NY at Carnegie Hall and soon after he performed for the Earthquake Benefit Concert, in NY, hosted by former President Bill Clinton.

Ustad Rahat Fateh Ali Khan performed at both Benefit concerts that took place in New York on Oct 27 and 29,2001 along with The Beastie Boys, The Strokes, Rival Schools, the B-52's, Cibo Matto, Moby, Michael Stipe and Bono, among sets by N*E*R*D, Mos Def, the Roots and the Jon Spencer Blues Explosion.

In 2002, he worked on the soundtrack of The Four Feathers in collaboration with the American composer of orchestral and film music, James Horner. The film was directed by Shekhar Kapoor. In 2002, Ustad Rahat Fateh Ali Khan also collaborated with The Derek Trucks Band on the song Maki Madni for The Derek Trucks album, Joyful Noise. In 2006, he gave Hollywood another huge hit as his vocals were featured on the soundtrack of Mel Gibson's Apocalypto. Mel Gibson described Ustad Rahat Fateh Ali Khan vocal contribution to the score in Apocalypto:” He's a valuable asset to our soundtrack. His dulcet tones add emotion and drama, and we have a very narrow palette as far as orchestra. We do not have an orchestra so he is fulfilling a lot of the functions that would usually be supplied by the use of a full orchestra. Just all in one man; he's a one-man band”.

Rahat Fateh Ali Khan found his way into the heart and souls of audiences worldwide.

Ustad Rahat Fateh Ali Khan’s Bollywood singing career has been phenomenal. The maestro has released over 50 albums and has had over 100 hits in Bollywood and has been presented with numerous awards including Star Screen Awards for Best Male Playback 2010 and the IIFA award for best male vocalist 2011.

Ustad Rahat Fateh Ali Khan has also been a judge on top TV shows in India such a Chhote Ustad and Junoon, Kuch Kar Dikhaane Ka.

In 2014, Ustad Rahat Fateh Ali Khan released his latest album ‘Back 2 Love’. It sold millions of copies and the hugely popular song ‘Zaroori Tha’ from the album went on to top all charts in Bollywood and currently has over 67 million views on youtube.

Ustad Rahat Fateh Ali Khan was invited to perform at the Nobel Peace Prize ceremony and concert in Oslo.. His performances captivated everyone from Nobel peace prize winners, royalty, dignitaries and celebrities to the one billion people watching on television.

Ustad Rahat Fateh Ali Khan continues to perform and tour to audiences across the globe.

Ustad Rahat Fateh Ali will be performing live on 29th January 2016 at “Asian Town (Old West end Park)” in Doha and the venue have a capacity of 15000 people and we expect a full house!! . Added Mr. Jawed Khatri Managing Director of Apex Events.

As per Mrs. Sana Salman Director of Marketing at Apex Events “Our main motive is to promote Qatar as a country to top notch artists in Asia and the Asian Talents in Qatar Socio – Culture platforms. This will apparently help Asian expats in Qatar to have quality entertainment coming on their way. We sincerely thank Qatar Tourism Authority to support our initiative and helping us to put forward the biggest Asian musical performance. Residents and visitors from neighboring countries can expect a magical performance”

1.Where do you enjoy the most, singing live or recording in studio? And why?

ANS: THEY ARE BOTH TWO DIFFERENT ASPECTS OF SINGING AS RECORDING A SONG HAS TO BE IN A STUDIO AND LIVE SHOWS ARE MY REAL PASSION. SOMETHING I HAVE BEEN DOING FROM CHILDHOOD.

2. You are coming to perform in Qatar for the first time, what songs the Doha audience should expect? Will it be a mix of your film songs and Qawwalis?

ANS: I AM REALLY LOOKING FORWARD I PERFORMING IN QATAR AS I HAVE PERFORMED IN SEVERAL OTHER GCC STATES AND QATAR WAS ONE STILL NOT DONE AND THANKS TO PME, MY INTERNATIONAL MANAGEMENT COMPANY AND APEX EVENTS THE LOCAL EVENT ORGANISERS FOR MAKING THIS HAPPEN. THE PERFORMANCE WILL BE SPECIAL AND HAVE A VARIETY OF MY SUPER HIT SONGS FROM BOLLYWOOD, MY ALBUM "BACK 2 LOVE' AND OF COURSE "QAWALIS" ARE THE HEART & SOUL OF MY PERFORMANCES. THERE WILL BE A SPECIAL TRIBUTE TO MY UNCLE & USTAD "NUSRAT FATEH ALI KHAN".

3.You are ably carrying forward the legacy of Ustad Nusrat Fateh Ali Khan, should we look forward to listening to some of Khan Sahab's greatest Qawwalis?

ANS: WITHOUT THIS ANY OF MY PERFORMANCES ARE IN COMPLETE AND YES FOR SURE I WILL DO MY BEST BUT NO ONE CAN BE LIKE MY USTAD.

4.Are there any upcoming Bollywood projects you are working on?

ANS. THERE ARE SEVERAL AND I HAVE RECORDED OVER A DOZEN SONGS IN THE PAST 2 MONTHS AND THE FILMS WILL START FEATURING FROM NEXT MONTH ONWARDS.

5.Your message for the Doha audience?

ANS: "DOHA" KEEP JAN 29 BOOKED FOR A MAGICAL EXPERIENCE OF SOULFUL MUSIC AND I WILL GIVE MY VERY BEST TO ENTERTAIN YOU.