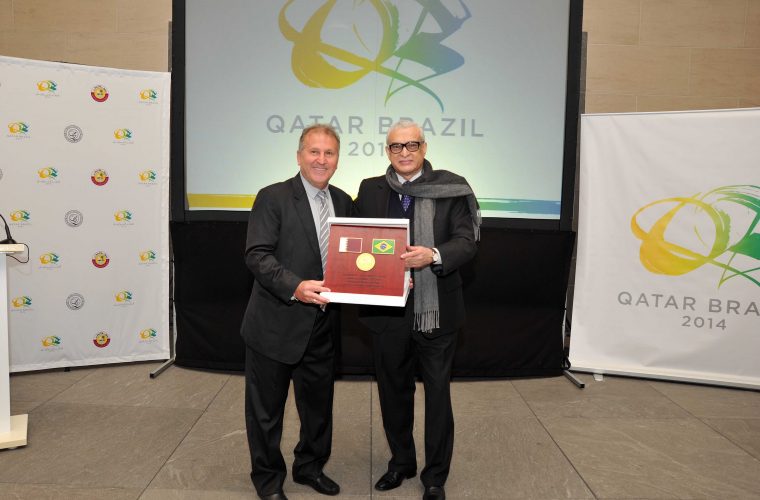 People in Qatar and Brazil gear up for year of artistic dialogue and cultural discovery, building on legacy of previous years Qatar Museums Authority (QMA) today officially announced that 2014 will be the Qatar Brazil Year of Culture, building on a legacy of connecting people through artistic and cultural exchange. Held under the patronage of QMA’s Chairperson, Her Excellency Sheikha Al Mayassa bint Hamad bin Khalifa Al Thani, Qatar Brazil 2014 will be the third consecutive Year of Culture launched by QMA, following Qatar UK 2013 and Qatar Japan 2012. The announcement was made on Qatar’s National Day in the company of several hundred guests at Qatar’s Embassy in Brasilia, Brazil. In addition to a speech by His Excellency Mohammed Al Hayki, the State of Qatar’s Ambassador to Brazil, reception attendees celebrated with both Qatar’s and Brazil’s national anthems and an assortment of traditional crafts and cuisines. Sergio Bruane Solon de Pontes, Secretary of Brazil's Ministry of Tourism and Cristovam Buarque, Senator of the Republic, were among the event’s honoured guests. The announcement follows the successful conclusion of the Qatar UK 2013 Year of Culture, which engaged more than 350,000 people in over 90 activities held in Qatar and the United Kingdom. Qatar’s Ministry of Culture, Arts and Heritage is a key partner in each Year of Culture, sending four artists to the launch event in Brasilia. “We are proud of the legacies built and partnerships created by the Years of Culture and eagerly await a year of exploring shared passions, talents and cultural links with our friends in Brazil,” said His Excellency the Ambassador Mohammed Al Hayki. Miguel Blanco, QMA’s Director of Strategic Cultural Relations added, “From a traditional souq in downtown Tokyo to Damien Hirst’s thought-provoking debut into Qatar’s emerging arts scene, I am confident that we will reach new heights with Qatar Brazil 2014. The Years of Culture truly embody QMA’s wider philosophy and objectives, nurturing artistic talent, creating opportunities and developing the skills to service Qatar’s emerging art economy” Qatar and Brazil have enjoyed close cultural and educational ties in recent years with the launch of several initiatives and high-level visits exploring future collaboration in those areas. Both nations share a passion for football that will guide several activities in the upcoming year. 1 of 2  “Focusing on culture, community and sport, Qatar Brazil 2014 will start with a packed year of events in both nations and continue for generations to come,” said Qatar Brazil 2014 Project Head Rafah Mouafak Barakat. The Qatar Museums Authority is committed to consolidate Qatar’s efforts to become a vibrant center for the arts, culture and education, fostering ideas and nurturing artistic talent. Through the past Years of Culture the QMA has built lasting legacies between Qatar and the people of Japan and the United Kingdom: launched during Qatar Japan 2012, the $100 million Qatar Friendship Fund continues to help Japan rebuild after the devastating 2012 tsunami while an ambitious partnership between the British Library and Qatar Foundation continues to digitise more than 500,000 pages of historical documents following Qatar UK 2013. - ILQ News -