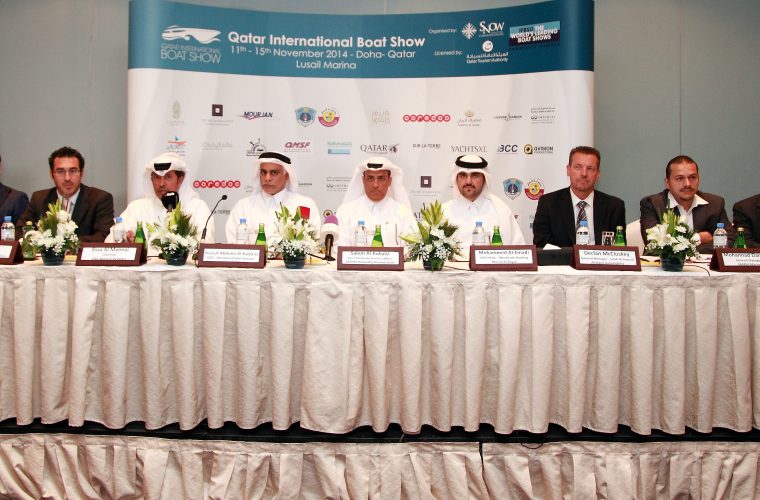 With less than two weeks to go before the start of the second edition of the Qatar International Boat Show (QIBS) – that is to be held from 11-15 November 2014 at Mourjan Marinas in Lusail City under the auspices of HE the Prime Minister and Interior Minister, Sheikh Abdullah bin Nasser bin Khalifa al-Thani – the organisers, Snow Comms, say that bookings from exhibitors have now reached full capacity, despite the show being double the size it was last year.

A high percentage of international exhibitors representing many of the top names in the maritime industry will be there, together with a huge number of repeat exhibitors, and a total of 60 boats on display.

Snow Comms Conceptual Communications & Events – the organiser of the Show – has also recently been admitted as the first candidate member of the International Federation of Boat Show Organisers (IFBSO) just weeks before the opening.

Founded in 1964, IFBSO brings together more than 30 of the world's leading boat shows and marine and maritime trade exhibitions. Members of IFBSO own or operate events in 24 countries on four continents. All members are required to comply with the IFBSO Code of Excellence, ensuring that they meet the highest expectations of exhibitors and visitors alike.

Faysal Mikati, Vice President of Snow Comms, says that the IFBSO worked hard to admit his organisation early, in time for the 2014 edition of QIBS. “IFBSO pulled out all the stops for us, which is testament to the high regard that QIBS has already generated in the industry after only one show. We will be joining an elite family of member shows, including Monaco, London, Düsseldorf, Miami, Istanbul, Dubai, Amsterdam, Shanghai, Barcelona, Genoa, Fort Lauderdale and others; but given that some other well known boat shows have still not yet been officially recognised by IFBSO, we take this as a great honour indeed.”

Commenting on the layout of this year’s edition of QIBS, Mikati said that as well as the Marina Display, an External Area, Shipyards and Boatyards, Equipment Accessories and Services, there will also be a new section this year devoted to luxury products and services. These areas will be topped by a unique Floating Media Lounge and also one of the most atmospheric VIP areas of all boat shows worldwide!

“Arrangements for next month’s show are going so well,” he affirmed, “that we have even started work and set the dates for the 2015 edition of QIBS in Doha as well!”

Yousuf Abdulla Al-Kubaisi, CEO, Ooredoo Global Services (OGS), said: “Ooredoo continues to support initiatives that connect with the aspirations and ambitions of the people of our country. Our work with the maritime community in Qatar provides us with a deep understanding of their specific communication needs, and we are pleased and proud to be working with the Qatar International Boat Show to bring the latest innovations to our shores.”

Declan McCluskey, General Manager, SH Almana Automobiles said: “Saleh Al Hamad Al Mana Co., the exclusive agent of Nissan, Renault & Infiniti, is proud to support Qatar International Boat Show 2014 as a premier yachting and lifestyle event. At Saleh Al Hamad Al Mana, we are focused on excellence and customer satisfaction, attributes that have enabled us to emerge as market leaders. QIBS’ focus on excellence and their pioneering spirit resonates with us in developing and strengthening Qatar’s industry. Together, we hope to create a world class event of the highest standard in the country.”

Salem Al-Kubaisi, Chief Corporate Services Officer, Katara Hospitality, said: “The Qatar International Boat Show is one of several key catalysts in helping to shape a ‘new Doha’. Echoing its history as a maritime destination, Doha has become a modern, thriving maritime hub for the twenty first century. Murwab Hotels is thrilled to sponsor an event that shares the same goals and aspirations for Qatar and its industries as us – preserving our heritage, promoting economic growth, championing innovation and a commitment towards building a legacy for future generations.”

Mr. Mohammed I Al-Emadi, Unit Head, Wholesale Banking at Masraf Al Rayan, said: “Masraf Al Rayan, as the Official Bank Sponsor of the 2014 Qatar International Boat Show, is pleased to announce its new Sharia compliant product, ALRAYAN YACHT/PLEASURE BOAT FINANCING, designed specially to meet the different needs of selected buyers, to be launched at the beginning of the event on November 11th 2014. “Through this new partnership with QIBS, we aim to reflect the very best of Qatar to the world, and to establish Masraf Al Rayan’s brand as a supporter of such premium and luxury event in Qatar.

Mohannad Darwish, founder, Marsa Marine, said: “As a Qatari company, it is important to have a platform like QIBS to showcase our services in a rapidly growing local and regional market. It is also great for local businesses to collaborate with international companies and offer complementary products and services. Qatar has a rich marine history and it’s important for us to build on this and strengthen our manufacturing and service capability in this arena. We are pleased with the support of the government and our partnership with QIBS and are looking forward to a strong and successful Boat Show in 2014 and beyond”.

“QIBS is being increasingly recognised around the world as a major shop window for boats and services in the maritime industry, especially in the Gulf Region,” Mikati summed up. “We have no doubt that next month’s Show will be highly successful; and then all we will have to worry about is how to better that once again in a year’s time from now!”

About Snowcomms Snowcomms in Qatar is trading under the name of AL MANNAI EVENTS WLL, since 2011. Snow Comms offers innovative industry knowledge and strategic guidance on all aspects of Public Relations, Event Management, Digital Marketing and Creative. In 2007, Snow Comms opened an office in Qatar covering the Middle East region and following continued growth, 10 additional representative offices have since been established throughout the world. Snow Comms now has presence in Qatar, Cyprus, Greece, Lebanon, UAE, Oman, Morocco, UK, China, France, Denmark and Georgia