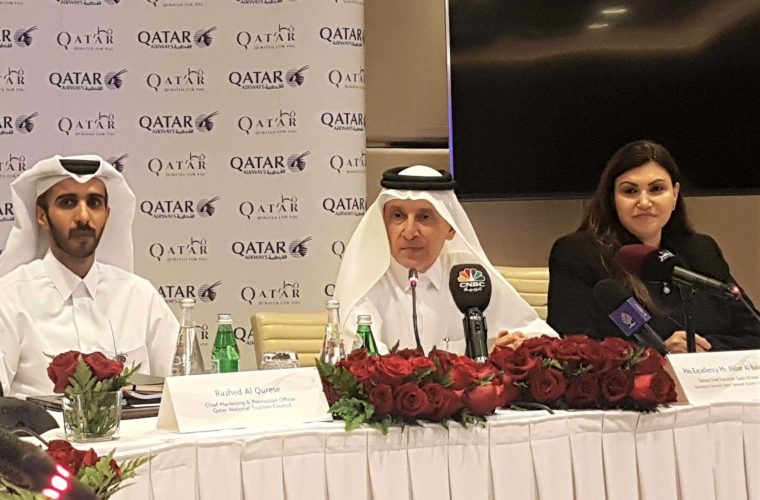 Qatar Airways has gone to extraordinary lengths to ensure thousands of football fans will be there to cheer on their teams and enjoy incredible entertainment during their stay in Doha.

Larger aircraft will bring additional capacity on services from Kuwait and Oman for fans of the Arabian Gulf Cup, while special charters from Monterrey and Rio de Janeiro ensure supporters will not miss their team's appearance at the FIFA Club World Cup Qatar 2019.

Starting on 4 December, music concerts in the Qatar Live line-up of events feature the very best talent from the Middle East performing at both Katara and Doha Exhibition and Convention Centre (DECC). A line-up of international DJs will headline the Daydream Festival on 12 and 20 December at the Ritz-Carlton, Doha, followed by international stars Katy Perry, Maroon 5, and Maluma between 15 and 19 December.

At a media roundtable in Doha today, HE Qatar Airways Group Chief Executive and Secretary-General of QNTC Akbar Al Baker, said: "We look forward to welcoming visitors from across the globe to Qatar this month to enjoy world-class football, the best musical talent from the region, and more. Qatar Live is part of a wider strategy to expand Qatar's calendar of events by leveraging the major sporting competitions that the country is proud to host. To celebrate this exciting blend of sport and music, Qatar Airways is offering fantastic travel packages for fans from Oman and Kuwait to fly to Doha to support their teams."

Following Qatar Live is an exciting program of events in 2020, including Shop Qatar (7 to 31 January), Doha Jewellery and Watches Exhibition (24 to 29 February), Qatar International Food Festival (24 March to 2 April), and Doha Design Week (18 to 28 March). This is in addition to the year-round activities on offer in Doha such as outdoor adventures, cultural attractions, and fine dining.

A multiple award-winning airline, Qatar Airways was named 'World's Best Airline' by the 2019 World Airline Awards, managed by Skytrax. It was also named 'Best Airline in the Middle East', 'World's Best Business Class', and 'Best Business Class Seat', in recognition of its ground-breaking Business Class experience, Qsuite. It is the only airline to have been awarded the coveted "Skytrax Airline of the Year" title, which is recognized as the pinnacle of excellence in the airline industry, five times.

Qatar Airways currently operates a modern fleet of more than 250 aircraft via its hub, Hamad International Airport (HIA), to more than 160 destinations worldwide. The world's fastest-growing airline has added several exciting new destinations to its growing network this year, including Rabat, Morocco; Izmir, Turkey; Malta; Davao, Philippines; Lisbon, Portugal; Mogadishu, Somalia; and Langkawi, Malaysia. The airline will add Gaborone, Botswana in 2019 to its extensive route network along with Luanda, Angola; and Osaka, Japan, in 2020.