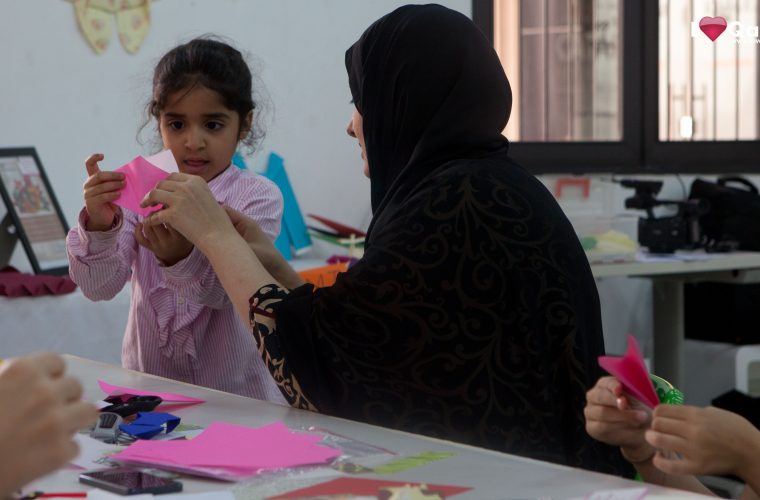 I had always wanted to try my hand at origami, the ancient art of paper folding since I was young, but had always dismissed it as being too fiddly or tricky to learn and where did I find those beautiful papers to fold into all those great and seemingly complicated shapes? 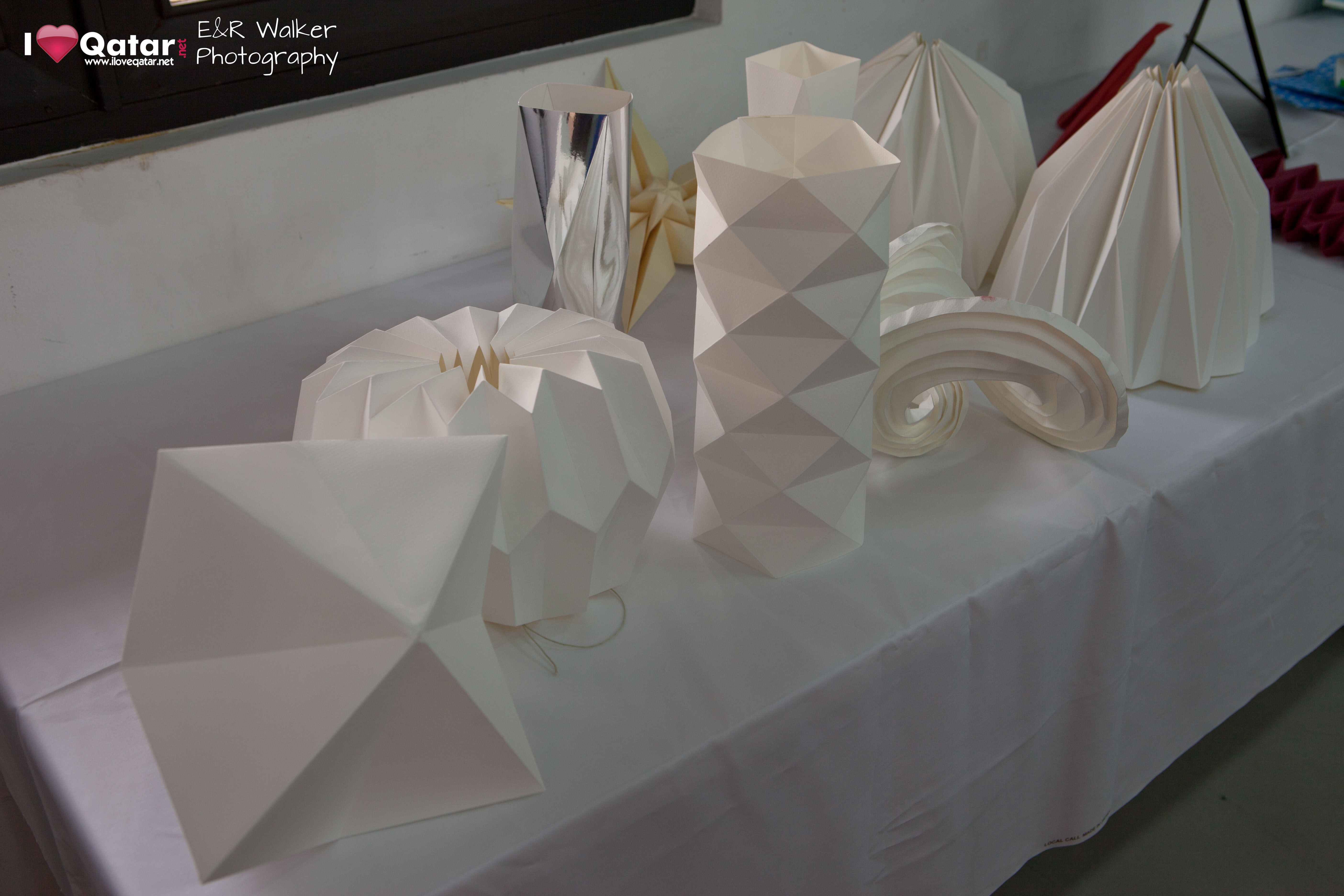 Perusing the Katara website last month, I came across a colourful advertisement for an “Origami Family Workshop by Afsheen”, taking place every Saturday from 2-7pm at Katara Art Studios, Building 19 until the end of June; so decided to sign up and assuage my paper folding curiosity. 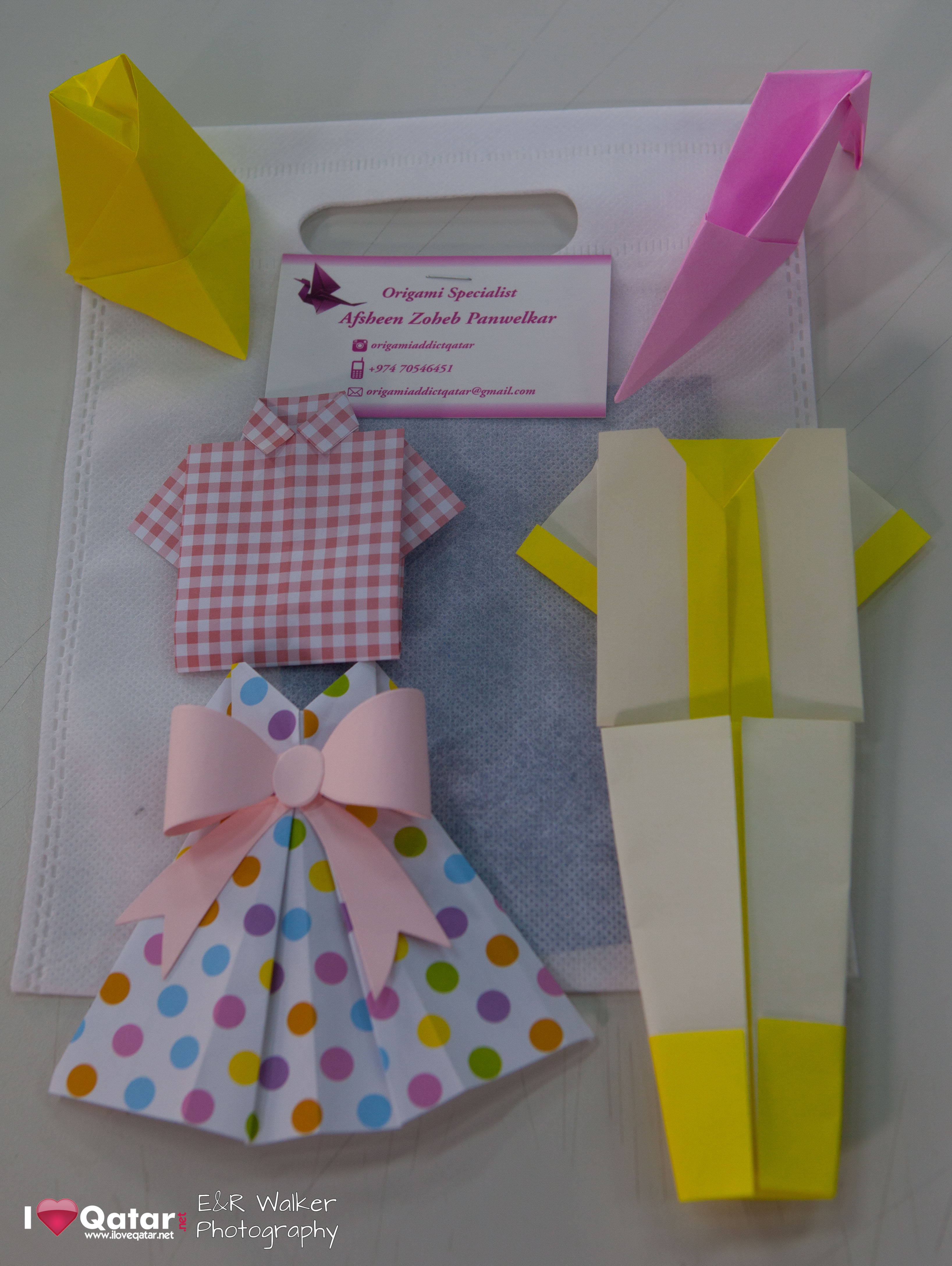 I finally had a space in my agenda today, Sat 4th April, so excitedly headed down to Katara for my first class; today’s theme being “Fashion and Back to School”. Afsheen welcomed me into her classroom and pointed out a table full of completed designs that we were to attempt that day; colourful polka-dot dresses, matching shoes, a cute baseball outfit, a mini checked shirt, a tie and a bow tie. 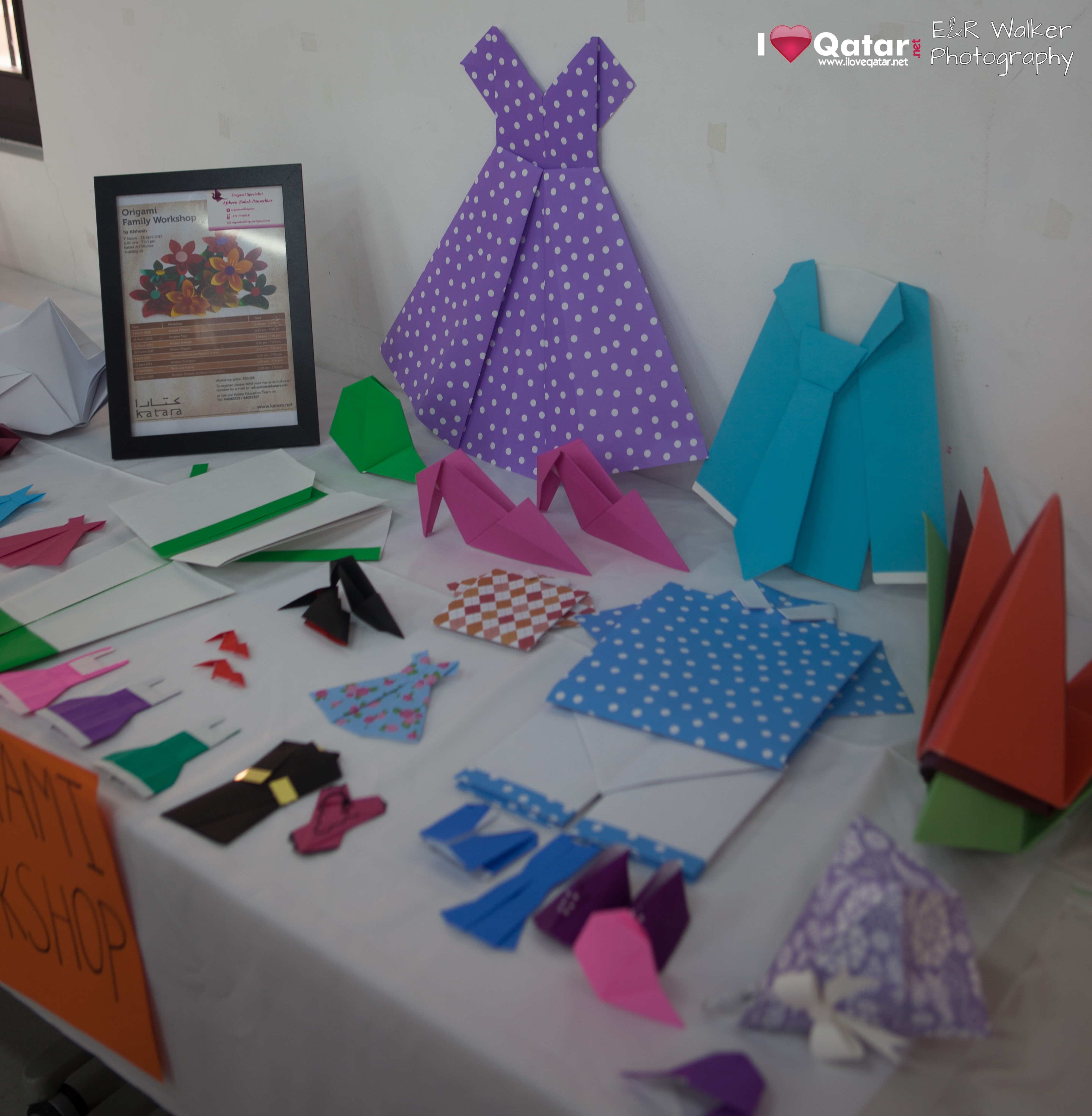 I was happy to see eager learners of all ages in the class from school kids, a mother supervising her two young daughters, teenage girls and students from VCU Qatar and the old-timer of the class; myself (who let’s say, is approaching middle age). 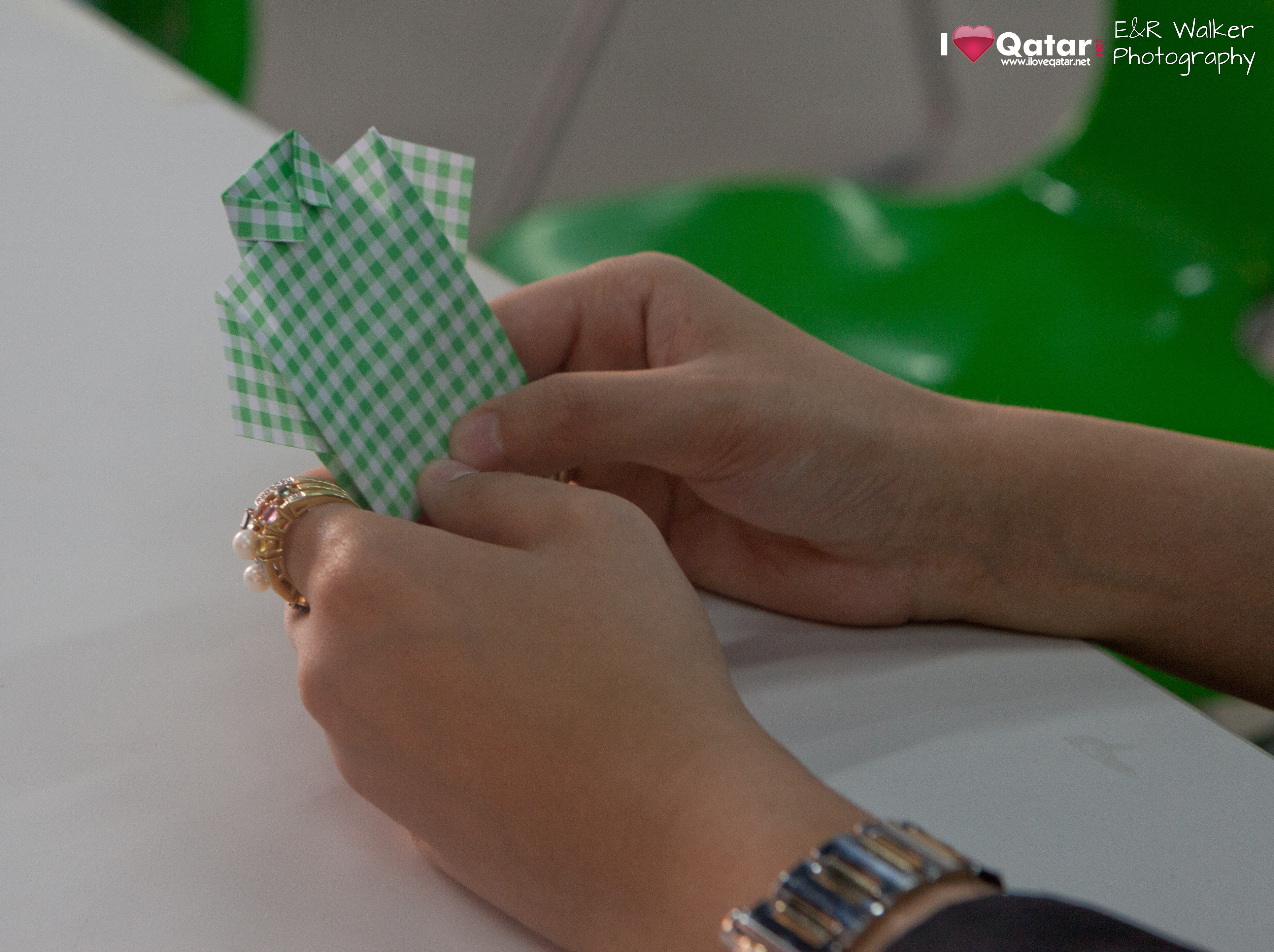 After choosing our papers, Afsheen showed us step by step how to create each design, helping us if we got stuck along the way (which I frequently did, although the designs are not complicated!). We all enjoyed it immensely, had quite a few laughs along the way and were eager to learn more at a later date. 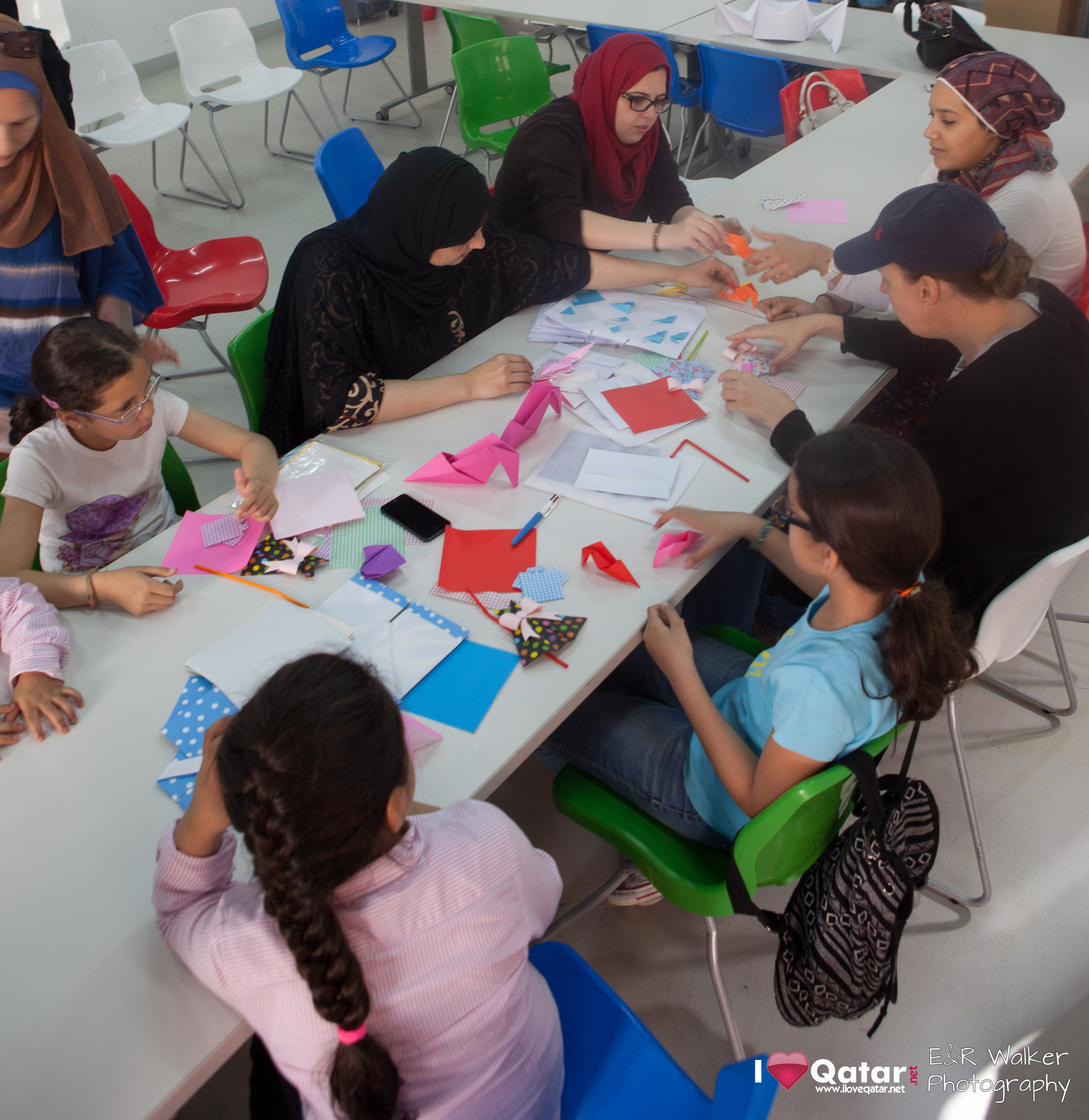 Afsheen has extended her classes from the end of April to the end of June, 2015 and each Saturday will focus on a different theme, such as: Land & Aquatic Animals, Birds & Insects, Flowers, Toys & Adventure, Clothes & Fashion, Transport, Decorative Packing & Wrapping and Modular Origami and Basic Tessellation. 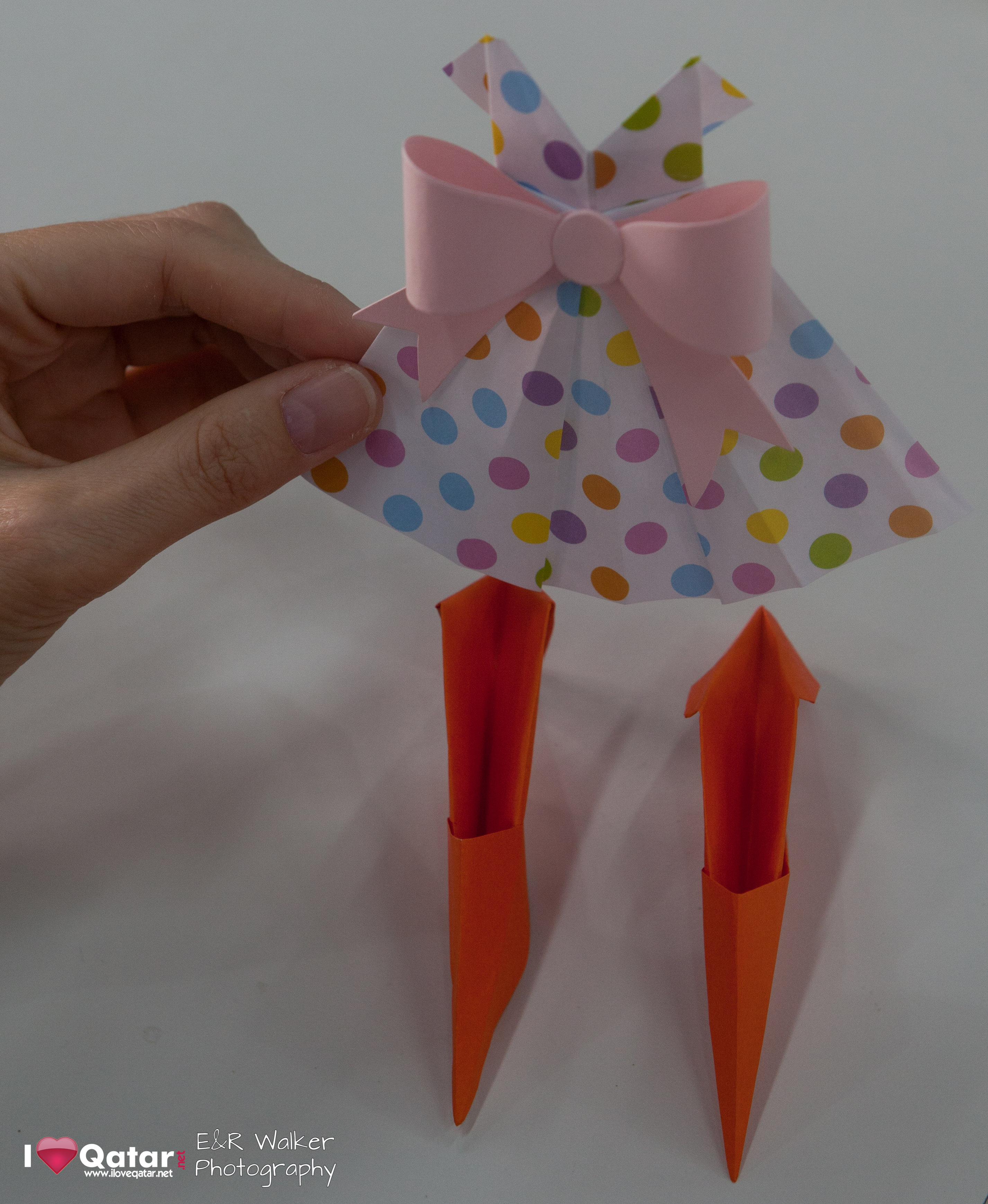 The classes last approx. 2 hrs 30 mins; the first one starting at 2pm and the second at approx. 4.30-7pm The classes are suitable for young and old alike, but it is probably advisable for younger children to be supervised by a parent. The cost of attending is QR 100 per participant. Details of each weeks’ theme can be found on the Katara website (not currently updated with the extended course program from 25th April – 27th June, 2015): http://www.katara.net/english/program-tickets/

After the class, I asked Afsheen a few questions about how she got involved in origami:

Afsheen, when did you first get involved in origami?

I started in origami, making paper folds and art 2 years back, but officially started teaching and exhibiting my work when I joined the Qat Art community, which exhibits and holds a market at Katara every alternate Friday from October to March. So that’s how I got the opportunity to exhibit at Katara and conduct the workshop at Katara.

How many hours a day do you practice your origami?

I practice approx. 10 hours a day making new origami folds, because it’s not that easy to initially make new folds. Some designs take an hour, others take 2 hours to do and some can take up to 10 hours at times!

Do you follow videos or read books when practising?

I have a few books, but most of the time I follow videos. I’m a self-taught Artist and a lot of origami designs are not available online, such as on YouTube or Google, there are just pictures, so I try to understand the folds and follow the videos or book photos.

Do you have any upcoming events happening on origami here in Qatar?

I’ll be continuing this Origami Workshop at Katara for another 2 months (until the end of June, as mentioned previously), as Katara have extended them from April 25th and any other events will be announced in due course, when details have been finalized. 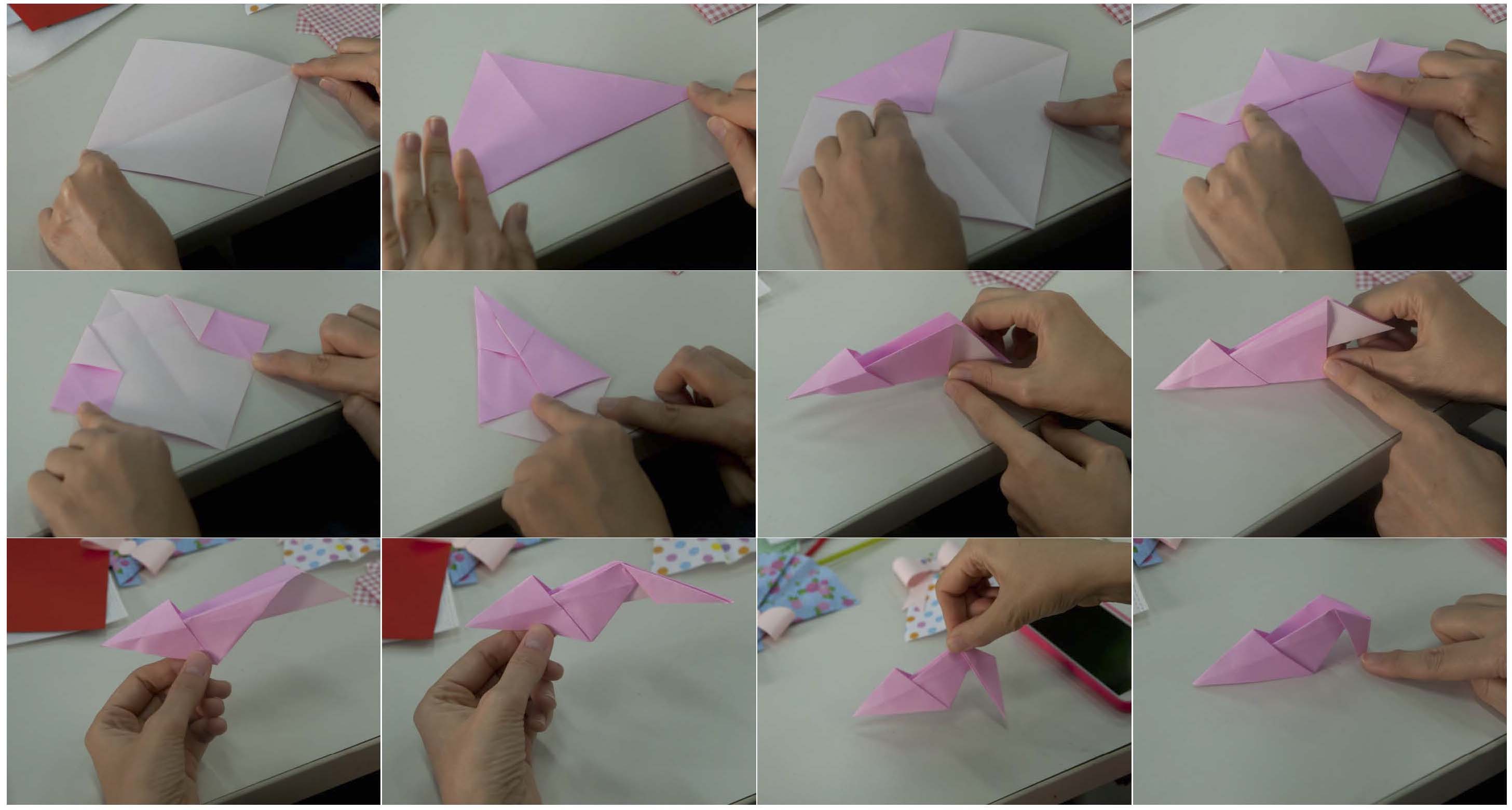