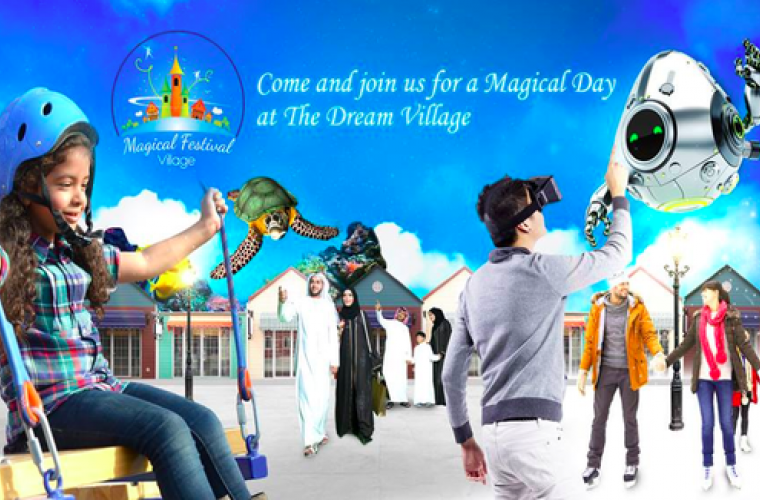 A stellar shopping and entertainment destination has emerged in Katara with the multi-million riyal Magical Festival Village that launched on Thursday.

Spread over 40,000sqm, the European designed village features 400 shopping boutiques from 20 countries, more than 20 restaurants and cafes with a seating capacity for 800 diners and a number of family entertainment options. “We have the big 300sqm trampoline, the ice skating rink which is more than 600sqm, 500sqm obstacle course for children and the Fort Castle which is being given final touches and will likely open this week,” said Al Mohannadi.

Even weeks before the opening of the village, the iconic Castle has generated much attention to Katara visitors, many of whom took to social media posting photos with the stunning blue palace. “The palace has two features, one is a studio which uses Virtual Reality technology to transport children to their favourite cartoon characters. It also presents a ten-minute show of movies using 3D mapping technology,” he said.

True to its name, the Magical Festival Village will be hosting festivals regularly. Set to add excitement to the village, a number of festivals has been lined up including the Smart Science Festival, Fantasy and Laughter Festival, and the Chocolate Cupcake Festival, to name a few.

The streets of the Village will also host free entertainment activities such as daily carnivals, musical corners, and a plethora of other shows that will pop up to surprise visitors.

The project was implemented in cooperation with a number of government and private entities including Katara, Ezdan Holding Group as strategic partner and Media Works, as general contractor.

Saif Saad Al Said Al Dosari, Katara Human Resources Director, said it is Katara’s goal to invest in facilities which provide diverse environment and activities which will contribute to the advancement of cultural movement and promotion of tourism in Qatar.

“We are working to strike a balance between what is cultural and what is profitable. We invest on cultural buildings and facilities to achieve profitable revenue to support the organisation’s activities and events,” he said, stressing Katara’s keenness to host only high quality events and activities.

Ezdan Group CEO Ali Al Obaidli said, “Our partnership in this project stems from our desire to create a stronger communication with the community. We seek this through projects that would provide an exclusive family shopping and entertainment outlet over a large area.”

He said the Group’s decision to enter this strategic partnership is derived from its approach towards investing in the entertainment sector, especially malls and that the company also plans to organise events to stimulate hospitality in the state and contribute to making Qatar one of the best regional tourism destinations, especially for GCC citizens. The village is open for the next three months, from 3pm to 11pm during weekdays, and in the mornings on Friday and Saturday. For the next season, it will open from October to May. (Source)