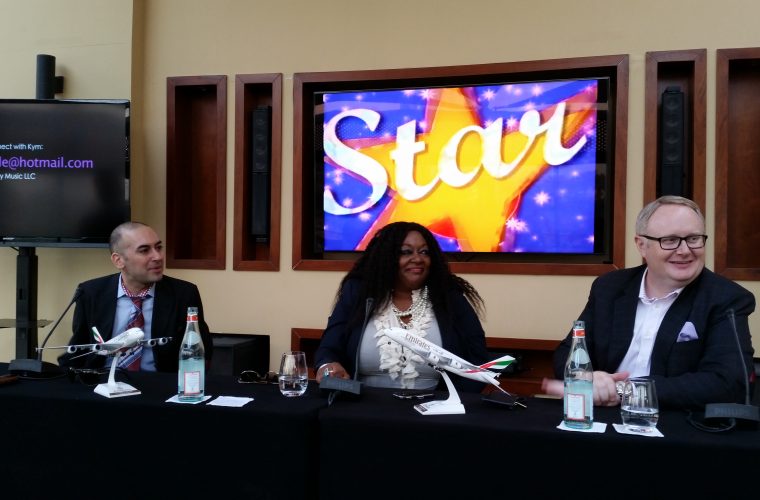 Kym was in town to talk about headlining the New Year’s Eve, Rocca “Under The Stars” Party on Dec 31st, 2014 at the Grand Hyatt Doha, an event that promises to transport you back to the 80’s and 90’s with “Songs to make you feel good”, according to the bundle of energy that is Kym Mazelle. She will also be singing her world famous cover of “Young Hearts Run Free”, which featured in the 1996 movie “Romeo and Juliet” starring Leonardo DiCaprio, tributes to The Jackson 5, songs from her time working with Soul II Soul, her new single, “Change” and the soon to be released track, “Lovin” in collaboration with David Morales. There will also be a full live band, “Groove Office” and a DJ to play you into 2015: an event not to be missed!

Kym recounted stories from her childhood in Gary, Indiana, living 2 doors down from The Jackson 5, her passion for Gospel music, which led her to be a successful Gospel vocalist by the mid 80’s and how she became a Pioneer of House Music, leading it from the U.S.A. into Europe. Ms. Mazelle has collaborated with many world-class Artists and Producers such as: Van Morrison, Mick Jagger, Boy George, R. Kelly, Joaquin Cortes, The Blow Monkeys and the flamboyant Grace Jones. She has enjoyed a number of world wide hits such as “No More Tears (Enough is Enough)” with Jocelyn Brown, “Wait” with Dr. Robert of The Blow Monkeys, “Useless (I don’t need you Now)” with Producer Marshall Jefferson and “Missing You” in collaboration with Soul II Soul, amongst many others, in a career spanning over 25 years.

Kym then answered questions from the Press and revealed that she has enjoyed visiting Qatar on several occasions in the past in association with Coco Latte, taking part in events such as “Reggae Sun Splash” and visiting several of our tourist sights, such as Souq Waqif and the Corniche to see traditional dhows and the famous Pearl Shell Monument, as well as enjoying some camel rides. She stated that her favourite artists to work with are Mick Jagger and Chaka Khan, that her favourite music to listen to is Gospel, that she doesn’t play any musical instruments, but does DJ, is a big fan of the American Singer-Songwriter and Musician, Bobby Womack and that her life quote is: “Respect the people who respect you”. Kym provided the Press with a fun and interesting Press Conference and we look forward to welcoming her back to Qatar this New Year’s Eve.

Details of the New Year’s event, Rocca “Under The Stars” at the Grand Hyatt Doha can be found at: