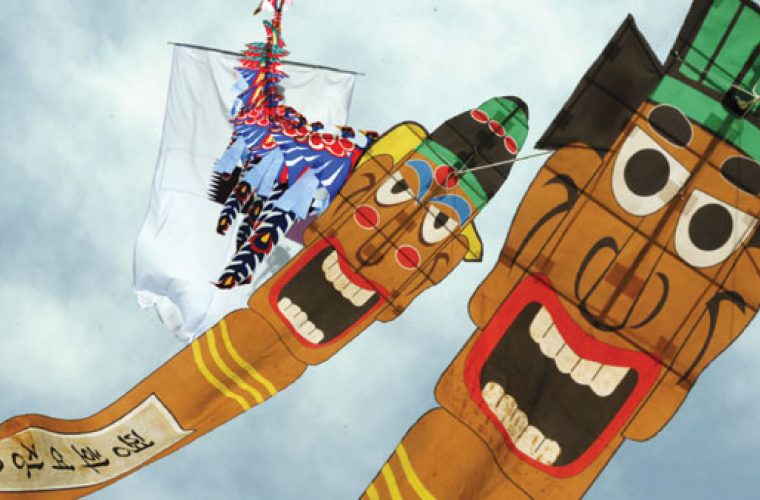 Two colourful “train kites,” including one as much as 800m long, highlighted the two-day “Magnificent Korean Kite-flying Event” that was launched yesterday at the Museum of Islamic Art Park. The show will conclude today at the Katara-Esplanade.

“The kite-flying activity celebrates the 40th anniversary of diplomatic relations between Korea and Qatar, which was established in April 18, 1974,” Bumil Park, consul at the South Korean embassy told Gulf Times on the sidelines of the event.

Members from the Korean Kitefliers Association (Kokfa) arrived on Thursday and brought eight kites from Korea, he explained.

Kokfa president Kitai Rhee said the kites featured during the occasion are only a fraction of the kites usually flown during kite-flying events in Korea. The size of most of the kites has made it difficult for the group to bring more kites to Qatar because of their weight, he said.

“There should have been more kites flown in from Korea but we decided to bring only eight since most of the bigger kites are very heavy to ship out of the country,” explained Rhee, in Qatar for the first time.

According to Rhee, the 800-m-long “train kite” is called the “Phoenix” and is composed of 130 kites. Aside from its length and vibrant designs, the Phoenix also carried a large flag of Qatar in the middle of the stack.

A traditional Korean train kite is made of many kites stacked on top of each other and are separated by a distance of about 3ft.

The Phoenix’s smaller counterpart is a train kite composed of only 36 kites. But it is adorned by a stack of kites bearing the Korean flag and other cultural designs.

Park noted that the designs of each kite are not only for aesthetics but to highlight the main kite located at the tip of the “train.”

“In the case of the Phonenix, since the bird is at the tip of the train it would make it difficult for people to see it hence, the colourful designs of the other kites would guide spectators to the main kite,” he said.

Aside from the two train kites, spectators were also thrilled by the aerobatic maneuvers of a sports kite while a 4-metre long “Nemo” fish kite was among the crowd favourites.

“The anniversary celebrations started since last Tuesday where artists from Korea held a cultural show at the Ritz -Carlton Doha to showcase our country’s rich culture, heritage, and cuisine,” Park said.

Last Thursday, Park added that the performers were at the “Qatar-Korea Culture Show” held at the QNCC Theatre. This time they performed together with Qatar’s very own The Pearl Group, he added.

Today’s kite-flying event at Katara Esplanade (opposite the Amphitheatre) is from 10am to noon (opening ceremony and kite flying demonstration), 3pm to 4pm (kite flying demonstration), and 4.30pm to 5.30pm (kite making workshop, for a limited number of people). The celebrations are hosted by the South Korean embassy in Qatar and sponsored by Qatar’s Ministry of Culture, Arts and Heritage, and RasGas.