James Reid and Nadine Lustre take it from reel to real, from Middle East to Europe via JadINe LOVE World Tour 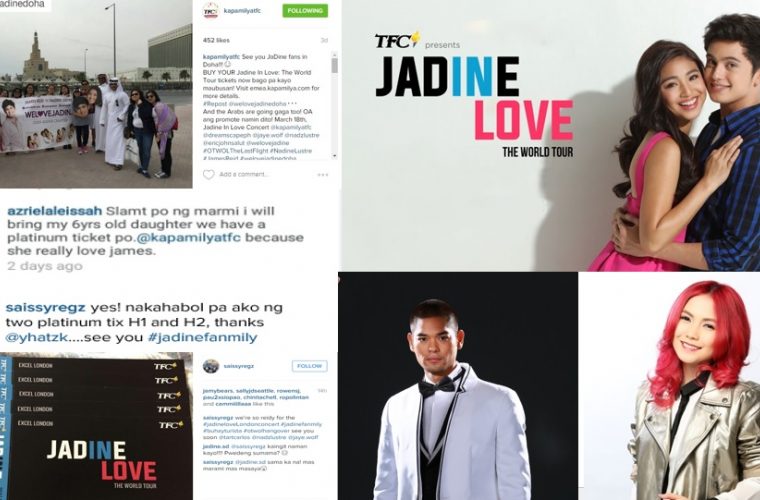 What started as an experimental team-up between James Reid and Nadine Lustre via 2014’s “Ang Diary ng Panget” has now become one of the most breakthrough Filipino love teams in the world, more popularly known as JaDine. The love team has definitely scored breakthrough after breakthrough and their transcendence from reel to real-life partners has for fans, become the fulcrum of the love team’s success.

This March, fans of the phenomenal love team will finally get to see the real-life couple via JadINe LOVE World Tour in Doha, Dubai, London and Milan. Right on the heels of their
4 million internet-breaking tweets, all-time high rating On the Wings of Love (OTWOL) finale wedding, James and Nadine will bring the kilig moments to the Doha Convention Center, Qatar on March 18; to the Al Nasr Leisureland, Dubai on March 19; to the ExCel, London on March 26 and to the Palasesto, Milan on March 27.

In a short span of time, the JaDine fever has grown as they’ve transcended from movie (2014’s “Talk Back and You’re Dead” being their second), music, to television via the phenomenal “On the Wings of Love.” Now, the two are taking the concert scene by storm as well.

Kicking off at the OTWOL Certified Kapamilya Fans Day in Sacramento California in January and after performing to an SRO crowd in Araneta Coliseum in the Philippines, JaDine will perform their iconic hit “Bahala Na,” “On the Wings of Love” theme and more at the Middle East and Europe leg and fans’ excitement are hitting the highest level.

Their fan base has also captured all ages from parents to their young kids.

Azrielaleissah shares over the social media: “Salamat po ng marami. I will bring my six-year- old daughter. We have a platinum ticket po @kapamilyatfc because she really loves James.”

The JaDine fever has even ‘hit’ foreign nationals as Arabs are also enamored by the beautiful and talented couple. @weloveJadINedoha shares over Twitter: “And the Arabs are going gaga too! OA ang promote namin dito!“

Official JadINe merchandise are available at the venues on the concert dates.

JadINe LOVE World Tour happens March 18 at the Doha Convention Center in Qatar; March 19 at the Al Nasr Leisureland in Dubai; March 26 in ExCel London; and March 27 at the Palasesto in Milan. Dubai tickets are already sold out but Kabayans in Doha, London and Milan can still get the chance to see JadINe LOVE World Tour. Visit emea.kapamilya.com for more information.