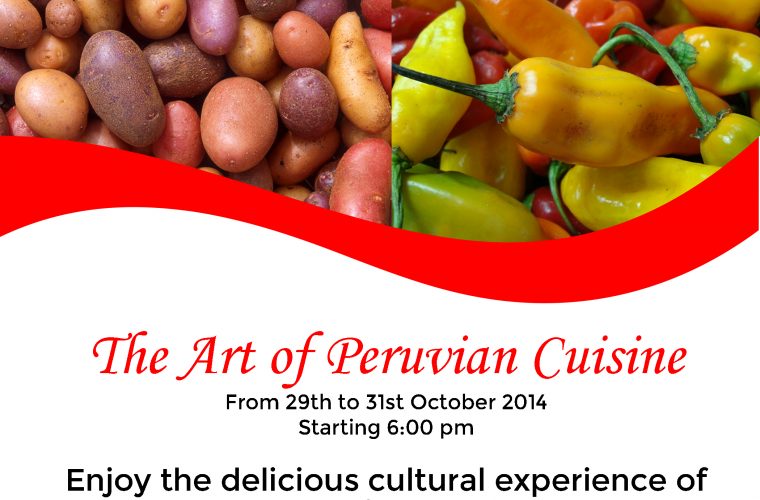 Ahead of the Peruvian Food Festival to be held at Caminito at Zubarah Hotel, we had a chance to catch up with the Ambassador of Peru, Julio Jorge Guillermo Florián Alegre.

Ambassador Julio has a passion for Peruvian cuisine that he wishes to pass on to the resident of Qatar during his tenure here. No wonder that during the past two years, there have been six Peruvian Food Festivals in Doha. The next one is coming up from Oct 29th - 31st at Zubarah Hotel to celebrate Dia De la Canción Criolla - the day to celebrate the criollo culture of Peru.

Peruvian Food is a fusion of fusions with influences from Arabic cuisine (when the Arabs entered Spain) and Spanish cuisine (when Spain conquered Latin America). The African slaves also sprinkled their influences in what is now known as the Peruvian Cuisine.

The 3000 different varieties of potatoes, native and unique Peruvian Chilli make up for a large part of the cuisine with heavy use of meat. Ambassador Julio grew up in a family of cooks and has since then appreciated the unique flavour of the Peruvian Kitchen. His favourites are the Seafood Ceviche and the Anticuchos de Lomo (Tenderloin skewers macerated in special Peruvian Chili). He insists he makes a mean steak at home.

Though he is not a fan of desserts, Ambassador Julio cannot resists an Alfajor - a traditional confection made with flour, honey, almonds and several spices, such as cinnamon. The alfajor is a testament of the Arabic influences on Peruvian cuisine since the name itself is derived from Arabic.

On October 31st - Dia de la Canción Criolla at the Caminito restaurant in Hotel Zubarah will be a glimpse of the streets of Peru with music, dance and delicious food and The Embassy of Peru in Doha invites Doha to join them.

You can book your table for the Peruvian feast by calling Caminito at 4447 0000.