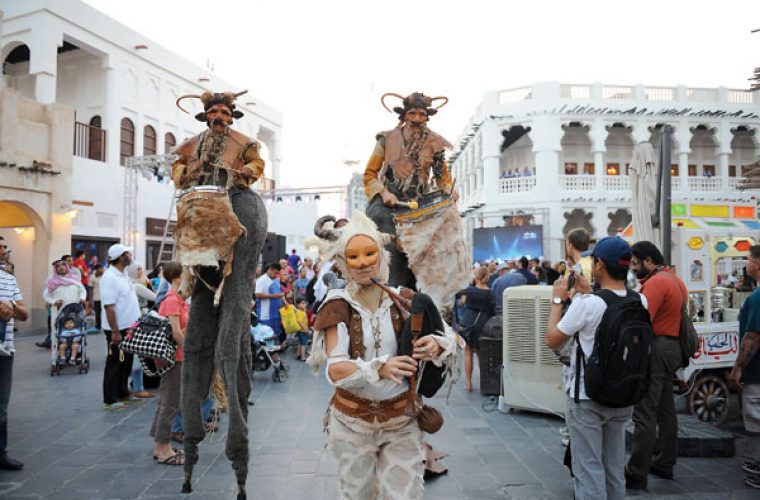 Souq Waqif was chock-a-block with visitors trooping in as early as 3pm yesterday to witness shows and attractions as part of the annual Souq Waqif Eid Al Adha festival.

Traffic snarls were a normal sight on Grand Hamad and Ali bin Abdallah streets leading to the venue with hundreds of vehicles seeking parking spaces in the souq and nearby areas.

Seven parking areas have been allotted for the six-day festival, two of which are in the souq and the others near the Sheikhs Mosque, Fanar, Al Najada, banks and mid-city parking.

Al Rayyan Theatre also witnessed a huge crowd of children who watched a new take on the story of Cinderella. The musical play employs humour and music consisting of songs since the 1980s.

Garbed in flamboyant costumes, the 15-member cast belted songs such as New Wave hits Nothing’s Gonna Stop Us Now, You To Me Are Everything and She’s Like the Wind and current One Direction hit You Don’t Know You’re Beautiful appealing to children and adults.

Cinderella shows are staged twice at the theatre, with the first at 4.30pm and the second at 7.30pm.

Tickets priced from QR50 to QR200 can be bought at Virgin Megastores and online or at the box office at the theatre.

Stilt walkers and street performers roaming around the souq’s alley brought smiles to passers-by with their unique costumes and antics.

Several folk bands and singers enthralled music lovers at three areas in the souq where stages were erected for their performances. Sout Al Rayyan’s music festival also returned with nightly concerts in a huge amphitheatre built near Al Koot Fort.

The festival features 12 of the best singers in the region enthralling Arabic music lovers for six nights with shows starting at 9pm.

There is also a Circus Show which offers two performances from 5pm to 6.30pm and 7.30pm to 9pm.

Among the featured acts are Flying Trapeze, Russian swing, magic and illusionist, the Amazing Cycles, Globe of Danger and Wheel of Death.