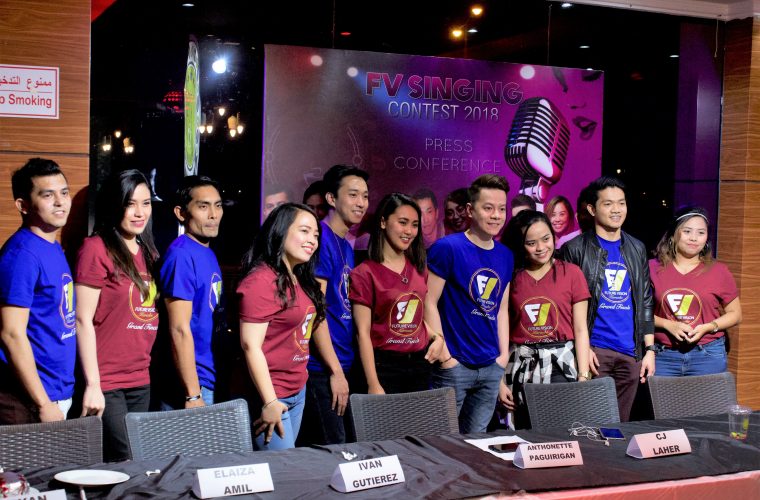 With the aim of becoming Doha's capital when it comes to discovering raw voices, FVCQ has been in the hunt for aspiring singers and performers in Doha to join their then-Karaoke Contest which started taking in applicants every Thursday night since more than 2 months ago.

After 6 rounds of weekly eliminations, FVCQ's 10 Grand Finalists (GFs) for the FVSC 2018 were finally introduced after a well-esteemed panel of media people last Thursday night (November 1) and the 2-hour press conference that unfolded was met with both entertainment-wise enjoyment and giggles as the press throws fun and relevant questions to FVCQ's 10 GFs who were all-smiles while answering them.

Before the Question and Answer (Q&A) portion, the press, the contenders' supporters, and the exclusively-invited guests rode the time machine as the 10 GFs—who each represent their own Philippine province—performed their best 90's hits!

GF #9 Sarah Mae Samson, representing the province of Cavite, kicked off the first batch with her soulful rendition of the 1992 SWV hit 'Weak.' Her stage act was followed by more 90s singers' hit songs including those from The Cranberries, Celine Dion, R. Kelly, Gloria Gaynor, and boyband A1.

Capping off the first half of the press conference is GF #8 Kristoffer Quiambao of Bataan province who effortlessly belted R&B royalty Sisqo's 1999 chart-topper 'Incomplete.'

The Q&A session lasted longer than expected due to the GF's eagerness to really go into details when answering music-related and personal questions and the press' admirable dedication to carefully discover which of the ten hopefuls deserve the top prize.

Speaking to ILoveQatar.Net, FVCQ branch manager Mr. Saad Loucif said that while the idea was originally conceptualised for all nationalities, he decided to make it exclusively just for Kabayans as he thinks that the Filipino community in Qatar has countless of raw talents yet to be discovered and that "they have some of the best singers in the world."

The best numbers of the night—according to the press people and the eliminations night judges—came mostly from the upbeat performers including GF #7 CJ Laher's 'Man! I feel like a woman,' GF #2 Stihla Grafil's 'Believe,' and GF #3 Bryan Lisbo's 'Bailamos.'

The Grand Finals is happening on November 15, 2018 from 8PM onwards at Future Vision Cafe Qatar's Al Sadd branch. Besides cheering and sharing their individual performances on Facebook, you can also support your favourite Grand Finalist by purchasing any of FVCQ's drink and food items on the day itself.

The FV Singing Contest 2018 is made possible by No Script Productions and brought to us by Vodafone Qatar, Fujifilm Qatar, Inspire Me QA, Cosmopolitan Events Qatar, and Filipino Vloggers in Qatar.

Are you a fan of singing contests in Qatar? If yes, do you already have your bets among the 10 Grand Finalists of the FV Singing Contest 2018? Drop us a line in the comments and also, don't forget to like and share this article—it keeps us going!