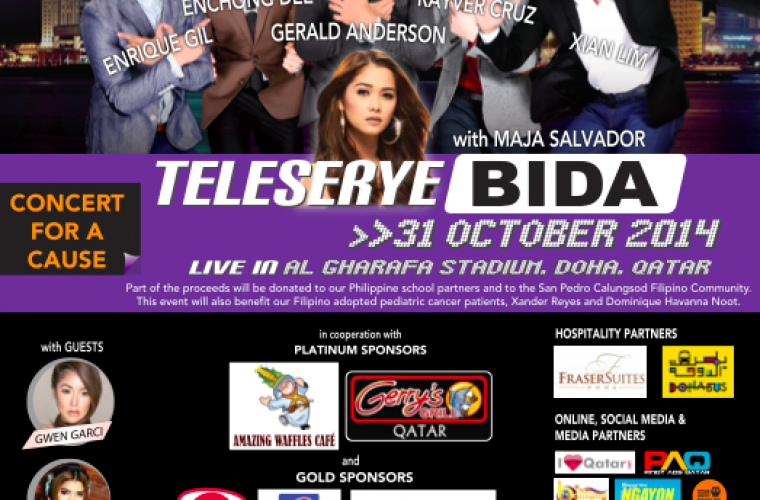 This concert will be a starry one indeed as L’Arc En Ciel Events proudly present Teleserye Bida on October 31, 2014 at the Al Gharafa Sports Club Stadium in Al Gharafa, Doha, Qatar. The organizer aims to assist its community partners and to raise a fund on the 2 Filipino pediatric cancer patients, namely Xander Reyes and Dominique Havanna Noot. The concert features five of the Philippines’ hottest male actors and screen idols—Enchong Dee, Gerald Anderson, Rayver Cruz, Xian Lim, and Enrique Gil— and with the special participation of The Legal Performer, Maja Salvador together with other guests, The Viva Hotbabes, Gwen Garci and Jennifer Lee and The Celebrity Bluff Comedian, Boobay. With these 9 big artists from the Philippines, this concert will sure become a hit! These five male artists are known collectively as Teleserye Bida, because they star in the top-rating Philippine Television Series or popularly known as telenovelas that are avidly followed by the Filipino community around the world through The Filipino Channel (TFC). All are managed by Star Magic, the home-based talent agency of ABS-CBN, the Philippines’ No. 1 TV network, whose shows are seen by Filipinos around the world through TFC. On the other hand, the Viva Hotbabes and Boobay who are working on freelance and from the neighboring network will also do the front act, sing, dance and a stand-up comedy show. The performance will entirely cover for 3 hours and there will be no opening acts performed by the local artists this time. So this is a full entertainment performed by the celebrities themselves. Madam Mariam Al Fadaaq, General Manager of the L’Arc En Ciel says, “I would like to give the Filipino community viewers a concert that is jam-packed with celebrities whom I am sure they will enjoy.” Meanwhile, RV Francis, a volunteer, and an active Filipino Community member and a lead promoter of the Filipino concert, is very supportive to the Teleserye Bida. He shares that the concert is mainly to support the Filipino communities in Qatar. He quotes, “when the producers of this concert and Madam Mariam Al Fadaaq, the event sponsor collaborated with me the purpose of putting up the concert, I did not think twice of supporting them. So I contacted all my connections with the artists from the Philippines and from there, we got the Teleserye Bida.” Francis’ desire is to have a valuable contribution in helping the community. Adding, “Especially if there is a greater purpose and an opportunity to help I would always want to participate voluntarily with these kind of initiatives. In this event, you will not only enjoy watching the show but at the same time you will be able to help too.” L’Arc En Ciel shares that they are encouraging the members of the communities to support the show like The San Pedro Calungsod Filipino Community (SPCFC) of the Our Lady of the Rosary Catholic Church, The Philippine School Doha and The Philippine International School. The organizer has also planned to donate part of the proceeds to the two Filipino adopted pediatric cancer patients, both 3 years of age, namely Xander Reyes and Dominique Havana Noot in cooperation with the Qatar Red Cresent Society. “We are really looking for sponsors to aid the transplant and medication, both for Xander and Dominique that’s we run many drives and campaigns especially to Xander. That’s why with all heart’s sincerity, my deep gratitude to the event organizer who have initiated this campaign and has considered the children as one of their beneficiaries,” said Rodrigo ‘Roii’ Edulan, Leader and Head of the SPCFC. The Philippine Embassy is also in full support of this concert. According to Ambassador Crescente Relacion, it is admiring for the producers to conduct an event with a greater cause and the desire not just to give an entertainment to Filipinos but the will and desire to help those who are in need. Meanwhile, The United Filipino Organization in Qatar Chairperson, Mr. Frank Jamandre conveys his whole support to the Teleserye Bida Concert. He said that the objectives of the event are clear and he will encourage the Filipino organizations under his umbrella to support this event. Al Fadaaq together with the producers thanking the sponsors, namely Vodafone, Amazing Waffles, Gerry’s Grill, LBC Express Qatar, Robinson Land Corporation, Colosseum Italian Delicatessen and its partners Fraser Suites Doha, Doha Bus, Virgin Tickets, Q-Tickets, Doha Sooq, EzyQatar, Jollibee, Popeyes, Doha Trendsetter, ILoveQatar, Pinoy Ads Qatar, Balitang Q, Pilipino Star Ngayon, Doha Nightlife, Capturing Emotions, Qatar Day, Pinoy Heart Radio. And also to the community partners, San Pedro Calungsod Filipino Community, United Filipino Organization in Qatar, Philippine International School and Philippine School Doha. This is a wonderful collaboration with sponsors and partners as they cooperatively participating with excitement in finding its best to assist in the concert the best possible way they can,” she stated. For tickets, contact L’Arc En Ciel Events at 44475350 or 66428221 or email [email protected]