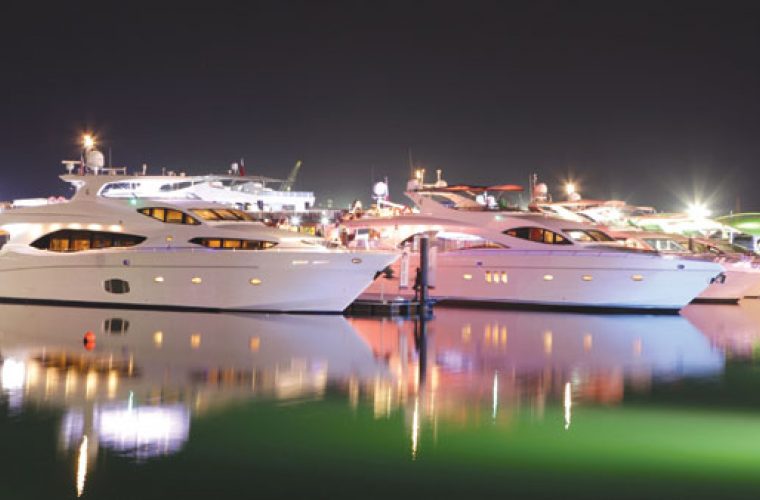 The 2015 Qatar International Boat Show (QIBS) will feature a range of attractions and activities that will appeal to all members of the family, the organisers have said.
The event, where exhibitors will show off their latest and best boats to potential buyers, will be held at Mourjan Marinas – Lusail City from November 10 to 14.
Proceedings on the special VIP opening day, November 10, will begin at 4pm with HE the Minister of Economy and Commerce Sheikh Ahmed bin Jassim bin Mohamed al-Thani inaugurating the show for the second year running.
From 6.30pm, the Qatar Coast Guard will stage a parade of boats. They will also have a boat sailing simulator on display in the main exhibitor area.
On the first day of QIBS 2015, there will be a parade of 10 boats by the Qatar Sailing and Marine Sports Federation. The federation will provide a number of activities and displays such as kids’ sailing and jet skiing.
For water sports enthusiasts, there will be a wakeboarding demonstration by Khalid al-Awadhi, a member of the Kuwait wakeboard team.
Also present at QIBS 2015 will be a contingent from Blue Marine, an organisation that offers activities such as jet skiing and flyboarding.
It will provide side activities such as canoeing, fly boarding, jet ski racing, kitesurfing, scuba diving, and wakeboarding.
Blue Pearl Watersport Tourism will also be present at the event.
It specialises in sea-, wind- and human-powered leisure water sports.
They are not just windsurfing, kitesurfing and kayaking aficionados, but are engaged in stand-up paddle boarding – known as SUP.
Something being shown for the first time in Doha is the Gais Speargun.
It is produced by a Qatar start-up company, which makes these guns for fishing and will highlight them at the Made in Qatar stand.
Returning to the show for the third year running is the Harley-Davidson parade. Last year saw over 50 Harleys at QIBS.
The organisers have stressed that QIBS will have a “family-friendly environment”. There will be a “Pirates and Mermaids” kids’ zone, which will boast of a play area, as well as activities such as drawing, painting, storytelling related to boating, the sea, sailing, as well as a dedicated F&B area.
A variety of meals will be available at tents managed by five-star hotels.
The cuisines on offer include Lebanese, Japanese and Italian. Visitors will also be treated to a salad bar and high-end Italian coffee.
The organisers have also lined up an exhibitors’ party where professionals can meet up or make new contacts with their peers.
Meanwhile, the Qatar Tourism Authority will rent a traditional dhow to host VIPs and clients.
The closing ceremony will be held at 9.30pm on November 14.