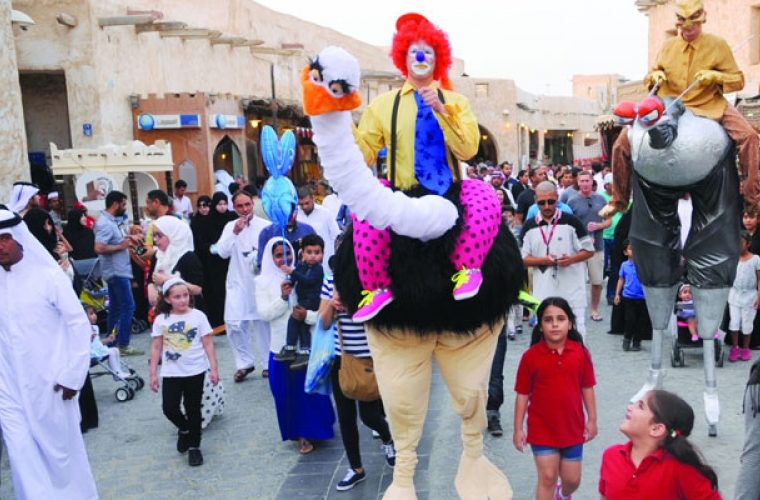 A gentleman in a tuxedo emerged from the rooftop of one of the posh hotels along the Souq Waqif alley, breaking the monotonous pace of passers-by along the street below. He waved to them before taking that first crucial step on the tightrope.
The crowd broke into cheers, signalling the opening of the 10-day Souq Waqif Celebrations 2015, as they watched in awe while the ropewalker slowly made his way from the building’s concrete balusters to the safety of an adjacent penthouse.
There was a brief lull after the ropewalker’s appearance, and people went about their business; families and other guests, whose al fresco dining was briefly interrupted, resumed their meals.
But the humdrum was again broken when a group of stilt walkers invaded the streets. This time a larger crowd gathered to meet them and was up-close and personal with the performers, who were dressed like harlequins. Aside from the stilt walkers, five other harlequins playing funky jazz tunes spiced up their performance.
A myriad of festivities await visitors until April 18 in select locations around the Souq Waqif, from 4pm to 9pm.
Throughout the event, board game aficionados could catch the Al Dama Championship from 4pm to 9pm at the Majilis Al Dama.
Aside from tight rope and stilt walkers, festivities along the Souq alley will be highlighted by other performances from Alfonso Rios, Colour Brigade, Light Walkers, Mirror Men, and the Toys Parade from 4pm to 9pm.
At the Al Ahmed Square, two events are expected to entertain and thrill both the young and the young at heart with song and dance performances and wrestling matches courtesy of WWE superstars.
Organised by Qatar Pro Wrestling (QPW), the “QPW Souq Waqif Storm” tournament will run until April 14, 6.30pm to 8.30pm. Yesterday’s tournament was highlighted by the appearance of wrestling legend, Booker T.
On April 14, a special wrestling match between Rey Mysterio and Alberto El Patron is expected to wow WWE fans. Tickets are available at Virgin Megastore or online via www.virginmegastore.qa, or at the wrestling arena (Al Ahmed Square).
The Souq Waqif Art Centre has also prepared fun-filled activities for budding artists during the “Plastic Arts & Art Workshops for Children,” which runs until April 17, 4pm to 9pm.
Today (April 11) marks the first Souq Waqif appearance of “those meddling kids” at the Al Rayan Theatre as Scooby-Doo, Shaggy Rogers, Fred Jones, Daphne Blake, and Velma Dinkley of the notorious “Mystery Incorporated” entertain fans with their awesome sleuthing skills.
The “Scooby-doo! The Mystery of the Pyramid” will run today, tomorrow and April 16, 3:30pm to 5:30pm for the first show, and 6:30pm to 8:30pm for the second show. From April 13 to 15, the show will run from 6:30pm to 8:30pm.
Tickets are available at Virgin Megastore or online through www.virginmegastore.qa, or at the Al Rayyan Theatre box office.