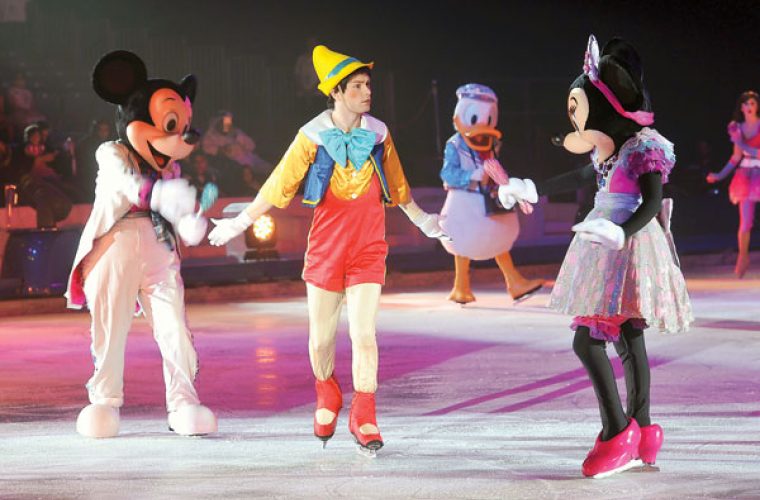 Disney On Ice Rockin Ever After opened last night at Qatar National Convention Center (QNCC). As children and parents took their seats, Mickey Mouse and Minnie Mouse skated out on to the ice to the roar of children standing and cheering, as the world-famous duo welcomed their Doha fans to the show.

Within minutes their pals Donald Duck and Goofy joined the couple on the ice, and so the enchanting night began as the fab four guided the enthusiastic audience on a journey through time. Pinocchio along with Cinderella’s step sisters warmed up the ice before Ariel, Rapunzel, Merida and Belle shared their ‘Happily Ever After’ stories.

The classic tale of Disney’s The Little Mermaid is always a fan-favourite but this performance left many in awe as ‘Under the Sea’ took the audience on a scenic journey with eye-catching costumes, dazzling skating and incredible lighting effects. Rapunzel, Flynn and Maximus from Disney’s Tangled provided much of the comedy for the night. As the show continued, spectators were swept away by the head-strong and free-spirited Scottish princess, Merida, from Disney•Pixar’s Brave. Wielding her bow and arrow, Merida tried to overcome her mother’s expectations and attempts to take control of her own destiny. And not far behind were her mischievous brothers, Harris, Hubert and Hamish, perched upon barrels. Before anyone could take a breath, Belle skated her way out on to the ice as we were taken on a trip down memory lane in one of Disney’s all-time classics, Beauty and The Beast.

Disney On Ice presents Rockin Ever After is Produced by Feld Entertainment, presented by the Qatar Tourism Authority and its Events Diary, OnQatar and organised by Sport & Entertainment Solutions in association with q.media Events. Qatar National Convention Center was transformed into a skating arena which it has taken a total of 420 man hours.