Countdown to 2022 begins as curtains draw on Qatar Fan Zone 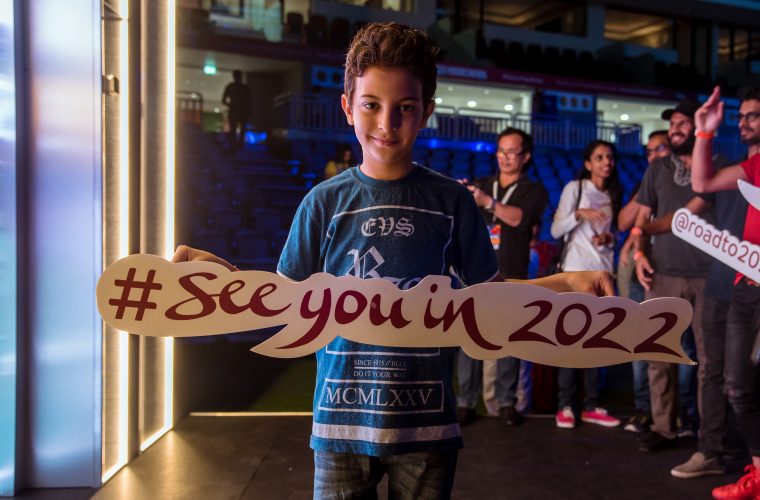 Following a month of intense football fever, Qatar Fan Zone (QFZ) has wrapped up the carnival-like activities at the Ali Bin Hamad Al Attiyah Arena. Since first opening its doors to the public for free on 14 June, more than 70,000 fans have been to the Fan Zone to enjoy a taste of what is to come in 2022 when Qatar hosts the FIFA World Cup™.

Thanks to its giant screens, visitors were able to enjoy live screenings of all 64 matches, including the simultaneous matches of the Groups Stages in a stadium-like atmosphere. In addition, QFZ’s visitors were treated to entertainment shows and live music performances by stars from across the Arab world. A special feature of QFZ was the "Qatar-Russia Portal" which utilized innovative live streaming technology to connect QFZ’s visitors to portals placed across football fan hotspots in Moscow and St. Petersburg.

Qatar Fan Zone was organised by the Supreme Committee for Delivery & Legacy (SC), the Ministry of Culture and Sports (MoCS) and Qatar Tourism Authority (QTA).

Nasser Al Khater, Assistant Secretary General, Tournament Affairs, at the SC said: “We’ve been delighted to give people here in Qatar a real taste of what’s to come when we host the 2022 FIFA World Cup™. The atmosphere at the Fan Zone has been incredible and has provided just a glimpse of what it will be like in just over four years’ time. The biggest sporting event in the world will soon be upon us and we can’t wait to bring Qatar’s communities, and the world, on our incredible journey along the road to 2022”.

Qatar Fan Zone has been a highlight of this year’s Qatar Summer Festival (QSF), which kicked off on the first day of Eid Al-Fitr. Organised by QTA, the 11-week festival is a nationwide celebration of the country’s diverse retail and hospitality offerings, complemented by a host of entertainment and sports activities.

Rashed AlQurese, Chief Marketing & Promotion Officer at QTA, commented, “We are very grateful for the unique input our partners at the Supreme Committee and Ministry of Culture and Sports have brought to this highly successful fan zone.” He added: "We look forward to continue working with our partners across multiple sectors to implement the Next Chapter of Qatar National Tourism Strategy 2018-2023 which identifies sports tourism as a priority sub-sector for strengthen Qatar's position as an attractive tourism destination."

Saud Aldolaimi, Director if PR and Communication at MoCS commented, “I would like to thank all of those involved in putting on such a magnificent event, and especially the teams at the SC and QTA. Qatar Fan Zone’s success is an example of what can be achieved with the collaborative efforts of the country’s different organisations. Events like these really bring to life the country’s passion for culture and sport and I’m looking forward to working with both bodies as we get ready to welcome the world in Qatar in 2022.”

Qatar Fan Zone was powered by Vodafone Qatar as the official telecommunications partner and supported by The W Doha Hotel & Residences, the official hospitality partner.

All images courtesy of QTA