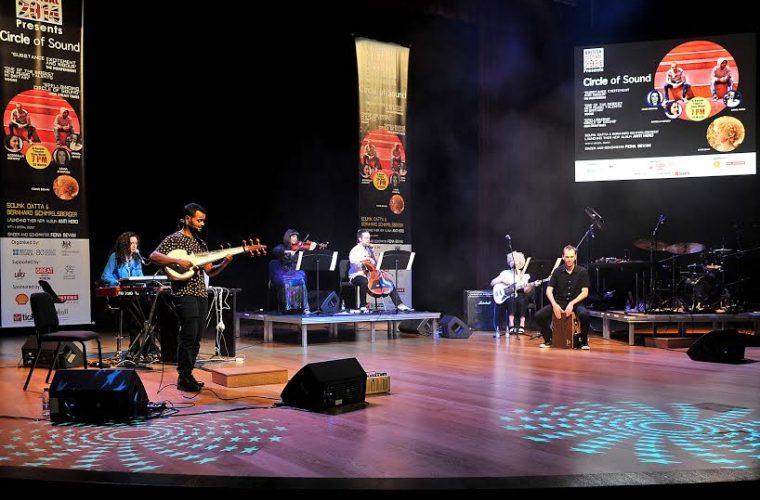 The acclaimed music duo Circle of Sound launched their second album, Anti Hero, last night at the Al Rayyan Theatre, Souq Waqif, as part of the British Festival 2014. The performance also marked the the first stop on their international tour of their new album “Anti Hero”.

The concert lasted just over an hour, during which time the duo introduced its audience to material from their new album. In contrast to their first album which consisted primarily of Sarod and percussions, for this second album Circle of Sound has introduced orchestral strings, live electronics and several special guests including singer-songwriter Fiona Bevan, Laura Stanford, Rosabella Gregory and Daniel Keane.

The evening’s performance was a finely balanced mix of Oriental timbres with strains of classical Indian ambience, while seamlessly bringing Western melodies into the mix. The performance was not a clash of musical cultures, but more a case of musical distillation. Circle of Sound was very well received by the Doha audience and the band received an almost 5 minute long standing ovation from a very grateful audience.

Circle of Sound is a powerful collaboration between composer Soumik Datta on the 19-stringed sarod, and drummer Bernhard Schimpelsberger. Hailed as the 'vanguard of British Asian music' (BBC), their sound resonates with deep Indian ragas, urban beats, glockenspiels and a spirited rock attitude.

Martin Hope, Director of British Council Qatar said: “We are thrilled that Circle of Sound accepted our invitation to come to Qatar. It’s a great honour for Qatar to be the first stop on the launch of a new album and international tour. The performance captivated the audience by bridging musical styles and language barriers and we are very honoured to have welcomed Circle of Sound in Doha.”

Soumik Datta, composer said: “What an amazing experience this has been! We have thoroughly enjoyed our stay in Doha and celebrating the British Festival 2014. The concert was exhilarating and we hope our audience liked it too. The British Council and the people of Qatar have been very kind and welcoming to us, and we hope our gratitude came across in our performance tonight. We are already looking forward to our next visit, in the hopefully not too distant future.”

The Circle of Sound performance was held at the Al Rayyan Theatre as part of the British Festival 2014, a celebratory collaboration between the British Council, the British Embassy Doha and UKTI.

For further information about Circle of Sound, please visit: http://www.britishcouncil.qa/en/events/british-festival-2014.