At least 10,000 are expected to visit boat show 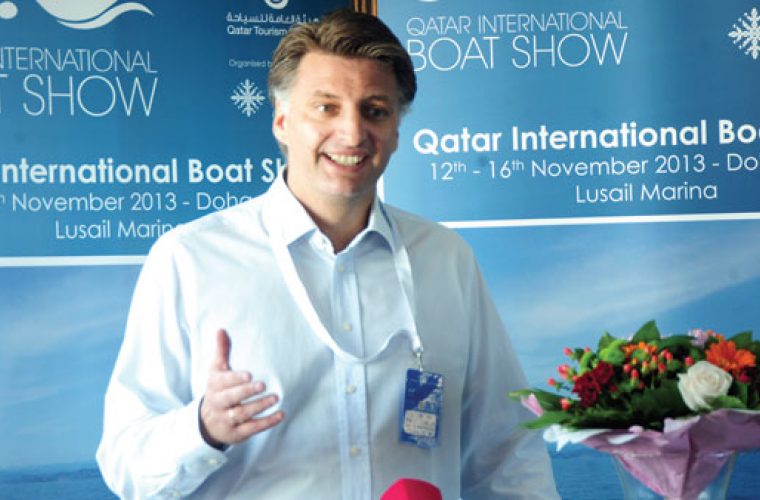 The Qatar International Boat Show (QIBS), the first event of its kind to be ever held in the country, is expected to provide an altogether never-before experience to those looking forward to watching high-end luxury yachts, many of which are currently berthed at the newly developed Lusail Marina. Informing this yesterday on the board of Magusta yacht, a nearly 50m long yacht, which arrived on a visit from Italy, organisers hoped the five-day event starting this afternoon would not only help the stake holders in the local marine enterprises exhibit their yachts and boats but would also contribute to attracting more of the world-class boats to the country in coming years. The organisers who exuded optimism about the future prospects of such shows in the country had no doubt that in a few years from now the QIBS would emerge as a show that every yacht enthusiast is looking forward to attending. While hoping that at least 10,000 visitors would throng the expo in the next four days of the event they said the reiterated commitment made by some of those arrived for participation made the hosts doubly confident about the show gaining attention from across the world. “The field has seven or eight major shows of this magnitude at the moment and there is every reason for the yacht buffs to feel that the Doha show would catch up with the rest of the exhibitions sooner than later,” said show director George Kapoulas. At this year’s event 64 exhibitors have their stalls, each of them overlooking the scenic Lusail Marina, besides attracting 35 yachts, mainly from different parts of Europe, in particular Italy, which has a rich and illustrious tradition in the industry. Many shipyards have their pavilions too, inquiries yielded. The organisers said almost 20% of the participants this year have already confirmed their participation in next year’s show, which they said would give a chance for those who could not participate now in the inaugural edition. Kapoulas said: “All visitors are welcome but they need to register at the visitors desk prior to their entry into the Marina”. At a round-table meeting of the maritime stakeholders from the country, scheduled for during the show, the participants will work out plans to form Qatar Marine Association. The organisers feel such an association would eventually promote awareness of the local market, create opportunities by identifying needs and attracting the right calibre of specialists and achieve international recognition for all that the country has to offer to the industry. Faysal Mikati, vice president of Snow Conceptual Communications, which is organising the show, said the international boating fraternity has come to Qatar to explore the potential of the market. http://www.gulf-times.com/qatar/178/details/371329/at-least-10%2c000-are-expected-to-visit-boat-show