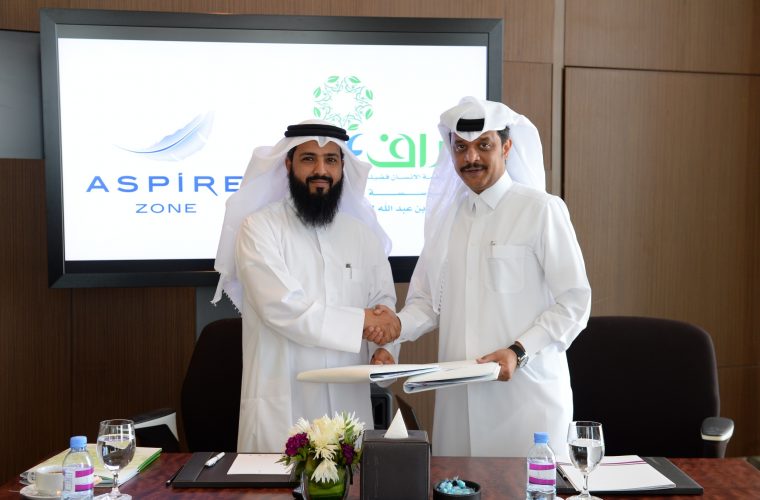 Yesterday, the Sheikh Thani Bin Abdullah Foundation for Humanitarian Services (RAF), announced that it is set to collaborate with Aspire Zone Foundation (AZF) for its upcoming third annual Ramadan Festival. As part of the collaboration, the organizations will be hosting a series of religious activities under the title, “Bashayer Al Rahma".

As Ramadan is considered to be the most sacred month of the Islamic calendar, Aspire Zone will be playing hosting a selection of activities designed for the whole family to enjoy, and which promote inclusivity and equality.

Khalid Abdullah Al-Sulaiteen, CEO of Aspire Zone Foundation, commented on the partnership: “During this year’s Holy Month, Aspire Zone Foundation is dedicated to sharing Ramadan’s religious rituals with the local community. Through our various programs, we aim to revitalize the traditional and authentic values encouraged by the Islamic religion, as well as promote activity and importance of healthy lifestyles.”

As part of the collaboration, RAF will be organizing daily Taraweeh prayers at the impressive Aspire Mosque. Located opposite the Torch-Doha Hotel, these will be followed by inspiring and educational religious lectures led by well-known Islamic preachers.

Dr. Ayed bin Dabssan Al-Qahtani, Chairman of the Board of Trustees, and General Director of RAF, said: "We are proud of the partnership with Aspire Zone Foundation, which, with its great potential and diverse programs and activities, represents an important milestone in Qatar. This collaboration is enabling us to organize a number of exciting events catering to the whole family. I would like to thank AZF for their efforts, in particular Khalid Abdullah Al-Sulaiteen, CEO of Aspire Zone Foundation,and his team.”

Dr. Al-Qahtani continued: "The festival will include 18 public lectures and host up to 23 guests from around the world. It will also feature 18 events in Aspire Zone, several miniature festivals in nearby areas, and activities at seven other major events in Qatar.”

He added: "Twelve Quran reciters will lead night prayers in Aspire Mosque. We will host three daily competitions throughout the month, and we are expecting a daily audience of 1500 people. In addition, we will distribute 2,000 specially-created Ramadan packs, 6,000 survey, 2,000 books, 10,000 Aspire booklet and brochures, 3,000 CDs, and 1,100 additional pieces of material."

In addition, as part of this year’s festival, AZF will be hosting an “Iftar Tariq” in areas that surround Aspire Zone. Daily, volunteers will distribute approximately 600 meals to people that are on nearby roads during Maghrib prayer.

Al-Sulaiteen added, “In collaboration with the RAF Foundation, we aim to observe Ramadan by holding religious seminars in the evening. We have invited a number of famous preachers to recite the Quran and lead the evening prayers in the Aspire Mosque. We will also be hosting an array of fun activities and contests for children. In addition, as part of our social responsibility program, we will be providing an Iftar meal to fasting Muslims who are still on the roads near Aspire Zone during sunset.”

Furthermore, there are six of committees involved in the Festival, including over 145 people from within Aspire Zone and RAF, and six additional supporting parties that are set to sponsor the event.

Dr. Al-Qahtani also stressed the importance of including Qataris in the festival. Over 60 male and 56 females will be volunteering, in addition to the Qatari preachers, scholars and reciters set to participate. The Civil Defense Agency will also be providing a vehicle that is equipped with lecture room that can accommodate up to 12 people for a 10 minute lecture. This vehicle will be present throughout the month in front of the headquarters of event.

The festival is not only designed to target individuals, but organizations, too. Specific days have been dedicated for Qatar Foundation for the Elderly people care “IHSAN”, the staff of Qatar International Islamic Bank, and a number of expatriate Islamic communities.

An organization that is dedicated to providing aid locally and internationally, RAF offers a number of initiatives that do not discriminate against people, gender, nationalities or culture. Its core values are inclusive of humanity, quality, neutrality and universality. The Foundation is known to regularly partners with organizations that share similar goals.