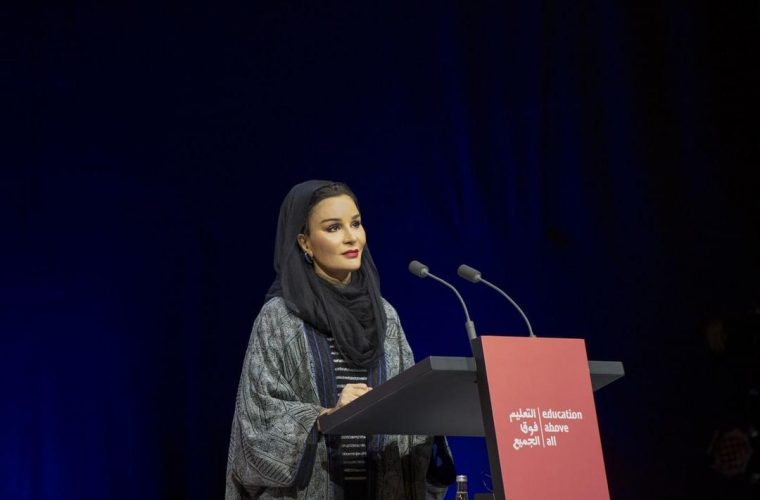 Her Highness Sheikha Moza bint Nasser, Chairperson of Qatar Foundation, yesterday attended the closing of the WISE Summit 2019, held under the theme of UnLearn ReLearn: What it means to be Human, held at Qatar at the Qatar National Convention Center and lasted two days.

Nearly 3,000 participants from more than 100 countries and 900 students from various schools in the State of Qatar participated in this year's edition, across the two-day conference.

Stavros N. Yiannouka, WISE Chief Executive Officer, reiterated the conference's commitment to delivering its mission of providing quality education for children wherever they are and the positive multi-level impact of the WISE Education Award and the WISE Awards, noting that the international edition of WISE will be held next year in Bogota, Colombia.

Stavros praised Education Above All Foundation (EAA) efforts to reduce the number of school dropouts, noting that WISE is committed to building partnerships and is continuing to collaborate with Qatar Foundation and Education City universities to build a special learning environment that will help through research and programs to develop educational policies that achieve the desired goals and guaranteed equal education for all by using available technology.

For his part, Larry Rosenstock, winner of the WISE Award for Education 2019 and the founding CEO of High Tech High School in the USA, expressed his gratitude to Her Highness Sheikha Moza bint Nasser, Chairperson of Qatar Foundation for her efforts in the field of education, especially in fragile areas and poor areas of conflict.

Mr. Larry highlighted his educational history, the quality of the schools he attended, the university where he graduated, his career, law practice and then the principal of a high school and finally, his idea was to create Hi Tech Hi, a public and independent school network in San Diego, California, in 2000.

He explained how the teachers designed the curriculum according to the students' desires and needs, and presented a project for students to explore nature around the school and their efforts to overcome a number of obstacles and barriers that they encountered in their educational journey.

High Tech High began as a modest independent school before becoming a full-fledged network of independent schools serving 5,780 students at all levels of pre-university education with varying levels and diverse socio-economic backgrounds, in four large educational complexes. In 2008, Rosenstock founded the High Tech High School of Education, which offers master's degrees and training to more than 5,000 teachers and tutors each year. Its programs are attended by teachers and policy makers from all US states, as well as peers from 30 other countries.

Jason Silva, a presenter at National Geographic, talked about human passion for innovation since the beginning of creation, and how this passion has turned into real innovations and technologies that facilitate his life and transcend science, mind and body and challenge his humanity.

He stressed that technology is changing reality by eliminating other industrial entities and births. Radical transformations in life, such as aircraft manufacturing and fire detection, have also taught us "the meaning of being a human being."

Jason stressed the need to keep pace with the rapid development of technology and thinking differently and harnessing the talents and ideas of young people to educate humanity and to learn how to go beyond the limits of our brains to reach beyond what we have drawn for ourselves.

At the end of the conference, the speakers stressed that the world needs more conferences, such as the WISE, as it provides a lesson for all that creativity is everywhere, especially that the winners of the WISE Prize for Education from different regions and communities in the world are proof that innovation has no limits.

They explained how art brings people together and contributes to the understanding of science and mathematics, noting that the development of artistic talent requires fewer numbers in the classroom and qualify teachers to stimulate the abilities of creativity and innovation among young people.