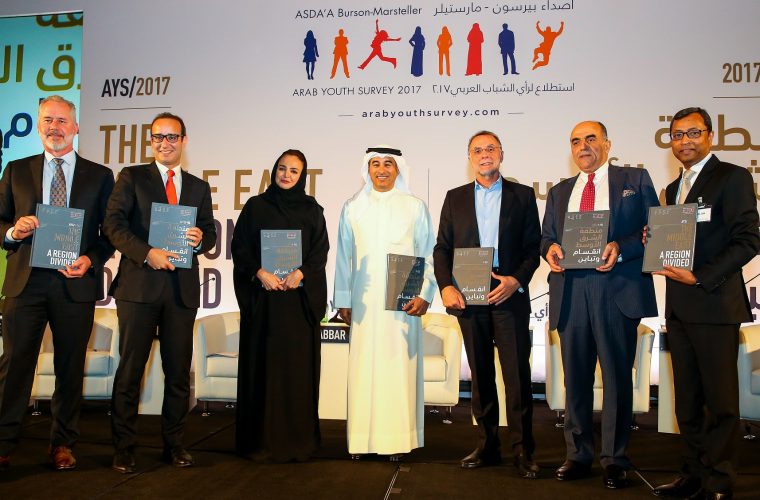 Qatar youth in the GCC are overwhelmingly positive about their futures and believe their governments are putting the right policies in place to address their needs, according to findings from the 9th annual ASDA’A Burson-Marsteller Arab Youth Survey 2017, released today. An overwhelming majority (96 per cent) of Qatari youth said that they believe the country has been heading in the right direction over the past five years, while 86 per cent were confident the government is developing the right policies focused on the youth.

H.E. Sheikha Hanadi Al Thani, the Founder and Chairperson of Amwal, participated in the panel discussion at the 9th Arab Youth Survey launch event, focusing her remarks on education and unemployment.

In the GCC states, 85 per cent of young people are confident that their country has been heading in the right direction over the past five years compared with 52 per cent for Arab youth across the region. Three quarters (78 per cent) of GCC youth also believe their “best days are ahead of them” compared with 58 per cent for Arab youth as a whole; and 82 per cent of young people in the GCC believe their economy is on the right track versus just 52 per cent on a region-wide basis.

Further, 86 per cent of Gulf youth believe their governments are putting the right policies in place that will benefit young people ­ – an opinion held by just 57 per cent of young Arabs across the whole Middle East.

Sunil John, Founder & CEO of ASDA’A Burson-Marsteller, said: “For the GCC states, the findings from this year’s Survey are encouraging. Not only are young people optimistic about the future, they have confidence that their governments are doing the right things for them. This is not the story in the rest of the region. The positivity and optimism of Gulf youth are a real bright spot in the Middle East today, but one that also highlights a growing trend of a polarisation of views, inspiring the main theme of this year’s Survey: ‘The Middle East – a region divided.’”

Roy Haddad, Director, WPP MENA, said: “The Arab Youth Survey provides a voice to the voiceless, and allows young Arabs to be heard around the world. It allows us to hear what Arab youth think and feel about their past, present and future. As such, it is an invaluable tool for businesses and governments, and civil society in general, who need accurate data and insights about this most important demographic.”

The threat posed by Daesh – viewed last year as the number one issue facing the Middle East – is seen as diminishing, this year tying with unemployment as a top concern for 35 per cent of the region’s young people. Most young Arabs (61 per cent) also believe the terror group is getting weaker and, across the region, young people think education reform and well-paying jobs are just as important as military action in defeating terror and extremism.

Other key findings from the ASDA’A Burson-Marsteller Arab Youth Survey 2017:

The quality of education is a cause of concern for young Arabs, particularly in non-GCC nations. Nearly half the Arab youth say they are not satisfied with the current level of preparation of students for jobs of the future. Of the 51 per cent who say they are satisfied the current education system is preparing them for future roles, most are from the GCC nations (80 per cent) while those least satisfied hail from North Africa (33 per cent) and the Levant and Yemen (34 per cent).

The United Arab Emirates cemented its position as the country most young Arabs would like to live in and would most like their own countries to take after. This year, one in three (35 per cent) young Arabs say they would most like to live in the UAE, a significant increase of 13 percentage points from last year. Asked which country they would like their own country to emulate, the UAE again comes on top, with more than a third of young Arabs (36 per cent) saying the UAE is their model country, compared with one in four last year.

Young Arabs say Donald Trump is anti-Muslim and express concern, anger, and fear about his presidency

Attitudes towards the election and presidency of Donald Trump are largely negative, with two thirds of young Arabs (64 per cent) either concerned, scared or angry about Trump taking the helm of the world’s most powerful country. Furthermore, 70 per cent of young Arabs say Trump is anti-Muslim and half (49 per cent) agree that Trump’s travel ban imposed on Muslim-majority countries would make it easier for extremist groups to radicalize and recruit young Muslims.

Despite their pride in the Arabic language, most young Arabs say they are using English more than Arabic in their daily lives

Among young Arabs, Facebook is the number one medium for daily news

More than a third (35 per cent) of young people in the Arab world say they get their news on Facebook daily, compared with 31 per cent for other online news sources, 30 per cent for TV news channels, and just 9 per cent read newspapers daily. Two-thirds (64 per cent) say they use Facebook to share news stories, up from 52 per cent in 2016 and 41 per cent in 2015.