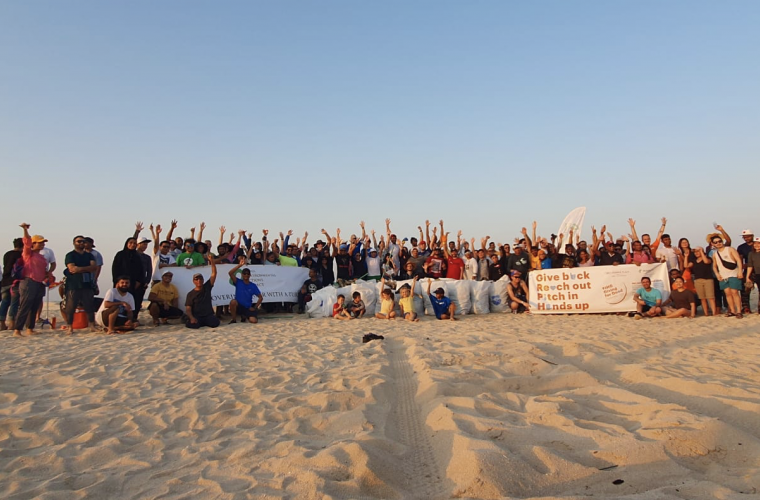 September 21st is the World Cleanup Day. Volunteers and partners worldwide come together to free the planet from trash by cleaning up litter from our beaches, rivers, forests, and streets.

The movement started in 2009 in Estonia, when almost 5% of the entire population made a decision to clean the entire country from illegally dumped waste, in a matter of hours. The aim behind this initiative was to protect the environment from the pollution as well as to create awareness in the society about this crucial issue. However, this valent effort of the people drew praises worldwide, which became an inspiration to many to follow suit with the same ambitious ‘one country, one-day’ formula. This was the beginning of a global bottom-up civic movement that has spread like wildfire around the globe.

Last year, 17 million people in 158 countries took part in World Cleanup Day, which was the biggest civic action in human history, where 88,500 tons of waste was collected.

What is Qatar doing?

The Qatari government, various organisations, civic groups, and concerned individuals are putting their efforts to keep the environment clean. Ministry of Environment and Uban Planning (Al Baladiya) continuously spreads awareness through their social media to educate everyone to be responsible to take care of our surroundings.

Various companies and individuals who visited the Sealine Beach during this year's Eid Al Fitr holiday were fined after they left the shorelines with large quantities of waste and garbage. Photos circulated on social media showed wastes scattered even though there are more than 75 garbage containers in the location. To make sure that the laws are properly followed in maintaining hygiene accross Qatar, the Ministry of Municipality and Environment increased the fine up to QR 25,000.

2. "No To Plastic" Campaigns

Plastic is one of the most toxic items to the Earth. To reduce the usage of plastic bags, community groups and private sectors are encouraging eco bags as an alternative. In line with this, recently Carrefour and the Ministry of Municipality and Environment launched a new campaign - “No Plastic Tuesdays”. Every third Tuesdays of each month, Carrefour eliminates single-use plastic bags from cash counters and offers free eco-bags. Moreover, single-use plastic bags for fruits and vegetables will be soon replaced with paper bags. Carrefour also rewards with extra My Club points to the members who do not use plastic bags.

To ensure the greatest possible standards of hygiene in the public area, Public Hygiene Law was first introduced in Qatar in 2017 which came into full effect in February 2018.

Furthermore, to create awareness among the general public about the law, the Ministry of Municipality and Environment (MME) adopted a number of initiatives, for example, placing billboards and posters at different strategic locations as well as using media (television, radio, print media, internet) in spreading information. A video campaign was also created to educate everyone including those in labour camps. The MME has also recommended the general public to become more involved in raising increased awareness of the Public Hygiene Law.

Many volunteers walk the shorelines of Qatar every weekend to dig into bushes, beyond fences, and long kilometres of sand with gloves cleaning up coastal areas. They assemble in the beaches hunting for bits of plastic and other garbage as part of a massive beach cleanup effort. Aside from cleaning the seashores, some of them reach as far as the depths of the sea to remove garbage and plastic wastes.

The Doha Environmental Actions Project (DEAP), is an environmental group that has been active in Qatar for more than two years now. It was founded in May 2017 by Canadian national Jeanne Brown with a sole purpose in mind of restoring the beauty of the sand dunes and beaches in Qatar. To date, DEAP has already completed over a hundred organised events, taken more than 5,300 Volunteers on cleanups, and has collected over 65,000 Kilos of trash from the beaches and sand dunes of Qatar.

Their last beach cleanup was held at the Al Mafjar beach in Northern Qatar on the 20th of September 2019 in cooperation with the Division of Cultural Heritage at Qatar Museums, and the Torba Farmers Market in celebration of the World Cleanup Day 2019. You can visit our Instagram @ilqlive to see the highlights!

Furthermore, DEAP is focusing on to have a national beach clean-up day in Qatar, a day where we all cherish the environment and celebrate Qatari culture and its breathtaking natural landscapes.

Now on their second straight year, the Dive Against Debris Doha movement was formed to help ensure that the waters under the beaches of Qatar are safe and clean especially for the animals living there. They are a group of professionals and regular divers whose main concern is to preserve the ecosystem underwaters by conducting yearly dives. This month on the day itself of the celebration of the World Clean Day 2019, they are scheduled to dive the waters of Sealine beach to conduct underwater beach clean up. Non-divers are also encouraged to help clean the above surface of the beach. In this way, the group hopes to contribute to the global vision of saving the environment.

5. What ILQ is doing

I Love Qatar's (ILQ) contribution goes back to 2014. We partnered up with Arabian Adventures Qatar and organised Mangrove Cleanup along with 550 volunteers. Qatar National Tourism Council, Hamad Medical Corporation, Jaidah Automotive, Coreo and many other sponsors supported this campaign to help the environment.

As your friendliest community, we continuously support and promote environmental advocacies and awareness campaigns through different types of content such as harmful effects of plastics, guides to recycling and many more. Also, we encourage community members to participate in cleanup activities.

Moreover, a green leaf was added in the logo to symbolise the dedication of the team to help in spreading awareness and knowledge to the public on environment-friendly.

6. What needs to be done

Take your snacks or food in reusable containers rather than using disposable ones. Let's think about sustainability!

2. Do not litter anywhere

Be responsible enough to know where to properly dispose of your waste. Find the nearest trash bin, if not possible, bring the waste back home and dispose of.

It's the best thing to monitor and educate each other! If you see someone leaving their mess behind, speak up!

It is a very common practice to clean up as you go! There are no different groups of people who make a mess and who clean. Let's please take care of our environment! We can only make changes ourselves.

Are you willing to volunteer for a noble cause of saving the beaches from plastic wastes? Will you go far saving mangroves? There are so many ways to help preserve the environment, all you have to do is to stay active in your community and start it within yourself. If you like this article, don't forget to give it a like and a share—it keeps us going!