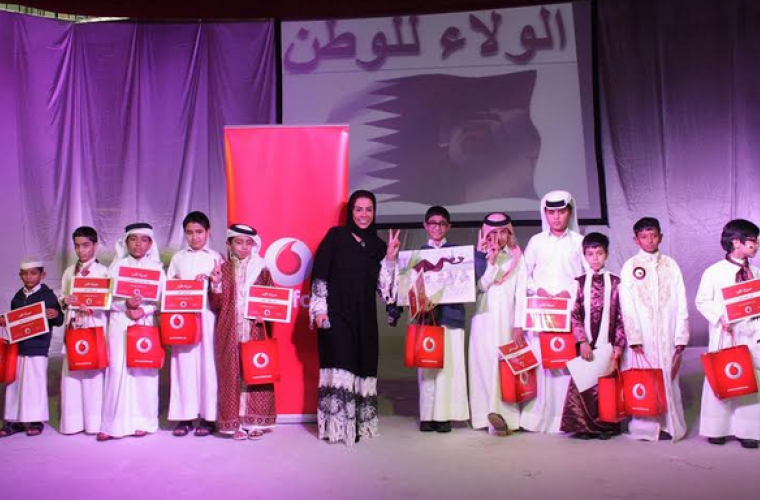 Walking with great prizes and certificates, some of the winning students were: Dana Saeed Hussein and Hessa Ahmed Mohammed Al-Kuwari of Amna Bint Wahab; Bushra Haroon Al-Rasheed of Umm Salama; Mohammed Abdullah Al Khuleifi of Al Khaleej Al Arabi; Noorhan Rabie of the Royal International School; and Anna Suhain Al-Thani of Lycee Voltaire. Wafa Saleh, Manager of Al Johara at Vodafone Qatar, said: “Our competition, “Proud and Qatari”, brought students and their families together and encouraged them to unlock their creative flair and talent to produce representations that depict what Qatar and this highly-awaited occasion truly means to them.

We’re very privileged and happy to have had the opportunity to work closely with the schools’ teams and students to bring this meaningful event closer to their hearts. Our engagement with and support to educational entities in Qatar is one of our top priorities in Vodafone Qatar especially when one of Al Johara team members, Fatima Al-Kuwari, is sitting on the board of Regents of Umm Salama School.

” Al Johara is a unique initiative for Qatari women to sell Vodafone products and services to friends, families and communities. Qatari women learn new skills, work at home, earn income and develop their entrepreneurial talent, within traditional and cultural communities. Al Johara programme’s scalable nature is helping to create employment opportunities and empowering Qatari women. The team includes ladies aged between 23 to 46 half of whom are mothers and students. Saleh added: “Al Johara is not just a commercial move; it is deeply entwined with the fabrics of Qatar’s culture and community. It has created a community where women can access and share technology.

The pilot project began in 2010 with women who had never worked before. Becoming involved has been a significant step for them, and they all say that they have gained in independence and prosperity, as well as socially and educationally.”