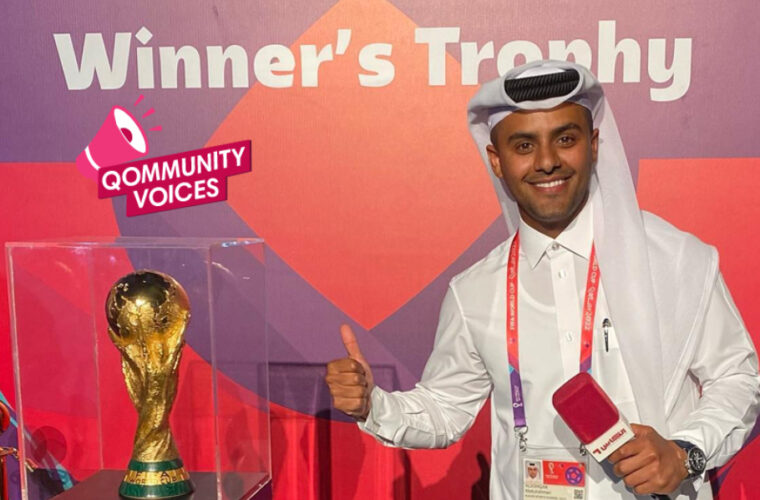 The World Cup in Qatar has brought together people from all over the world for one global tournament. Over the past few weeks, football fans from different cultures have taken over Qatar with festivities, costumes, and celebrations.

The local media has played a significant role in showcasing the colourful vibes of the World Cup. One viral sensation is Al Kass Sports reporter Abdulrahman Alashqar who rose to instant fame with his funny and exciting encounters while interviewing football fans during the tournament.

The ILoveQatar.net (ILQ) team brings you an exclusive interview with Abdulrahman Alashqar to get an insider’s look at his career, his time spent covering the World Cup, and his most interesting encounters.

His career as a reporter

Abdulrahman Alashqar is a full-time computer engineer passionate about media, especially TV. He loves connecting with people and audiences, which led him to venture into the TV field as a reporter outside his profession.

When asked what he loves about being a reporter, he shares, “I love to do my job because I’m representing Qatar. I represent Qatar by the clothes, by the character, by the name, by the nationality. I love to show that the people who work and live here, Qatari or non-Qatari, are the face of Qatar.”

Abdulrahman Alashqar has become a social media sensation after his World Cup interviews with football fans went viral. One of his most memorable encounters is when he was interviewing Brazilian fans after their team won with a 2-0 score, and he was carried up by them in celebration.

He shares that this interaction from the Brazilian fans during his interview wasn’t expected at all, and he did not expect that the audiences will love the encounter, especially on the social media apps like TikTok, where clips of his interviews have reached as much as 800k views and have gained him thousands of followers.

When asked what’s the most interesting interview encounter he’s had, he recalls an interview with England and Wales fans after their group stage match.

“There was an interview I did with Wales and England fans; despite their countries’ disputes, I was able to get them to sing together, smile together, celebrate together.”

Abdulrahman has gone on to conduct many fan interviews showcasing the vibrant cultures and has celebrated how football has brought these people together.

“Football is for everyone. It's for Indians, Brazilians, Lebanese, Filipinos, Thai, Americans, Africans, everyone!”

How he takes on interviews with fans

Abdulrahman says that the key to creating great interviews is to do it by heart and make sure that the person being interviewed is enjoying it by making them smile with his questions and character.

“I treat people who I interview like my brothers and sisters. I do my best to take them to the next level and show that they are amazing.”

He shares that he prioritizes the interviewees, how they look, and ensuring they are comfortable. He also shares that being able to communicate well is a big part of the job, especially dealing with people who speak different languages, noting that if you speak their language, you will be respected and will be able to connect with them more personally.

Being part of the media covering the World Cup in Qatar, Abdulrahman expresses the importance of their role in showcasing Qatar to the world to dispute the negative news about the country. He helps create a platform where he puts the spotlight on the visitors, locals, and residents of Qatar as they share their experiences in the country.

“Qatar shows everyone that this is the right time to get to know and respect our faith, ideas, character, culture, and country.”

He expresses his admiration for Qatar’s hosting of the World Cup in showcasing another side of the world in this global tournament. The World Cup is hosted in the Middle East for the first time, creating a fantastic opportunity to celebrate different cultures.

A message from Abdulrahman Alashqar

“I wish to be the person that can show other people that nothing is impossible. Everyone has problems and unfortunate situations, but trust me, you can be something and can impact other people and communities. Have faith in your dreams.”

He didn’t expect that his dream to be a reporter or presenter would allow him to reach this many people. He is glad he stuck with his passion and says he will continue to do his best and represent the people of Qatar.

Where to find Abdulrahman Alashqar

Have you seen any of Abdulrahman Alashqar's World Cup interviews? Which one is your favourite interview encounter of his? Let us know in the comments! Do share this article - it keeps us going!