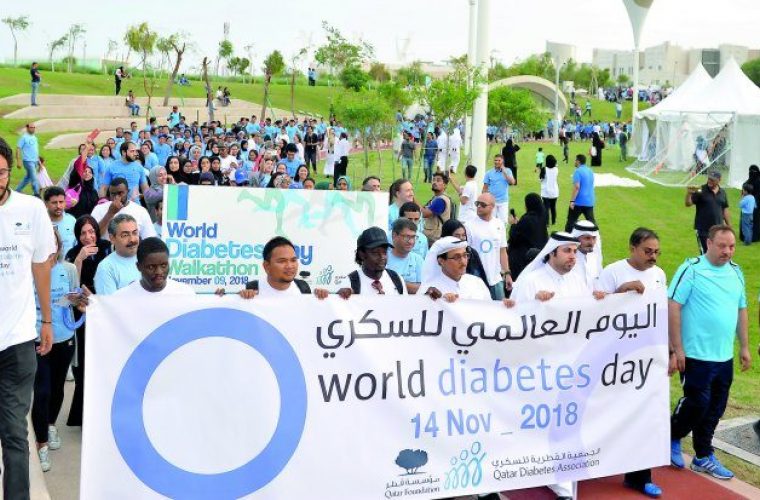 Around 7,000 people came together to raise awareness about diabetes during the 9th annual walkathon organised by the Qatar Diabetes Association, a member of Qatar Foundation, yesterday (November 9, 2018).

Oxygen Park at Education City witnessed a sea of blue wave as community members gathered to show their support to fight against diabetes. They all dressed in blue T-shirts and caps.

The walkathon was held in conjunction with the International Diabetes Federation’s campaign to raise awareness about the risks of type 2 diabetes and its increasing prevalence in the world among all age groups, especially among the youth. The annual World Diabetes Day is marked on November 14 and theme for this year is ‘Family and Diabetes’.

“During November, people from all over the world take part in Diabetes Walks to mark the World Diabetes Day. We organise our walkathon annually to raise diabetes awareness and to recogniae the people live with diabetes in Qatar and worldwide. We also want to focus and promote the role of the family in diabetes management and care of their children living with type 1 diabetes and their role in preventing type 2 diabetes, as diabetes concerns every family,” said Dr Abdulla Al Hamaq, Executive Director of Qatar Diabetes Association.

According to the first survey carried by the Ministry of Public Health, the prevalence of diabetes in Qatar is 16.7 percent. The second survey is expected to be held in 2019.

“Commonly type 2 diabetes is prevalent among people above the age of 40 years. But now we see many young adults are suffering from type 2 diabetes due to lifestyle habits. This is very alarming. So awareness and education is more important,” said Dr Al Hamaq.

Participants at the walkathon represented schools and private and public organizations, healthcare facilities and several others. Health education booths, free screening for diabetes and many activities like zumba and yoga demonstrations also featured on the sidelines of the walkathon.

As part of continuing activities to mark the World Diabetes Day, The Torch Doha will be lit in blue on November 14 night. Also the Basel Camp for children with type 1 diabetes and a conference under the theme ‘Family and Diabetes’, will be held in December.

Were you one with the marathoners who participated in the Diabetes Walk yesterday? If yes, drop us a line in the comments and also, don't forget to like and share this article—it keeps us going!