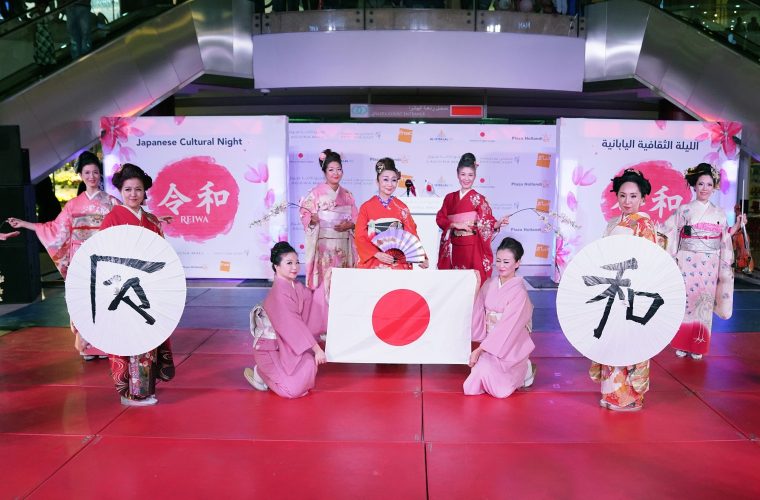 The Japanese Embassy in Qatar, in collaboration with Lagoona Mall, Doha’s premium shopping and lifestyle destination, has celebrated the beginning of “Reiwa”, the current era of Japan which began on the 1st of May 2019 when His Majesty Emperor Naruhito was enthroned as the 126th Emperor of Japan, in an enchanting cultural night. “Reiwa”, which is interpreted as “Beautiful Harmony”, signifies a “culture born and nurtured as people’s hearts are beautifully drawn together”.

The event was held on the 11th of October at the north court lobby of Lagoona Mall and was attended by H.E. Mr. Kazuo Sunaga, the Ambassador of Japan to the State of Qatar, Mr. Mohammed Said Al Baloushi, representing the Minister of Culture and Sports, Mr. Bader Al-Darwish, Chairman and Managing Director of Darwish Holding, foreign dignitaries, guests and media representatives. The celebration aimed to bring better understanding of the Japanese culture and traditions and engage with the local community.

During the event, members of the Doha Kimono Club presented an exquisite selection of kimonos, a traditional Japanese garment, and wowed the audience with a colorful show while showcasing how each individual thread is woven together to create these extraordinarily elegant pieces. Following the show, Ms. Kumika Sugiyama, a Japanese Ikebana artist, amazed the audience with an artful presentation of flower arrangements that included unexpected and symbolic designs. In addition, Master (Sensei) Ryo Arai alongside the Doha Kendo Club stunned guests with an electrifying performance of Kendo, a traditional Japanese martial art descending from swordsmanship. Guests also had the opportunity to have their names beautifully crafted in Japanese calligraphy by Ms. Wakako Kimura and Ms. Yayoi Kodama.

Mr. Bader Al-Darwish, Chairman and Managing Director of Darwish Holding said: “We are very pleased to be part of this exceptional cultural event as our relationship with Japan extends to many decades where we have been partners with some of the most coveted Japanese brands like Yamaha, Ricoh and Sony, with the latter being represented by us since the early fifties. Ever since, we have shown ongoing success, outstanding performance and exceptional growth. Also, we would like to highlight the confidence of the Qatari market in Japanese brands as we are very delighted with the remarkable local presence that they have established with time. Today, we truly believe in our mutual role of promoting and supporting any socio-cultural and educational initiative which will impart a stronger stimulus to the Japan-Qatar bilateral relationship.”

In his opening remarks, H.E. Mr. Kazuo Sunaga, Ambassador of Japan to the State of Qatar touched upon the importance of Culture in forging bridges of understanding between the people creating a stimulating space for interaction and rapprochement, expressing his pleasure to sponsor the first cultural event in the Reiwa era in Qatar, and hoping it will bring the people of the two friendly countries closer and promote further understanding of the Japanese culture between the good people of Qatar.

Alongside Lagoona Mall, this event was also sponsored by Fifty One East, FNAC, Al Isteklal TC-IAC Qatar and Plaza Hollandi in an effort to demonstrate the strong ties between Qatar and Japan and reflect their support to cultural exchange initiatives.