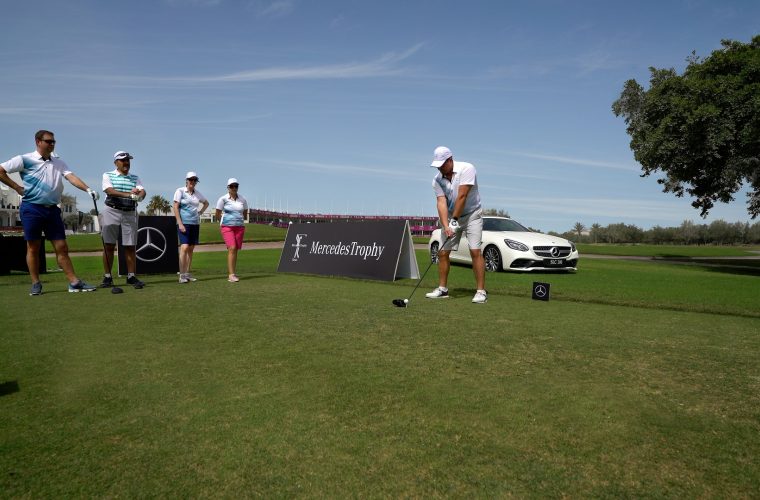 The third edition of the Mercedes Trophy Golf Tournament gathered 88 players in three main categories: Men A (0-12 handicap), Men B (13-24 handicap) and Women.

HE Sheik Faleh Bin Nawaf Al Thani, Operations Director – Auto, NBK Holding said: “following the success of the past two editions, Nasser Bin Khaled Automobiles is pleased to host the third Mercedes Trophy Golf Tournament in Qatar. It is through such tournaments we reiterate our commitment to promote sports and social engagement with our valued customers and golf enthusiasts in Qatar”.

“We thank all players for their participation and would also like to thank our partners and sponsors, Blue Salon and Total for all their support to make this tournament a success. We would also congratulate the winners of the third edition of the cup that it became a key event in Qatar’s social and sports calendar”, He added.

The sessions witnessed healthy competition where Johan Anton Hazejager won the first place in Men’s Category A scoring 37 points, while Simon Davis and Benjamin Coleman got the second and third places respectively. In Men’s Category B, Jean Paul Arcidiacono scored 39 points to reserve the first place followed by Mike Khoo in the second place and Arnav Dutta in the third. In the women’s category, Nada Mir scored 38 points and won the trophy, while Nguyen Thi Chau ANH was the first runner up and Julia Deeley was the second Runner up. Besides, four players received special prizes for their exceptional performance, including Simon Davis for the longest drive, David Wallace for longest putt holed, while Nguyen Thi Chau ANH for the nearest to the rope, and Jean Paul Arcidiacono for the nearest to the pin. All participants got valuable gifts from NBK Automobiles and event while the winners received their trophies and prizes during the gala awards ceremony.

The tournament reflects NBK Automobiles and Mercedes-Benz’s appreciation to patrons of the luxury brand, and is designed to create an interactive community sports event that brings people together to celebrate the values and ethos of the brand known for excellence, luxury and quality. This year, Blue Salon and Total are the sponsors of the third Mercedes Trophy Golf Tournament.

The third Mercedes Trophy Golf Tournament also gathered media from Qatar who attended a full day of joy and excitement. Starting with the open-air breakfast with NBK Automobiles team among Mercedes-Benz cars, the reporters who represent dailies, magazines and online portals, along with social media influencers enjoyed a full and comprehensive golf training session under the supervision of professional trainers.

2018 marks the 28th Anniversary of the prestigious Mercedes Trophy Golf Tournament globally. It is an exclusive series of invitational golf tournaments conducted over the world for Mercedes-Benz Owners. Each year, over 60,000 players from more than 60 countries tee off at the Mercedes Trophy in local, regional and national events, competing to qualify for the Mercedes Trophy World Final at the ‘home of the automobile’, Stuttgart, Germany. This venue underlines the close relations between the brand Mercedes-Benz and golf, and reflects the values of luxury and elegance that they represent.