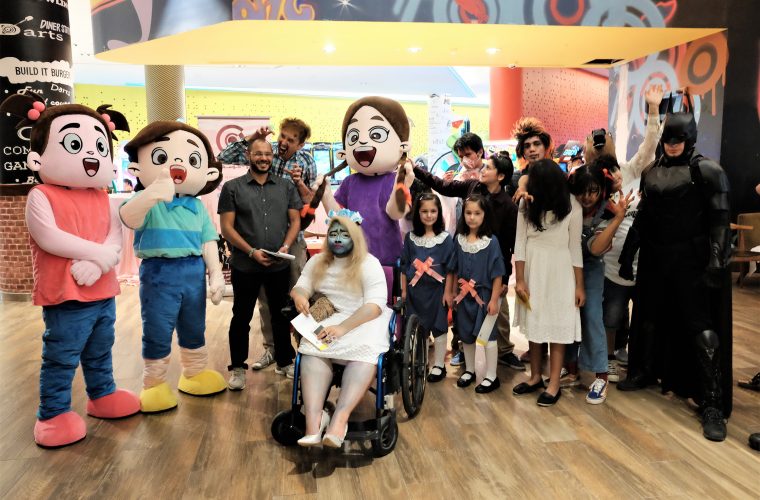 The recently-concluded horror-themed cosplay at Megapolis Entertainment Center Qatar was a huge hit not only among kids and geeks but also with the whole family! With the aim of bringing together Doha geeks, movie fans, gamers, and make-up artists under one roof, Qatar's premiere cosplay organization Q Cosplay organized and spearheaded the event on the second and last Friday the 13th of 2018—thus the horror concept.

The ILQ team was present on the 'bloody' parade of monsters and zombies last Friday night and here are TEN of the spookiest—and at the same time most adorable—costumes that got our heads turning!

Note: There's an 11th and bonus cosplayer so make sure to scroll until the very bottom. We promise you, it's worth it!

The iconic 'Jigsaw Killer' was among the crowd favorites during the fun event last weekend and the cosplayer who donned the fictional movie villain's costume is non other than a five-year-old kid! Jigsaw is famous worldwide as the 'Saw' series' main antagonist who forces random people to deal with his deadly scenarios, which he referred to as "games" or "tests." The name Jigsaw was given to him by the media for his practice of cutting a puzzle piece shape of flesh from those who fail.

So, should we say it? "Live or die. Make your choice."

2. The Corpse Bride from the movie of the same name

The 2005 film, directed by Tim Burton, is a stop-motion animated musical film which also incorporates a hybrid of supernatural elements including fantasy and thriller. The story revolves around Victor—played by actor Johnny Depp—and Victoria who are forced to marry each other by their own families. While Victor is in a forest practicing his lines for the wedding, a tree branch becomes a hand that drags him to the land of the dead. Nawaal Akram, who was among BBC's '100 Most Influential and Inspirational Women of 2017,' graced the event wearing Emily's white dress.

Who can forget the long-haired Japanese creep who crawls out of the television set to seek revenge from those people who murdered her? Well, we bet every ILQer had a glimpse of her at least once and horror fans were lucky to have Sadako in the line-up of horror cosplayers last weekend! As a ghost, she uses nensha, her most distinctive power and weapon, to create a cursed video tape that will kill whoever watches it exactly one week later unless the tape is copied and shown to another person, who then must repeat the same process. But in Megapolis, Sadako is more than glad to pose for selfies and kids loved her!

If you haven't heard of a 2012 horror film called Smiley, here's its IMDB logline: 'A mentally fragile college student believes that she will be the next victim of a serial killer who can be summoned through the Internet.' The killer in mask, Smiley, is a subject of an internet myth. In the movie, if a person on a Chatroulette-style website types the phrase "I did it for the lulz" three times, their chat partner will be murdered by Smiley, so named because he mutilated his own face by stitching his own eyes shut and carved his mouth into a smile, before they themselves are killed.

The question is: Will you be 'happy' to approach Smiley once you see him walking around Doha?

5. Chucky the killer doll from the 'Child's Play' series

Before the many sequels and spin-offs, Charles Lee Ray (more popularly known as 'Chucky'), was first seen in the 1988 film 'Child's Play.' The possessed doll is played by a former ILQ volunteer and Chucky will be proud to see a lady portray him like a pro from the make-up, hair, costume, antics, and those creepy face stitches! Who would've thought that a killer doll would be this adorable?

Jason Voorhees, more popularly known as the psycho from the 'Friday the 13th' movie series, was also in attendance—but without Freddy Kruger—at Megapolis last weekend. In the movie, Jason was not originally intended to carry the series as the main antagonist. The character has subsequently been represented in various other media, including novels, video games, comic books, and a crossover film together with the above mentioned character from another classic film—the 'Nightmare on Elm Street.'

The Tikbalang is a creature of Philippine folklore said to lurk in the mountains and forests of the Philippines. It is a tall, bony humanoid creature with the head and hooves of a horse and disproportionately long limbs, to the point that its knees reach above its head when it squats down. In some versions it is a transformation of an aborted fetus sent to earth from limbo. And because the Tikbalang is lifted from the Philippine folklore, the cosplayer who wore the horse head is also wearing the Barong Tagalog—the Philippines' traditional men clothing!

The only character in the event which was based from a short film was seamlessly portrayed by the champion cosplayer who won the recent Virtuocity competition—also organized by Q Cosplay—3rd of this month. He said that his zombie character is unnamed as the apocalyptic thriller where his character was lifted from was just 7 minutes long and the logline is pretty simple and straightforward.

It goes like this: Stranded in the midst of a zombie apocalypse, a man sets in motion an unlikely plan to protect his precious daughter.

After the short feature received a surprising number of YouTube views, it was later on converted into a full-length film by non other than Netflix starring Martin Freeman.

Dexter has been one of America's favorite moonlighters for many years now since the TV series' first episode in 2006. By day, mild-mannered Dexter is a blood-spatter analyst for the Miami police. But at night, he is a serial killer who only targets other murderers. The series is based on a collection of novels by Jeff Lindsay and the cosplayer who wore Dexter's bloody lab gown during the Friday the 13th parade ultimately lives up to the TV character's trademark—mysterious and creepily dodgy.

10. The twins and Jack from 'The Shining'

If Q Cosplay and Megapolis Entertainment Center gave out a 'Best Trio' award, then these siblings will be the runaway winners! Their costume is based from the award-winning 1980 classic 'The Shining' which chronicles the story of Jack Torrance (Jack Nicholson) who becomes a winter caretaker at the isolated Overlook Hotel in Colorado, hoping to cure his writer's block. Together with his wife and son, Jack will discover the hotel's dark secrets while trying to fight the homicidal maniac lurking within him hell-bent on terrorizing his family. In the movie, the Grady twins (pictured) have been murdered with an axe after their hotel-caretaker father developed the world's worst case of cabin fever—thus the axe that the older brother (boy in brown top) is displaying in this photograph.

This shouldn't be here, but because we admire these kids' efforts to personify the characters that they're playing, ILQ is giving them a big thumbs up! Keep killin' it, boys!

Keep following Q Cosplay on their social media accounts to keep yourself updated on the latest geek events in Qatar! Check out their details below!

What do you think of the fast emerging cosplay community in Qatar? Do you see yourself dressing up for a cosplay event in the future? If yes, who are you planning to portray? Drop us a line in the comments below and also, don't forget to like and share this article—it keeps us going!