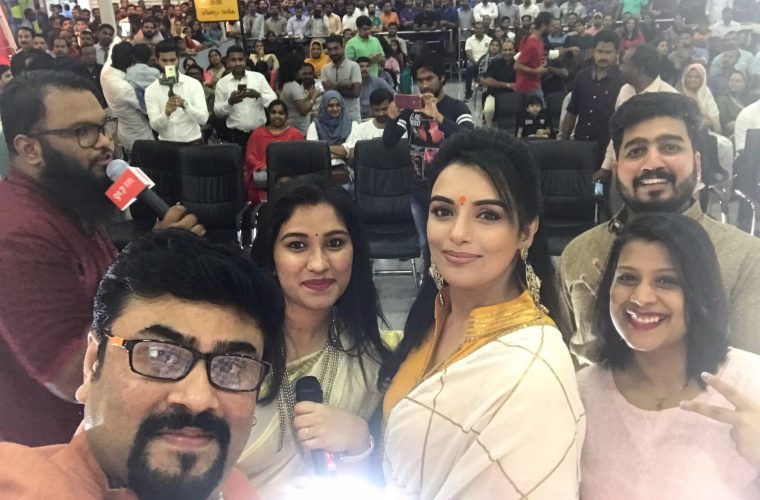 The first anniversary of Qatar’s Favourite Malayalam Radio Station, Radio Suno 91.7 FM is being celebrated with great pomp and show. As part of the celebrations, Radio Suno has organized a special show named “Seven days seven stars” where seven talented stars from the Malayalam Film industry would enthrall the fans in Qatar. The event started on 1st November by welcoming the first celebrity, Ms Shweta Menon, former Femina Miss India Pacific , who has predominantly acted in Malayalam and hindi language films. She was one of the contestants in the recently aired TV reality show in Malayalam, Big Boss. On 1st November, Shweta hosted one of the Radio shows as the Celebrity RJ entertaining the listeners and also inaugurated the newly opened “Thattukada” restaurant at Safari Mall. The overwhelming response from everyone who attended the Road show at Safari mall proved that Radio Suno 91.7 FM is indeed Qatar’s favourite Malayalam Radio Station. The second day of the Event witnessed Gorgeous actress from south, Roma Asrani who has acted in Tamil, Telugu and Malayalam Movies. As the celebrity RJ on the second day of the event, Roma too captured the hearts of her fans and the listeners . “Only two days have passed, and the response is massive. We still have five more days and five more celebrities to conquer the hearts of our listeners. I am sure we would be able to enrapture everyone with this event and our talented stars.” Stated the Managing Director, Radio Olivesuno, Mr Ameer Ali.