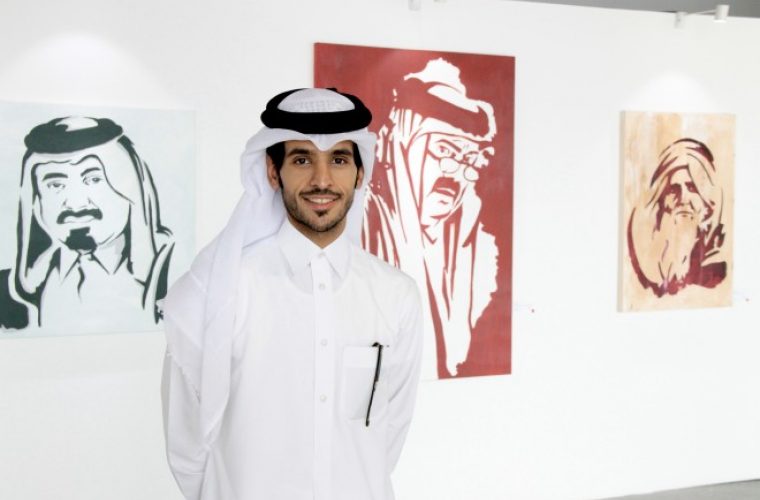 History was made in Qatar with the creation of the iconic image of His Highness the Emir Sheikh Tamim bin Hamad Al Thani, more popularly known by its name ‘Tamim Al Majd’ which translates to ‘Tamim the glorious’ in English.

This image has taken Doha by storm. People have made the ‘Tamim Al Majd’ image their symbol of unity and solidarity amidst the prevailing GCC crisis. This image has been put up outside people’s homes, been designed in foam art in people’s coffees, put on t-shirts, and even put on buildings in Doha’s hustling and bustling West Bay area. Not to mention Qatar’s main telecommunication service providers changed their network names to display ‘Tamim AlMajd’ instead of Ooredoo and Vodafone.

Although we’ve been hearing about and seeing the ‘Tamim Al Majd’ image all over Doha, we also wanted to find out a bit more about the person behind this viral sensation. ILQ recently got to meet and speak with Ahmed bin Majed Al Maadheed, the artist behind the historic image of the Emir.

Pictured above: The artist with 'Tamim Al Majd'

The young artist, 28-year-old Al Maadheed, has already launched two exhibitions of his work which is currently being showcased at Art 29 at the W Doha Hotel & Residences and at the Doha Fire Station. “First of all, all these paintings I did in my free time [is] from my passion in art,” Al Maadheed said. He’s a self-taught artist and has been practicing ever since he was a child. Al Maadheed initially began his pursuit of art in the design and branding realm. He has worked on animation for local television and designed mascots for sporting events such as the Asian Cup and the Arab Games, which both took place in 2011.

The images started gaining traction on Al Maadheed’s social media platforms, where he’s shared most of his artwork. What grew to become the iconic ‘Tamim Al Majd’ image was initially meant to be a graphic for Qatar National Day.

“[I] wasn’t expecting these things. We are showing more unity, and all the people living in Qatar here they have become more [united] under Tamim Al Majd, under Qatar,” Al Maadheed said. “We come under one family, it’s called Qatar.” He also shared that the crisis deeply impacted him emotionally, and that he released these emotions through his artwork.

Alongside the image of the Emir, Al Maadheed also created a number of other portraits and depictions, each representing Qatar in some way or another. Joining the portrait of the Emir are portraits of HH the Father Emir Hamad bin Khalifa Al Thani, HH Sheikha Moza bint Nasser, HE Sheikh Khalifa bin Hamad Al Thani, as well as Turkish President Recep Tayyip Erdoğan.

The popularity and reach of the ‘Tamim Al Majd’ image even landed Al Maadheed a meeting with the Emir himself. “I was very happy, it was my honor to meet him and it was my pleasure to give him the original artwork,” Al Maadheed said. “[People] have found something to explain their feelings through this image. It’s become kind of like a flag. It’s not because of me, it’s not because I’m the artist, no, it’s because he’s the Emir himself, and we love him.”

Al Maadheed also shared his appreciation of Qatar and the Emir. “…He’s doing great things in the country. And we love him, all the people love him, that’s why they use this image. Why this image? Because it’s God’s will. Thank God.”

Al Maadheed said that he’s done a lot in his life, but he feels that creating the image of the Emir was heartfelt and has helped people get to know him better. “…It feels like I have more responsibility in society. Qatar gave us a lot of things, we must give back to Qatar.”