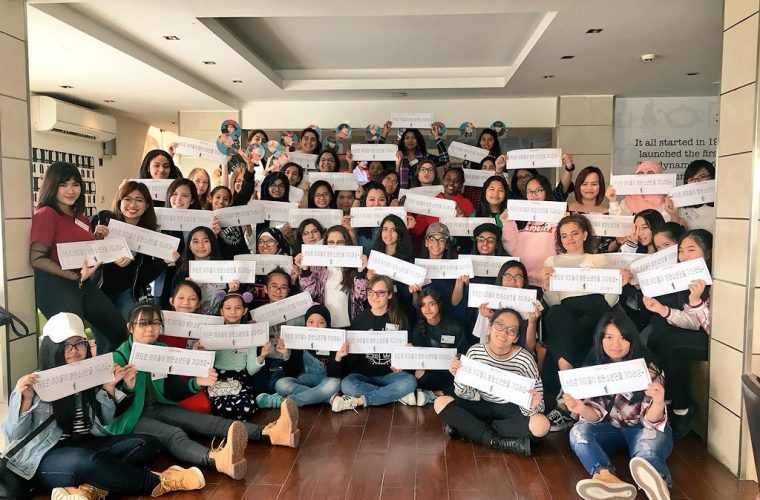 Korean pop, or K-Pop as it is fondly called, is famous worldwide and Qatar is no different. There are many K-Pop bands out there, but perhaps BTS is the most successful K-Pop band, not only in Korea, but also on the U.S. charts, with such hits songs as ‘No More Dream’, ‘DNA’, ‘Fake Love’, ‘I Need You’ and ‘Dope’ amongst others. They have also won the Top Social Artist Award at the 2017 and 2018 Billboard Music Awards, along with a string of others.

B.T.S. 방탄소년단 (Bangtan Sonyeondan) in Korean translates to ‘Bulletproof Boy Scouts’ and A.R.M.Y. stands for ‘Adorable Representative MC for Youth’. With that being said, Bangtan (or body armour) is always part of the ARMY (military) and go hand-in-hand, just like how BTS and its fans will always be together.

How QATAR BTS ARMY was created

The seven-member band, BTS, debuted in Korea in 2013 and BTS ARMYs also debuted around the same time, but the group’s fan base really started gaining momentum in Qatar in January 2018 when four members of Doha’s expat community, who shared a passion for BTS and its music, started interacting with each other through Twitter. As their association with each other grew, they started reaching out to other BTS fans in Qatar and started a casual Twitter group chat to discuss BTS. In the last week of January 2018, BTS’ song ‘Mic Drop’ was played on the local Qatar Broadcasting Station radio, FM 97.5. This came as a pleasant shock to a lot of people because it was very unusual to hear a Korean song being played on any local Qatar radio station. As a result, tweets related to BTS and Qatar increased and BTS ARMY numbers multiplied. The Twitter hashtag #BTSinQatar was used to connect with other ARMYs to show them that Qatar also had an ARMY community.

The purpose of the QATAR BTS ARMY was to put themselves on he map to voice their opinions and show people that they’re determined to work with BTS ARMY, represent them in Qatar and unite all their efforts together. On 22 March 2018, QATAR BTS ARMY was officially created.

The four pioneer members of QATAR BTS ARMY then went on a hunt for more BTS ARMYs in Qatar on Twitter and succeeded in rounding up more fans. Within no time, QATAR BTS ARMY shifted from a casual group chat on Twitter to a group with serious plans and projects. More members were added to the core QATAR BTS ARMY fanbase. To date, there are seven team members that manage the fanbase. They are Anax, Amani, Den, Jhenn, Maryam, Rea and Sam. They are all from different parts of the world and were brought together through their love for BTS. They all work in different fields such as advertising, engineering, food and beverage, and the medical industries. They all believe that BTS has played a huge part in inspiring and motivating them and other members to do well with their studies or work.

What brings members of QATAR BTS ARMY together

The fans in Qatar are referred to as “Qrystals” which is a name collectively set for all ARMY members residing in Qatar, where Q is for Qatar, and “rystal” comes from the word ‘crystal’, which is what BTS calls members of its precious ARMY. These Qrystals have come together not only because of their love for BTS, but also because while interacting with each other, these BTS Qrystals confessed that they found the boy band’s songs soothing and comforting. Some also confessed that they found out about BTS quite by accident at difficult times in their lives, and felt their music helped in finding the right direction for the course of their lives.

What is the purpose of QATAR BTS ARMY

Who would have thought there would be so many fans of the South Korean boy band BTS in Qatar? Well, there are and that's where the QATAR BTS ARMY comes in. The main purpose of the QATAR BTS ARMY is to gather all the ARMYs residing in Qatar hoping that someday, they will be able to see the world famous K-Poppers live in the country they now call home. Their aim is to help BTS be known and get their music acknowledged in the Middle East and especially here in Qatar.

Technically, the fan base promotes BTS in Qatar and voices out the interest of the ARMYs to bring BTS here to perform and steadily spread their message.

QATAR BTS ARMY administrators constantly tweet updates of BTS’s success, records, global tour schedules and BTS achievements in Qatar such as BTS songs charting on iTunes, Anghami, and just about everything related to BTS in Qatar. They, also, occasionally sell official BTS merchandise at original prices on an almost no profit basis to help fellow ARMYs who can’t afford the merchandise. And lastly, they share photos and videos related to BTS sightings in Qatar.

Who are their members

As of date, The QATAR BTS ARMY has 602 followers on Twitter (@QATARBTSARMY) and 293 followers on Instagram (@qatarbtsarmy). Followers mainly consist of Qrystals aged 15 and above; most are university students and working adults. The cultural diversity and age range is no joke in this fan base! There are even mums in the ARMYs who absolutely love BTS!

BTS has a large Qatari following as well with more and more Qatari youngsters drawn to the lively music that has made BTS so famous. Each BTS song is catchy and tells a different story that makes listeners hearts melt despite the language barrier. Music is truly a universal language. Specifically, through BTS, people of different ages, nationalities and beliefs have been united as one.

The QATAR BTS ARMY held their first ever fan gathering in Doha on 6 April 2018 to get to know the Qrystals better and share stories on how they became part of the ARMY. The next gathering is scheduled for December 2018 and deatils will be revealed soon.

Through ILQ, QATAR BTS ARMY thanks its Qrystals from the bottom of their hearts for not only supporting BTS but also the fan base. They appreciate every heartfelt message they receive and look forward to the continuous support of all the ARMYs in Qatar (QATAR BTS ARMY is not the only one) and around the world. Just like what the ARMYs are to BTS, the Qrystals are the wings of the QATAR BTS ARMY – their motivation and their inspiration – to do more and bring people together on one platform and nurture the positive vibes which BTS is famous for!

For more information, get in touch with QATAR BTS ARMY on: