Get to know Faraway Martin: A rising Irish singer and songwriter based in Doha 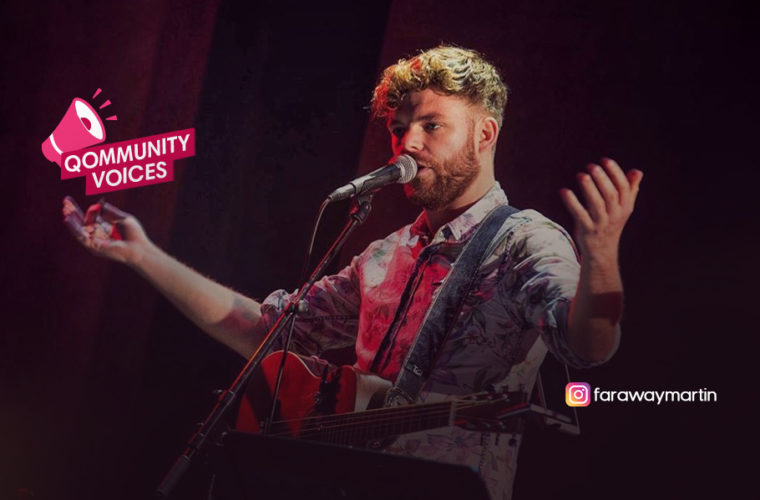 If you've seen a video of a band singing Mumford & Sons', 'The Cave' in Dhal Al Misfir, or the famous 'Bella Ciao' in Qanat Quartier, then you're probably already familiar with our interviewee for this week's Qommunity Voices!

Faraway Martin, Irish singer/songwriter, moved to Doha from Ireland in 2015 to teach music at Gems American Academy. Before the pandemic hit, he played regularly around Doha - in hotel brunches, The Backyard, and various other venues including some pretty cool private parties.

His last track 'The Lights Turn On' which was released last year, was playlisted on Irish stations RTE Radio 1, 2fm, iRadio as well as across local radio stations in Qatar - even reaching No. 5 on QBS Radio's Top 40, the largest station in Qatar. Since his last release, he has received international radioplay in the US, the UK, and across the Middle East.

He's now back in the music scene and has found his own sound through his latest release called 'Let You Down', his second single from his debut EP, which is scheduled for release later this year.

The ILoveQatar.net (ILQ) Team reached out to Faraway Martin to get to know the rising artist and his latest single! Scroll down to learn about his musical journey.

ILQ: Have you always been interested in music and songwriting? Please tell us more about your musical journey.

Martin: Yes! I come from a musical family so music has always been a huge part of my life. I started playing guitar when I was about 13. I practiced on my brother’s guitar at every chance I got! I started writing songs when I was about 15, Damien Rice’s music really influenced me. His songs are full of emotion and his lyrics are genius. I was lucky enough to meet him and play alongside him in Italy a couple of years ago. A dream come true! I played in bands through my teens and in college. I released my first solo single in 2018.

ILQ: Did you take any training classes and vocal courses to help you along your way?

Martin: I had my first voice lesson over zoom last week where two vocal coaches, Cathal Jack from Ireland and Greg Enriquez from the US analyzed my voice and worked on technique. Greg has coached Britney Spears, Celine Dion, and Courtney Love. It was such a cool experience, very insightful as a music teacher.

Martin: Anything could pop up on my playlists! From traditional Irish music to the Frank Sinatra, to Metallica! At the moment I’m loving Dermot Kennedy, Orla Gartland, and Tom Grennan.

ILQ: Where do you get your inspiration from?

Martin: That’s really tough to answer. Everywhere really! Travelling, relationships/friendships, books, and movies! I have a Google doc where I jot down things all the time, whether it be some lyrics or an idea for a song. It’s very useful!

ILQ: Can you tell us more about your previous albums and concerts/tours? How was it like being the opening act of international artists such as Bazzi and Boyce Avenue?

Martin: In 2019 I released a song called ‘I Wanna Go’. I bought a camper van and toured around Ireland playing shows in 23 different counties. It was exhausting but such a fun experience. I’ve also played in Australia, Italy, the USA, the UK.

Supporting Boyce Avenue was such an amazing experience. The QNCC is huge. It was crazy seeing myself on the screens on either side of that stage! It was great having these acts in Qatar!

ILQ: Can you tell us about your new single?

Martin: My new single is called ‘Let You Down’. It's a deeply relatable song that explores the shortcomings of the human condition and the unrealistic expectations people place on relationships. It delves into broken promises, being in denial, and the lies that are often said to protect one another from reality.

ILQ: What's next for you?

Martin: I’ve got a couple more releases coming out this year. I’m going back to Ireland for the summer and hope to play some live shows there. Hopefully, when I return to Doha in August, I’ll be able to perform again. I’ve had 1 gig since March 13th, 2020! I miss performing so much.

Martin: It would be cool to do a concert at Katara Amphitheatre.

ILQ: What's your message for the people in Qatar?

Martin: There are so many talented musicians and artists in Doha. Lots of original music too. When gigs return, I would encourage people to get out and support live music. So many people have been out of work due to the pandemic.

Also, check out my music on Spotify or whatever streaming platform you use - then you will know the words when the live shows are back.

Do you know of someone who’s got an exceptional talent or is making a difference in our Qatar community? Drop us a line in the comments below and you could see them highlighted in Qommunity Voices!