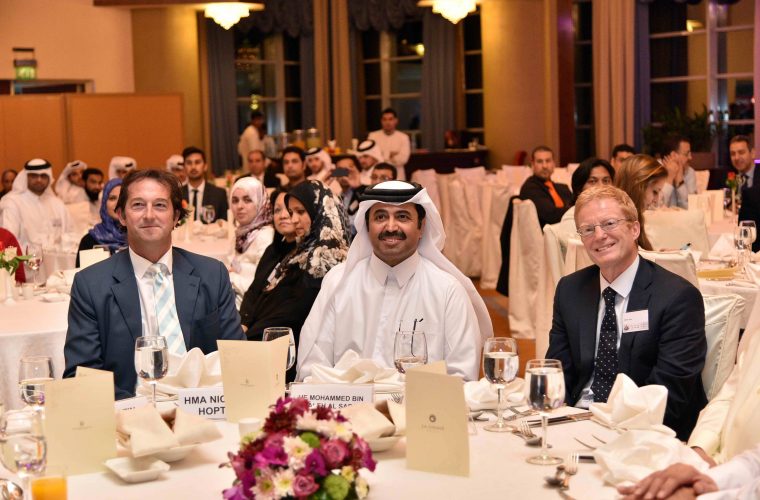 On evening of April 25 the British Council and the British Embassy welcomed 140 alumni from 75 UK universities to La Cigale Hotel for the annual Qatar-UK alumni networking dinner. The guest of honour was HE Dr Mohammed Bin Saleh Al Sada, the Qatari Minister for Energy who is an alumnus of the University of Manchester Institute of Science and Technology (UMIST) and Her Majesty’s Ambassador to Qatar, Nicholas Hopton, a former student of Cambridge University.

The evening began with a networking reception and was followed by a speech from Her Majesty’s Ambassador to Qatar in which he emphasized the close relationship between the UK and Qatar and the ways in which UK alumni contribute to the friendly relationship between the two countries. He noted that: “At any one time there are over 2000 students from Qatar in higher education in the UK, and the numbers are growing each year. We are proud of the strength of higher education in the UK and the recognition it enjoys for bringing advantages to graduates. Building on the strong links the UK alumni network in Qatar already has with the United Kingdom and the shared experience of living and learning in the UK, we hope that the members of the network continue to act as ambassadors working towards further strengthening the UK-Qatar partnership.”

The alumni were then treated to a speech by British journalist, historian and traveller Justin Marozzi about his forthcoming book which will tell the history of the Middle East fifteen 5 cities. Marozzi gained a double starred first from Cambridge University and has published five travel and history books including a history of one of the world’s great cities, Baghdad ‘City of Peace, City of Blood’ . He took the alumni on a journey through the highpoints and most dramatic moments of Arab and Muslim civilisation, focusing on one city per century, moving forward chronologically from Mecca in the seventh century to Doha in the twenty-first, via some of the greatest Arab and Muslim cities in history: “For Baghdad ‘City of Peace, City of Blood’ I studied one city over almost twelve centuries, for my next challenge, I thought I would study the 15 cities in the Middle East over 15 centuries; maybe I have gone mad but I do like a challenge!”

The range of alumni present at the event was incredibly diverse representing a wide range of disciplines – engineering, law, business, education, archaeology, architecture, science and sports management. One alumnus, It was my pleasure to meet you, and new people from different working areas, and reconnect with old friends. The event was brilliant as well as the venue and I highly recommend to do it again. One alumni, Khalid Al-Agha from Aberdeen universitysaid "I believe that this network will help to increase the relation between Qatar and UK in terms of friendship, education, and business. "

The British Council currently has 500 alumni registered in its network and announced an exciting programme of events for the year ahead. Martin Hope, Director of the British Council in Qatar said “We hope to build a strong community of UK alumni in Qatar. Our ambition is to grow the Qatar UK alumni network from its current five hundred members to two thousand over the coming years. The only qualification for membership is to have studied at a UK university and we encourage all UK alumni in Qatar to join us.