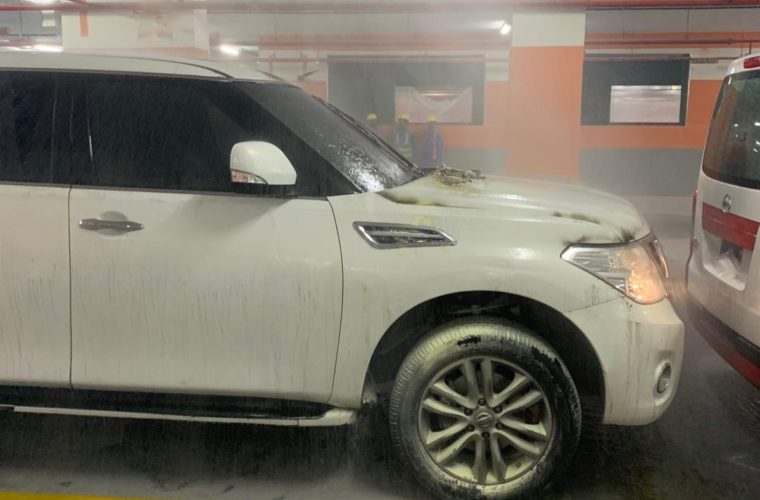 A car suddenly caught fire while parked unattended in a basement of a residential building in Doha. Luckily, Mr. Bora, a resident of the building saw what happened and proceeded to use a fire extinguisher to douse off the flames from the car's engine. The incident which happened before 7 pm Saturday night was reported to ILoveQatar.net team by a community member and we reached out to Mr. Bora to find out more about what happened.

Mr. Bora told the ILoveQatar.net team that he was on his way out when he saw the vehicle on fire with its engine still running. He stopped to help contain the fire along with the fire sprinkler system which was also activated. The fire was extinguished before it could cause more damage. The building management also arrived to investigate the incident and to search for the vehicle owner.

Many people leave the car idle unattended for quick chores which is dangerous. While it's more dangerous to do so during summer when the temperatures are high, it's still unsafe to do this during the winter due to the risk of fire and environmental impact.

In the past, there have been similar incidences of parked and idling cars catching fire. In response to this, the Ministry of Interior had issued reminders to vehicle owners to service their cars regularly.

The Ministry of Interior has also reminded citizens and residents that "Leaving the car engine running and getting off it for any reason, even if only for a short time, is contrary to traffic regulations and may expose you to the risk of crimes or traffic accidents."

Leaving the car engine running and getting off it for any reason, even if only for a short time, is contrary to traffic regulations and may expose you to the risk of crimes or traffic accidents.

RELATED: Important numbers to keep handy in Qatar for emergencies

Do you do this as well? Even if you're leaving for a few minutes only, make sure to apply the parking brake and switch off the engine.