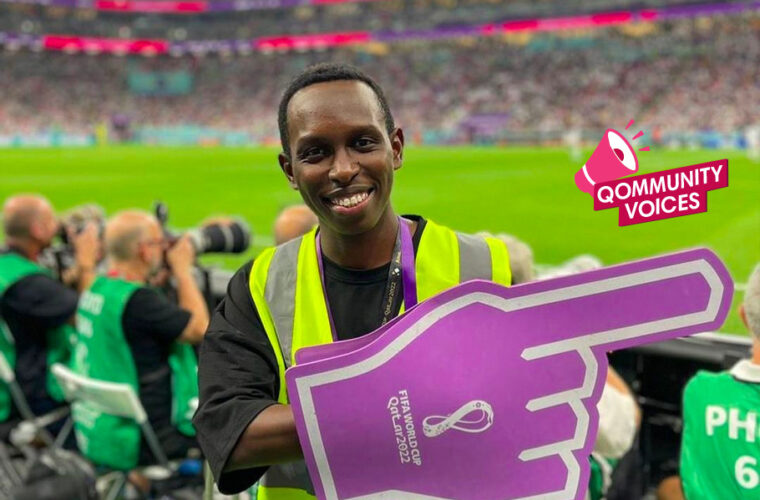 An unexpected viral sensation emerged during the first week of the World Cup 2022 tournament in Qatar when a World Cup last-mile marshall turned his job into entertainment for himself and metro travellers.

The gentleman was identified as Abubakr Abbas, who had the task of indicating the direction of the metro station from Souq Waqif (a popular tourist site) to the thousands of metro travellers who were mainly World Cup fans.

Abubakr soon got famous on social media platforms under the title 'Metro Man'. His videos went viral, and fans in Qatar got eager for a chance to meet him.

He inspired many other metro staff to adopt this way of making their job fun and spreading joy to the World Cup fans and other metro users.

The ILoveQatar.net (ILQ) team had an exclusive interview with Abubakr to hear more about his journey, experience and inspiration. Read on to find out more!

Where 'Metro? This way!' all began

Abubakr was excited to go to his first day at work, but when he was there, he realized that the spectators were just passing by and he was continuously repeating the metro directions with no reaction or response.

At this point, Abubakr wondered how he could engage with the crowd without just having them walk by. Then he came up with the idea that he would say "Metro" in various tones, and soon the crowd would respond to him by saying, "This way!"

He said that he never expected this small interaction with the crowd to become so popular during the World Cup.

Abubakr shared, "I didn't expect it, never did, and it just came about. When it did, I thought okay, that's the vibe, so let's go!"

Here's a quick watch of Abubakr on the job:

This guy sure knows how to add a fun flair to his job! What a way to make fans laugh as he points them in the right direction - the metro! 🤩👉

His time in Qatar

Abubakr is new to Qatar and arrived on 28 October 2022 specifically for an employment opportunity during the World Cup. He is currently employed under a short-term contract; however, he looks forward to a prolonged stay.

Abubakr expressed how he is happy in Qatar and is looking forward to exploring more! In his words, "I really enjoy Qatar...and when I get some time, I'll try and explore the place."

Metro Man at the England vs USA match at Lusail Stadium

We asked Abubakr about his experience at England vs USA match, where he was invited by the Supreme Committee for Delivery & Legacy (official hosts of Qatar World Cup) as a recognition and reward for his efforts.

Abubakr interacted with over 80,000 match fans at the stadium, where they chanted the phrase 'Metro? This way!' together.

When asked about the experience, Abubakr expressed, "It was amazing! I have never felt that way in my life, and I never expected it!"

A little bit about his background & family

Abubakr Abbas, fondly known as 'Metro Man', is of Kenyan origin and is 23 years old. His family still resides back in Kenya, and he has one sister.

When asked about his family's reaction to him getting famous, Abubakr expressed that they are very happy and he speaks to them every day.

Abubakr expressed that he intends to carry this social media fame by pursuing content creation. He said, "I want to go for the best and continue to another level."

Where to find the Metro Man

Abubakr is currently based outside the Souq Waqif main entrance. A landmark he shared is near the Stadium Express Buses.

Have you met the Metro Man? Are you looking forward to spotting him? Do let us know in the comments below. So share this article - it keeps us going!