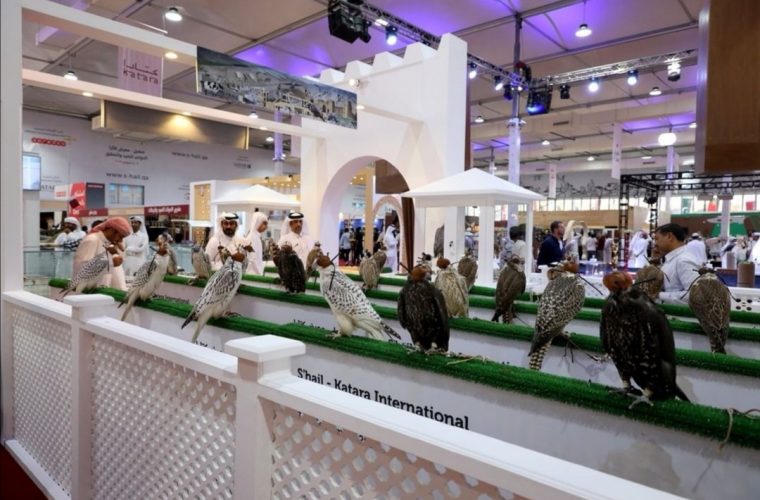 The third edition of the distinguished 'S'hail' - Katara International Hunting and Falcons Exhibition - opened at the Cultural Village Foundation - Katara on Tuesday morning amidst a grandeur setting.

The exhibition, considered the largest of its kind and class in Middle East and the world, has attracted more than 140 exhibitors of specialized international companies and manufacturers excelling in the field of hunting and falcons accessories from more than 20 different countries around the world.

Hunting enthusiasts and heritage lovers went around the vast expanse of the varied exhibition and sales began immediately at various sections displaying different hunting tools and guns, in addition to handicrafts and falcon accessories.

General Manager of Katara and the Chairman of the Organizing Committee for S'hail Dr. Khalid bin Ibrahim Al Sulaiti expressed his satisfaction on the progress of the exhibition on its first day saying that S'hail exhibition has emerged as an international hub for hunting and falcon enthusiasts with a reputable growth over the years since its opening in 2017.

"The numerous international participations reflect the success of the previous editions of the exhibition which attracted more and more of hunting-specialised companies and manufacturers, including falcon breeders from 20 different countries," Dr. Sulaiti said.

Dr. Sulaiti thanked all the sponsors, and in particular the Sports and Social Activities Support Fund, Ooredoo, QIC and Qatar Airways for their support for S'hail.

He also welcomed the people to visit the exhibition which is a great opportunity for all to see the cultural interest in falcon and the hunting wares and guns that are on display at S'hail which is spread over a vast area.

The falcon auctions, which is one of the unique features of S'hail, this time has a distinct addition by way of digitized auctioning.

The five days-long event is expected to receive several thousands of visitors over the next four days. This year, the exhibition also has a specialized restaurant catering to the visitors inside the grand pavilion premises offering fresh hunt food and barbecue.

The first of its kind in terms of size, exclusivity and diverse range of products from falcons to hunting tools to guns to customized vehicles to various hunting and camping accessories is a delight for both the connoisseur and commoner alike. The exhibition runs from 9 am to 10 pm daily. On Friday, from 3 pm till 11 pm. It ends on Saturday, September 7.

The current session is also marked by the distinguished participation of ministries, institutions and governmental and official bodies such as the Ministry of Interior, the Ministry of Municipality and Environment represented by the Department of Environmental Protection, Natural Reserves, and Wildlife, the General Authority of Customs, the Qatari Society of al-Gannas (Sniper Association) and the Al-Galayel Championship, in addition to the participation of the Qatar Shooting Federation and Souq Waqif Falcon Hospital.

Qatar, Kuwait, Britain, and Spain lead the participating countries with a large number of pavilions, providing options and exhibitions that contribute significantly to meet the aspirations and needs of visitors and enable them to discover the latest equipment, weapons, products and services offered in fishing.