How to survive a Zombie invasion! 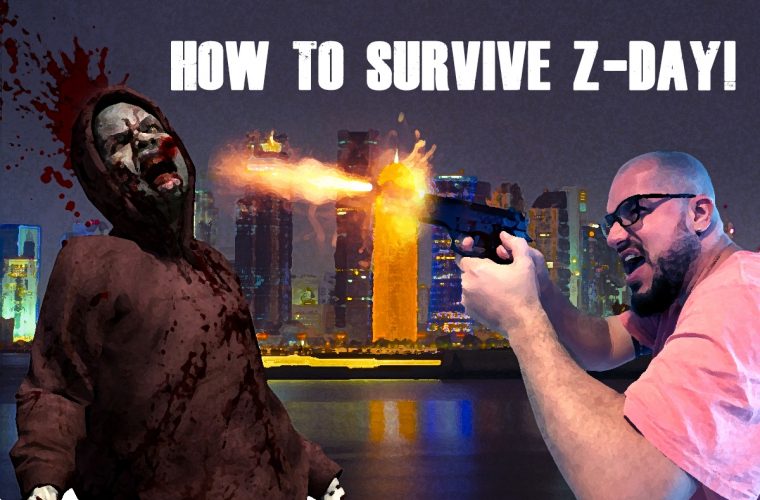 Science and its practical application will be the ultimate weapon for surviving an invasion of the undead. Science fiction, in the form of a written word or a film, has its own take on survival. Science fiction shows that the ultimate goal of self-preservation is almost guaranteed as long as a standard series of tasks common to the genre are accomplished along the way. Does science debunk these tasks or does it support them? Once these tasks have been completed are there underlying issues that manifest themselves as time has past? Science could warn people beforehand of these potential pitfalls helping to aid in their survival.

In science fiction surviving a zombie invasion always seems to boil down to the three basic issues of infection, the journey to safety and shelter. As long as a person does not receive a bite or scratch from one of these disease-ridden plague carriers, infection isn't a problem. It's only a matter of time before the bodies and minds of these cursed creatures wither away and humankind can begin anew. So all people need to do is travel to a safe place right? In theory, this makes perfect sense. Survival should be a sure thing once they enter the nearest fortified compound or military base. Science will show what will work and what may lead people to destruction using the above set of tasks as a guideline laid out so many times before in these works of fiction.

Every movie since George A. Romero's Night of the living dead has shown that so long as people are not bitten or scratched they will not be infected with the disease. In the Dawn of the dead remake, a man pinned beneath a zombie thrust a handle from a broken hammer into the jaw of a zombie all the way to the top of its skull spraying blood into the face, eyes, and mouth of the man. In Robert Kirkman's book, The Walking Dead two people cover themselves in the viscera of a nearby deceased zombie rubbing it all over their bodies so they can smell like the undead and avoid detection while walking amongst them. They did not receive a bite or a scratch so this is feasible, right? Wrong! If this were to happen they would be infected instantly with no chance of survival.

Blood spatter to the eyes, nose, mouth or an open wound is a death sentence. Essentially the eyes, mouth, and nose are the route of choice for an infectious disease since they are moist and filled with blood vessels. Contact transmission from the blood of another by both direct and indirect methods is always a danger. Flesh with a scrape or cut touching the blood of an infected carrier is a sure way to contract a deadly disease. This is the same as touching something with its putrid remains on it such as a table corner or a weapon. The Center for Disease Control and Prevention states in its Body Substance Isolation Precautions that numerous steps must be taken to avoid infection from a bloodborne pathogen. It requires all hospitals, ems, law enforcement, and firefighters to wear protective gloves and masks with eye, nose and respiratory protection when dealing with patients so spatter cannot be absorbed, swallowed or breathed in since it is airborne up to 3 feet. So the image of someone in leather hacking away as blood spatters everywhere is not the way to go. Always use Body Substance Isolation!

With infection and its methods of transmission safely out of the way, it is time to begin the journey to a safe haven. Zombies in the film The Land of the dead thought of ways to navigate a series of obstacles and make it to a populated city using basic hand tools and weapons killing everyone they staggered into along the way. They were once human so this must be plausible. It would seem so but as Dr. Trish Macnair, a Hematologist and Cardiologist points out in a paper written for the BBC, Brain Cells start to die within three to seven minutes. Skin cells start to die in 24 hours. A few days later muscles start to entropy and internal organs begin to expand and explode or liquefy. In the open air, it takes 24 hours for insects such as maggots to begin their infestation of a corpse. So after a few hours, the undead would not be able to travel very fast due to rigor mortis. The start of decay destroying their mental faculties would prevent them from solving problems such as how to get over a fence or break down a barrier. Staying focused and avoiding the slow-moving and thoughtless zombies should keep people out of trouble en route to their perspective shelters.

Infection and navigating safely through the zombie-infested streets is out of the way and people are beginning to arrive at fortified compounds and military bases which are always places of peace and safety. It is time to relax and worry about nothing but the defense of one’s territory. This is true until what Dr. Raymond Lam head of the division of neuroscience at the University of British Columbia calls Seasonal Affective Disorder starts to set in and cause strife amongst the survivors. SADS is typically brought on by long periods of darkness during the fall and winter months. It causes a sense of loss, feelings of sadness, lack of energy and mild to severe episodes of mania and aggression that can often only be treated by mood stabilizers such as Ativan or Lithium. Why would the lack of sunlight affect survivors in a compound? The darkness would last until the zombie outbreak was completely eradicated since all doors and windows have to be boarded up. This would give the human body a lack of sunlight leading to SADS. This, in turn, would lead to outbreaks of depression and violence with the severe infighting amongst the survivors. Typical arguments in a confined group of diverse survivors would be race, social class, sexual preference and all-important matter of food and water. When people make it to their safe haven they still need to remain calm, cool and calculating to avoid problems and ensure safety for themselves, their family and fellow survivors.

When comparing science to science fiction it seems clear that diligence, planning and careful study would aid one's survival in the event of a zombie invasion. So people should watch the movies and read the books to get an idea of what they may go through. But they must remember to apply real science to what they see. Science and science fiction though seemingly incompatible draw a grim outline of what is needed to outlast the impending outbreak and we would do well to heed the warnings of both of them.