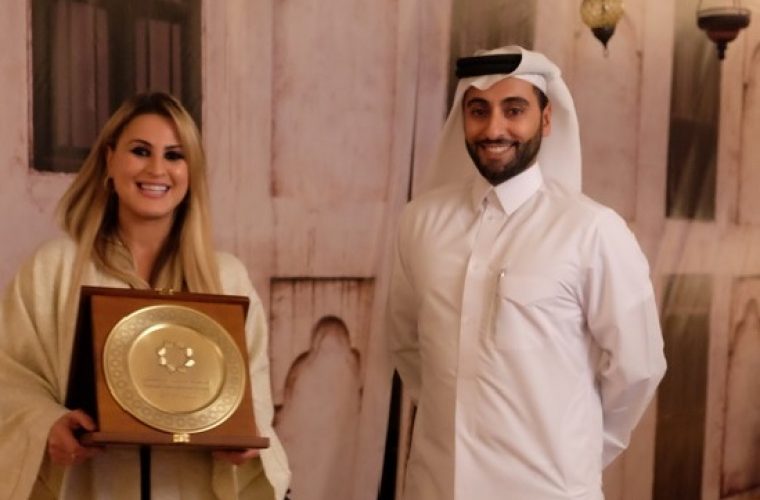 Dana Alfardan, a distinguished Qatari composer and songwriter, was recently recognised at the HIA Airport Stakeholders Appreciation Dinner, held June 13, 2016 at The St.Regis Doha, with the announcement that her song, ‘The Beginning’ will be Hamad International Airport’s (HIA) official theme music. The event, also titled ‘The Beginning’ highlighted HIA’s journey over the years, including its official inauguration as well as the launch of the official music theme.

The music for ‘The Beginning’ was composed by Dana Alfardan, founder of DNA Records, Qatar’s first home grown record label that is based in both Doha and London, with the musical piece performed by the Qatar Philharmonic Orchestra (QPO) in front of the iconic Lamp Bear at HIA as well as next to the airport’s runway.

During the event, a special video was also shown with footage of QPO performing ‘The Beginning’ at various locations around HIA. Dana Alfardan has confirmed that through this exclusive partnership with HIA, ‘The Beginning’ will played around the whole airport including its lounges, lifts and the special video will also be shown on board as part of the in-flight entertainment on Qatar Airways flights.

Commenting during the event, Dana Alfardan said: “I am beyond privileged and honoured for my song ‘The Beginning’ to be HIA’s theme music, and this is truly a dream come true. As an artist, it is always rewarding to have your work recognised and I am humbled that my song will now have HIA as its platform. HIA is a symbolic location for Qatar both within Qatar and the region, and I look forward to a lengthy and fruitful partnership with them.”

This is an exciting time for both Dana Alfardan and also for her record label, with the debut of her latest album, Sandstorm, a classic cross over album featuring a number of collaborations with other artists including MAias Alyamani, esteemed solo violinist which is now available on iTunes. Dana’s latest album, Sandstorm, an impressive musical showcase, that was two years in the making, features eleven tracks, all composed by Dana herself, and with a wide range of musical influences covering genres including Latino, Baroque and Swing.

Standout tracks on the album include Pride of a Nation, a musical tribute to Qatar which is a great source of pride for Dana, Layla, Dana Alfardan’s musical ode to her daughter, who she says is her greatest inspiration will these songs in particular being key pieces on her latest album.

Alongside the release of her latest album, more recently Dana Alfardan showcased a few songs from Sandstorm at a performance on June 3 at Cadogan Hall in London to an overwhelmingly positive response. Over the last 18 months, Dana has continued to enjoy a number of successes including having This Is Your Life, a track composed by Dana that was featured on international superstar DJ, Robin Schulz’s album, Sugar. In addition, in her role as the CEO of DNA Records, Qatar’s first record label, Dana is ensuring that she remains at the forefront of music in Qatar and the region.

Dana’s latest album, Sandstorm, is now available to be downloaded on iTunes.