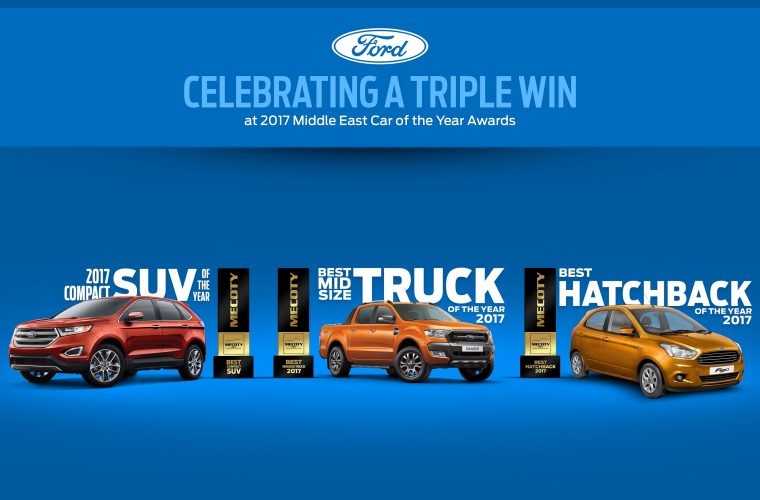 Ford came up winner in three different segments at the Middle East Car of the Year awards ceremony, held in Abu Dhabi over the weekend.

An extensive panel of judges, comprising 15 expert automotive journalists from nine GCC and Levant countries, awarded Ford’s new Edge the “Compact SUV” title for 2017 – emulating the award it received from wheels magazine earlier this month – with Ford Ranger claiming the “Best Midsize Truck” award. To round off a stellar day, the inimitable compact Ford Figo took the crown for “Best Hatchback”.

Edge has proved to be exceptionally popular in the Middle East since its launch, having already topped the judges’ wish list in its segment for Lebanon’s Automobile Car of the Year, Oman’s Automan Car of the Year, EVO Middle East’s Car of the Year, and earlier this month, wheels magazine’s “Crossover of the Year” award, making it the region’s most-nominated and recognised CUV.

The Ranger pickup truck delivers rugged design and superior comfort. When you consider how customers use their vehicles, it’s important that a Ranger not only looks tough, but functions as a dependable tool and offers the comfort and convenience drivers need. The award-winning truck’s impressive performance, capability, payload and towing capacity are made possible thanks to the latest generation of powerful, more refined and fuel-efficient Duratorq TDCi diesel engines, as well as the proven Duratec petrol unit.

Ford’s Figo benefitted from a bumper 2016 in Saudi Arabia, seeing a tremendous five-fold boost in its sales, proving that bigger isn’t always necessarily better. Buoyed by exceptional demand in the region, and new levels of sophistication, smart technology and safety in a hatchback, Figo was a shoe-in for the MECOTY trophy.

“At Ford, we strive to build vehicles that offer a blend of all-round performance and everyday usability,” said Thierry Sabbagh, Managing Director, Ford Middle East. “Seeing that the region’s industry experts at MECOTY, have named three different Ford models as best-in-class in 2017 is testament to the great vehicles we are producing year-on-year.”

The all-new Ford Edge cuts a bold, sporty and imposing figure on the roads. Wheels pushed out to each corner give a wide, aggressive stance and help maximise interior space. Raised ground clearance enhances off-road capability, and delivers a seating position for a commanding view of the road.

A fun-to-drive, responsive and agile character is enhanced with the sophisticated Ford Adaptive Steering system, which changes the ratio between the steering and road wheels according to vehicle speed. At lower speeds, such as when pulling into a parking space or maneuvering in tight quarters, the system makes the vehicle more agile and easier to turn. At higher speeds, it enables the Edge to react more smoothly and precisely to driver input.

Edge features three engine options, two of which are new powertrains – a standard twin-scroll 2.0-litre EcoBoost® four-cylinder engine producing 253 PS and 378 Nm of torque, and a 2.7-litre EcoBoost V6 producing 340 PS and 542 Nm of torque. A normally aspirated 3.5-litre V6 engine which boasts 283 PS and 340 Nm is also offered. All are equipped with dual exhaust and a six-speed automatic transmission.

For 2017, the new Ford Edge adds more technologies featuring the latest generation of Ford's innovative communications and entertainment system SYNC®3. In addition to other new languages, Ford’s SYNC 3 will support Arabic for the first time – both text and voice activation – enabling simpler control for Arabic-speaking drivers. With integration of Android Auto, Apple CarPlay, and Siri Eyes Free, SYNC 3 is one of the most intuitive systems available.

Navigation sees a greatly-improved system, including 3D support with landmarks, a Mecca compass, and enhanced junction view providing detailed lane visuals and guidance. SYNC 3 also provides full dead reckoning support, 1.5 million points of interest and 1.3 kilometres of road, and comes with free map updates for five years; a necessity for the ever-changing and evolving landscape of the Middle East.

The new Ford Ranger Pickup has proven itself as one of the toughest and most capable vehicles in its class. With an exceptional 800 mm water wading depth, and with 230 mm of ground clearance, it is designed and engineered to handle the most extreme terrains with ease. Thanks to a 28-degree approach angle and 25-degree departure angle, drivers in the new Ranger can feel confident when taking on steep obstacles. The new Ranger proudly takes this legacy even further with upgraded engines, the adoption of electric power steering and improved ride quality and comfort.

The new, modern look lends a powerful presence on the road, and immediately conveys a sense of capability. The design is defined by a strong new trapezoidal grille, flanked by imposing chiselled projector headlamps that are shaped to flow into the front wings. This clearly accentuates the width and strong stance, thus making the new Ranger instantly recognisable with a bold, technical look.

The Ranger Pickup’s impressive performance, capability, payload and towing capacity are made possible thanks to the latest generation of powerful, more refined and fuel-efficient Duratorq TDCi diesel engines, as well as the proven Duratec petrol unit.

The Figo offers new levels of sophistication, smart technology and safety in a compact saloon. The Figo is the first compact saloon with standard driver and passenger airbags to help protect occupants in collisions and with up to six airbags available for even greater protection. For the ultimate combination of performance and fuel economy, the Figo is also available with a refined and sophisticated 1.5-litre Ti-VCT petrol engine, offering an impressive 112 PS of power and 136 Nm of torque at 4,250 rpm.