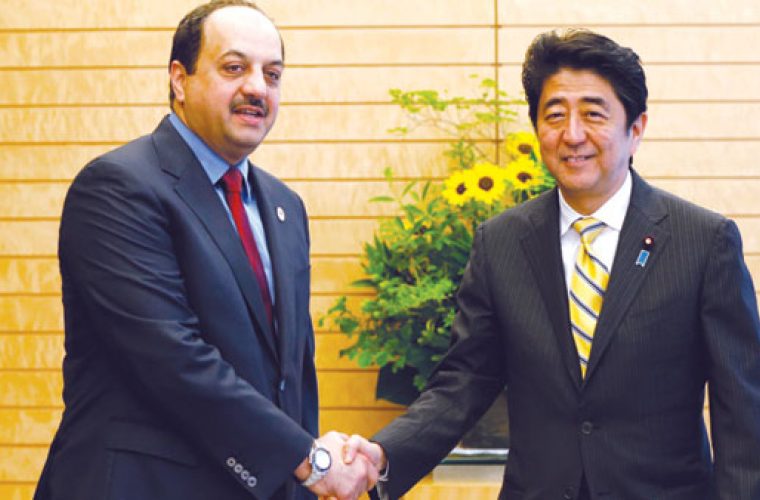 The Foreign Minister is on a two-day official visit to Japan.

Japan thanked Qatar for the development projects it is undertaking through the Qatar-Japan Fund for the reconstruction of the areas affected by earthquakes and Tsunami which hit Japan in March 2011, an official source at the Qatari Ministry of Foreign Affairs said in a statement to Qatar News Agency (QNA) yesterday.

The $100mn fund was launched under the initiative of HH the Father Emir Sheikh Hamad bin Khalifa al-Thani. It is now sponsored by HH the Emir Sheikh Tamim bin Hamad al-Thani under the direct supervision of HE the Foreign Minister. The fund is chaired by Qatar’s Ambassador to Japan Yusuf Mohamed Bilal.

The fund is supporting several sectors such as fisheries, healthcare, education, technology, scientific research and entrepreneurship.

The Foreign Minister said: “Such projects have given us the opportunity to have multi-faceted relations with Japan. He stressed that the Qatari leadership, at the directives of HH the Emir, is keen to further enhance relations between the two countries.

The Foreign Ministry source said that the Foreign Minister informed the Japanese side Qatar’s keenness to exchange visits at the official and popular levels so that the Qatari citizens and their Japanese counterparts can explore and get acquainted with each other’s culture, heritage and civilisation.

Japanese Premier Shinzo Abe praised the relations between the two countries and the reciprocal visits by senior officials of the two sides. He said such visits reflected the in-depth partnership between Qatar and Japan.

Several other issues of mutual concern and the situation in the Middle East were also discussed.

The meeting was attended by Japanese officials and Qatar’s Ambassador to Japan Yusuf Mohamed Bilal.

During the meeting, the two ministers discussed bilateral relations and the latest Arab and international developments.

They also reviewed key projects being undertaken by the Qatar-Japan Fund for the reconstruction of the areas affected by earthquakes and Tsunami of March 2011.

The meeting was attended by Qatar’s Ambassador to Japan Yusuf Mohamed Bilal, Tsukasa Aomiura, the director general of the Middle East and African affairs department at the Japanese Foreign Ministry and senior ministry officials.