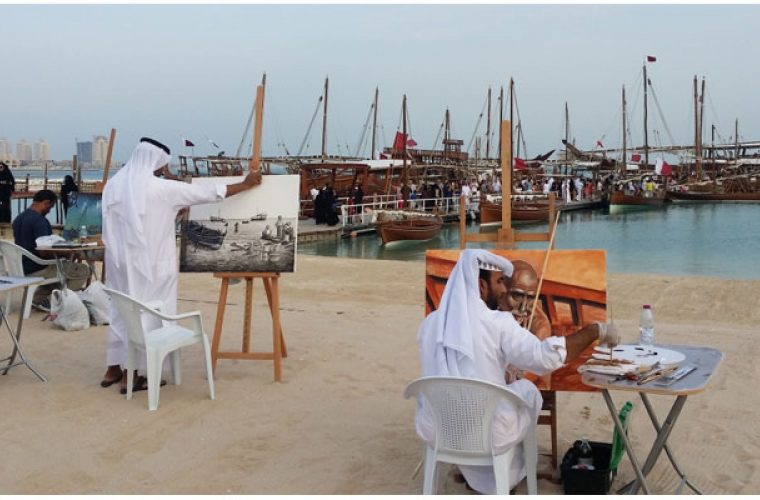 The cultural activities, trades and boat competitions at the Fifth Traditional Dhow Festival continued to attract a large number of visitors on Friday. The event is concluding Saturday.Taking place at Katara – the Cultural Village beach, hundreds of visitors and families had the opportunity to witness the rowing competition participated by 10 teams.Winners of major events such as fishing and pearl diving competitions will be crowned today at the awarding ceremony. The painting contest was one of the many attractions for families, especially for those who have passion for art and culture.Participating artists showcased their masterpieces at the event which focused on the dhow’s historical significance to Qataris.“We want to inspire the youth, as well as other residents, to get involved in the arts,” one of the organisers told Gulf Times, adding that the festival has enticed many young artists in the past five years.Wearing traditional costumes, a group of young children also enthralled visitors with their cultural performance. Besides the workshops, trades and attractions, the jewellery market which takes part in the festival for the first time was also a favourite spot for visitors. The stalls attracted a large number of ladies who were seen buying different items.A section was also set up for Qatar Authority for Standards and standardisation to help protect consumers against any fraud or fake jewellery products. Reiterating the importance of raising public awareness against fraud, authorities said they check the items properly without soaking them in a chemical solution.Other attractions and trades at the festival include a stall which features some of the tools used to harvest pearls, dhow-making workshops, traditional board games for all ages, ship-painting, handicrafts exhibition, netting, fishing using cages, and a traditional dhow race.An auction will also be held after the sunset prayers today for the sale of popular heritage and antique pieces. On the sidelines, different types of popular cuisines in Qatar and in the region were cooked to feed some 600 people participating in the activities.A dedicated kitchen was set up for a team of three chefs from Oman who had been preparing the food (grilled fish, lamb, and chicken) throughout the festival.The festival also featured a fine arts competition in which more than 25 artists of different nationalities participated.