Artist creates giant mural in Cairo without the government noticing 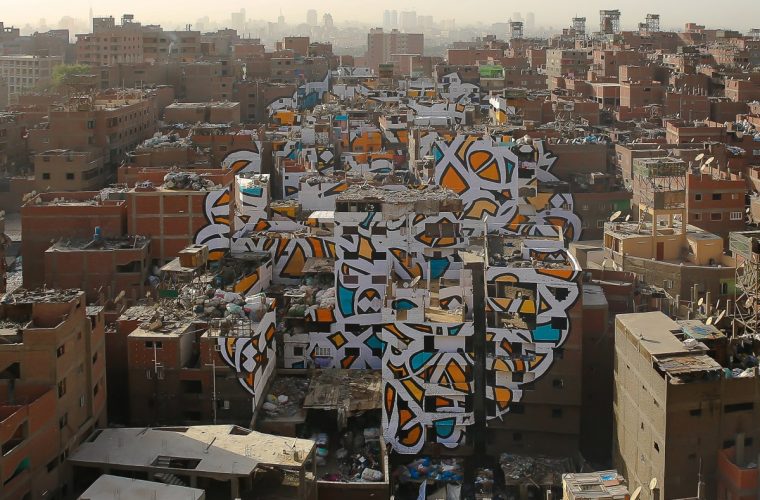 Amid Cairo's brick buildings and heaping piles of trash is a sprawling work of art, which, at first, looks messy and incoherent.

But when you stand on the nearby hillside and read the spray-painted Arabic "calligraffiti," as its creator Tunisian-French artist eL Seed calls it, the message reads loud and clear: "If one wants to see the light of the sun, he must wipe his eyes."

The quote represents the importance of withholding judgment of people just because of their circumstances, says eL Seed, who first visited the community a few years ago. He's called the piece "Perception" for just that reason, hoping to get people to see past the area's physical appearance.

The entire piece took three weeks to complete, and eL Seed says it was done in total secrecy from the Egyptian government due to the country's strict laws forbidding artistic expression.

Here's how his multi-colored vision came to life.

eL Seed says he first hatched the idea for the mural on April 2 of last year. "I sent a WhatsApp message to my friend saying we should do this crazy thing," he tells Tech Insider. 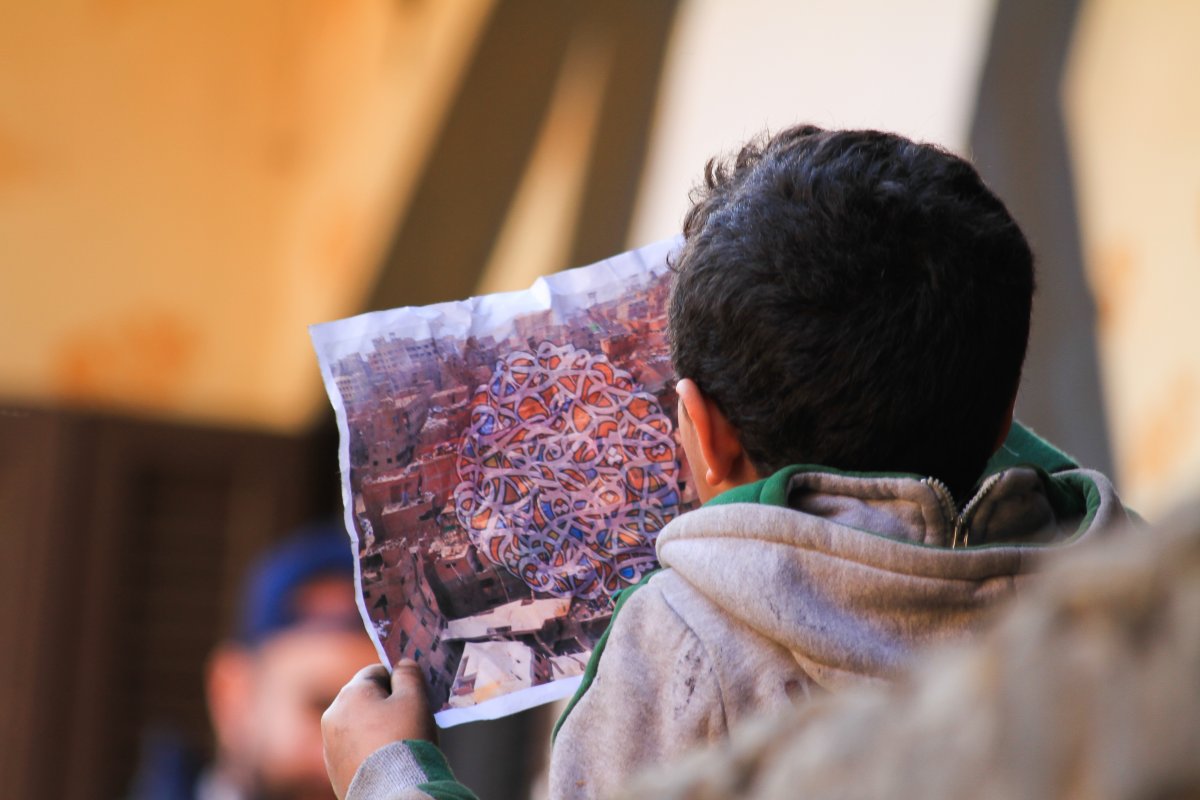 Before he and 20 others set to work on the project just outside downtown Cairo, in the Manshiyat Naser neighborhood, the area was mostly a nondescript slum. 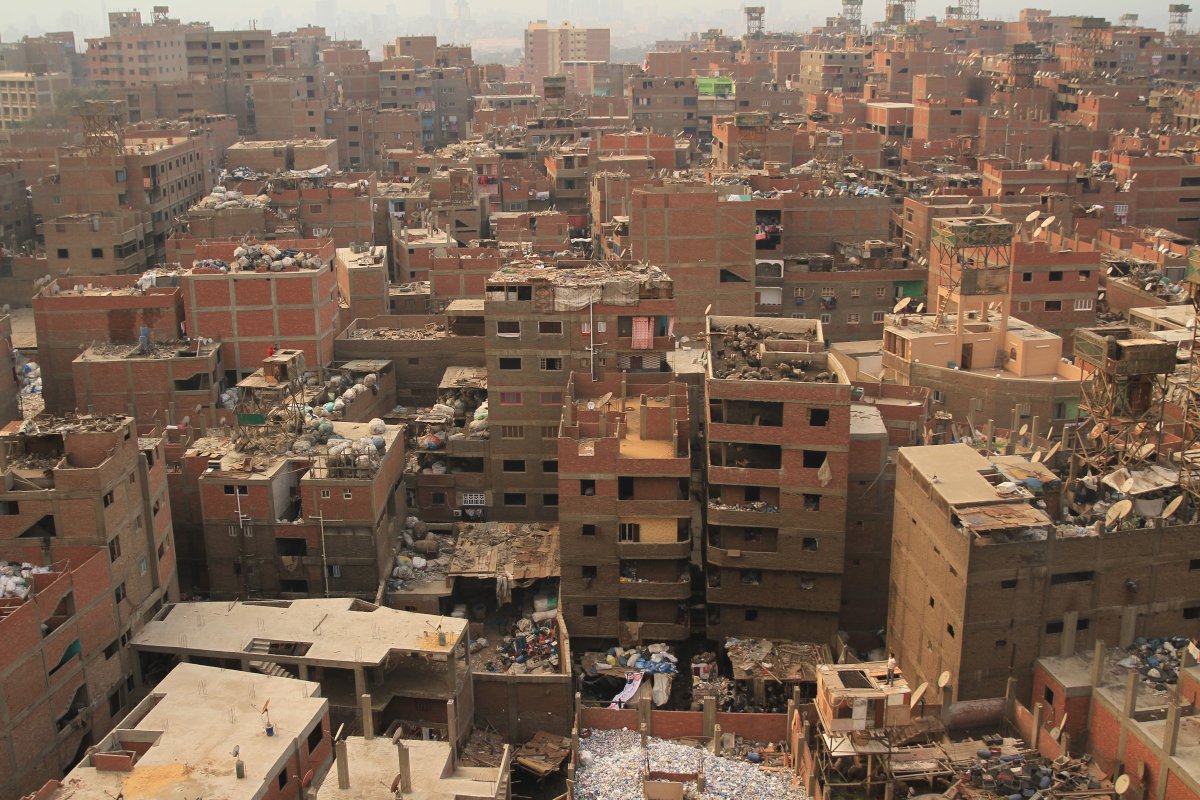 Armed with small scaffolding rigs and many, many cans of spray paint, the team set to work on turning the intricate illustration into a mammoth work of art. 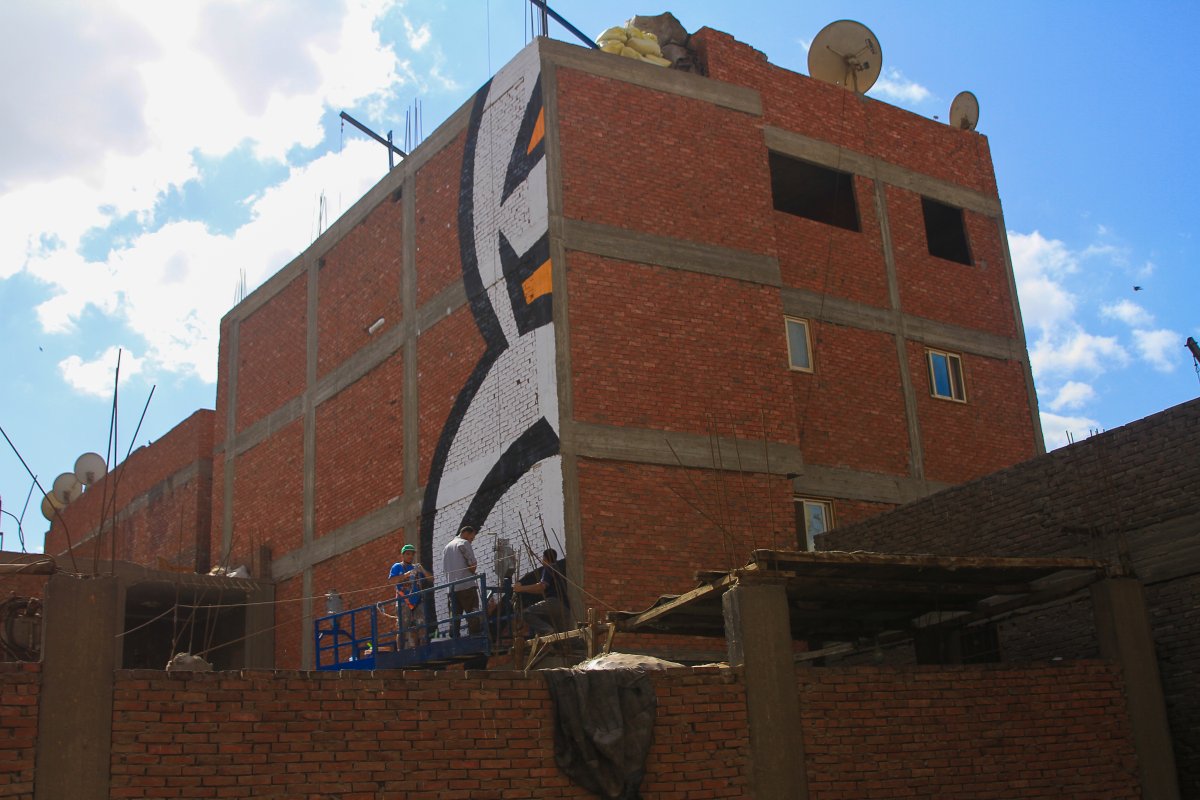 eL Seed says he didn't contact the Egyptian government before starting the project in order to protect the community where he'd be working. 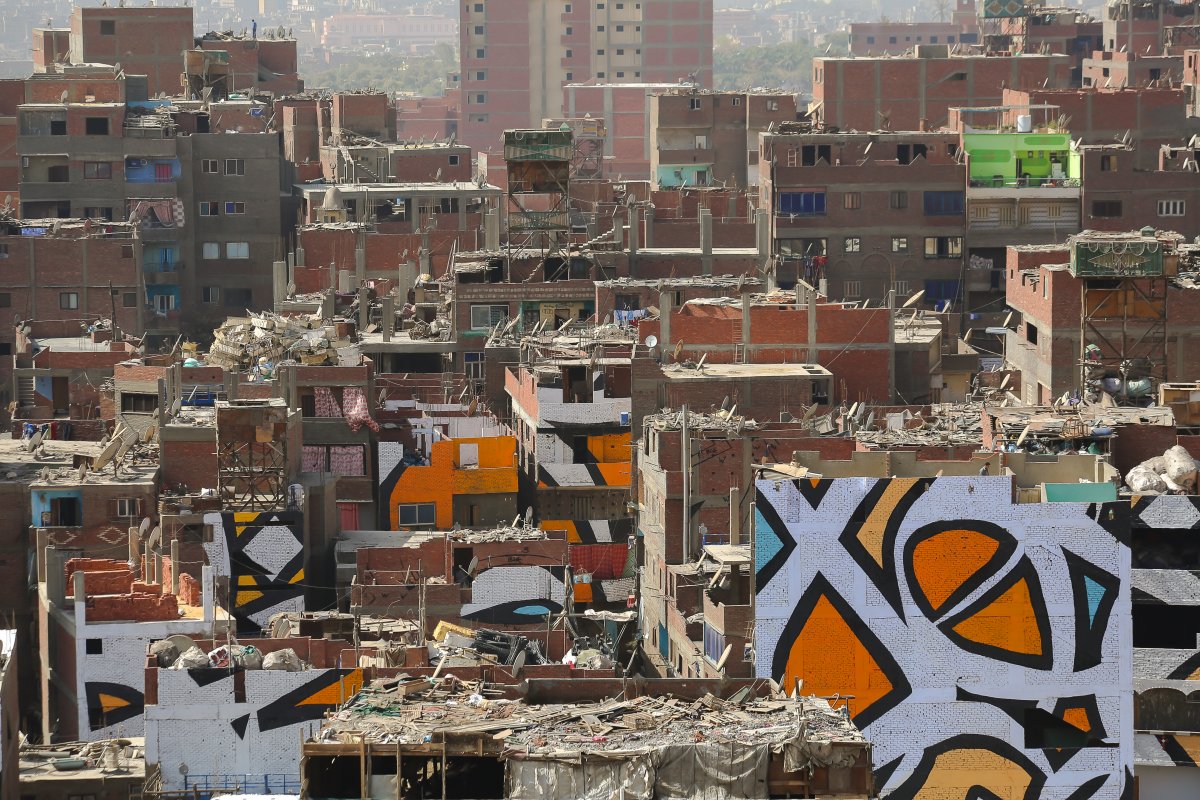 "We got the blessing of the priest," he says. "He gave us permission and everyone in the neighborhood knew about it." 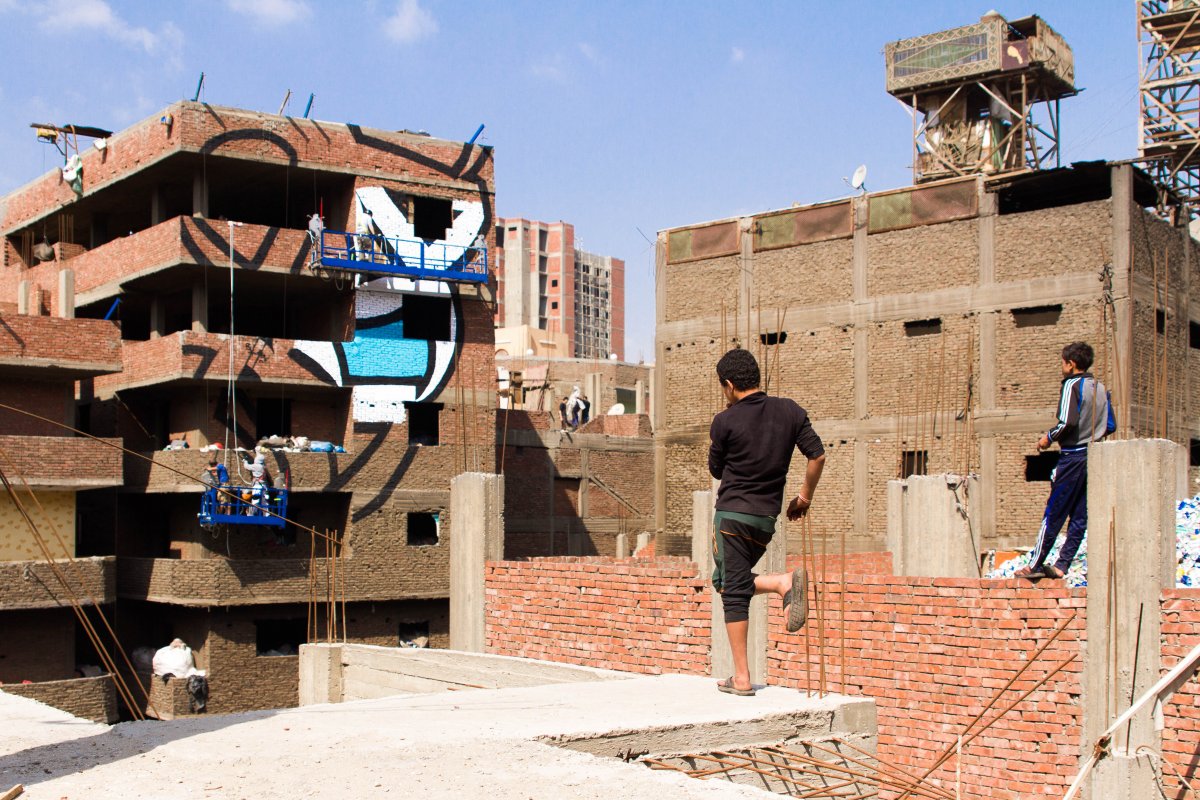 The crews worked around the clock to assemble each piece on the 50 buildings, arriving early in the morning and leaving around 8 p.m. 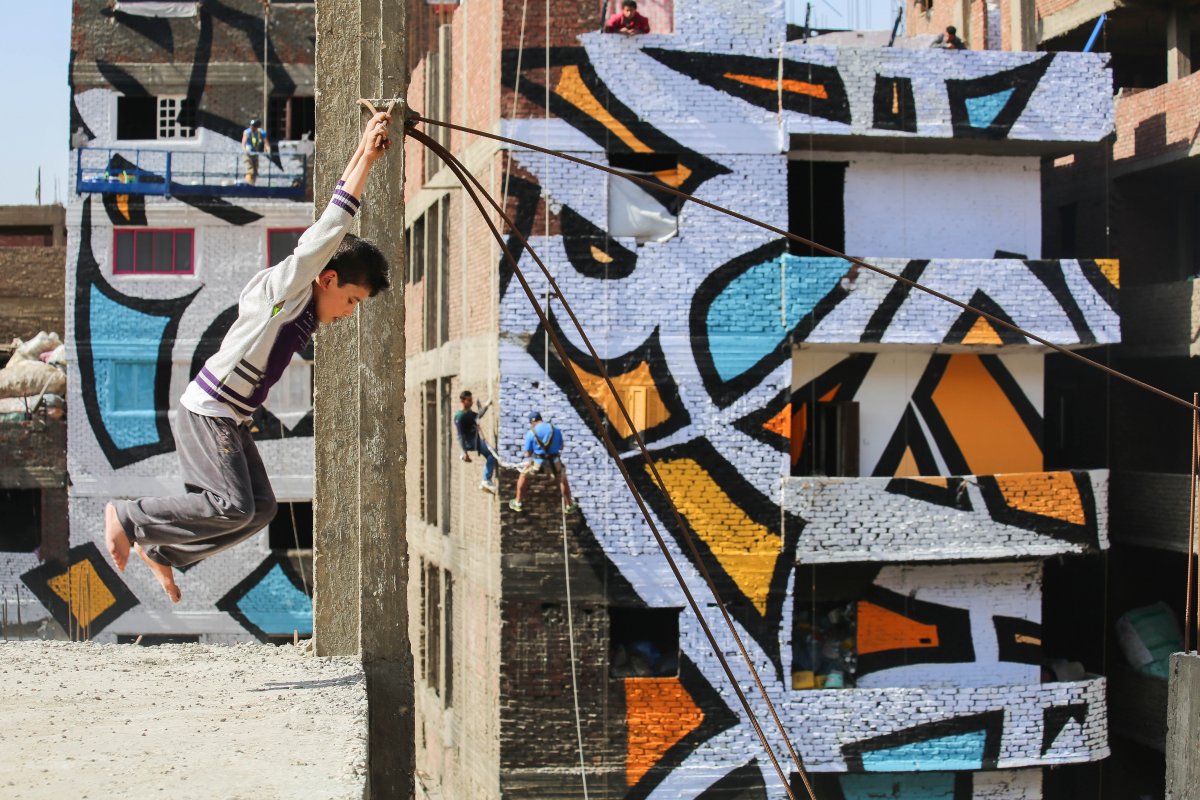 That often meant working in close quarters, which weren't always ideal — eL Seed says he frequently had to step over pigs and stomach foul smells during the project. 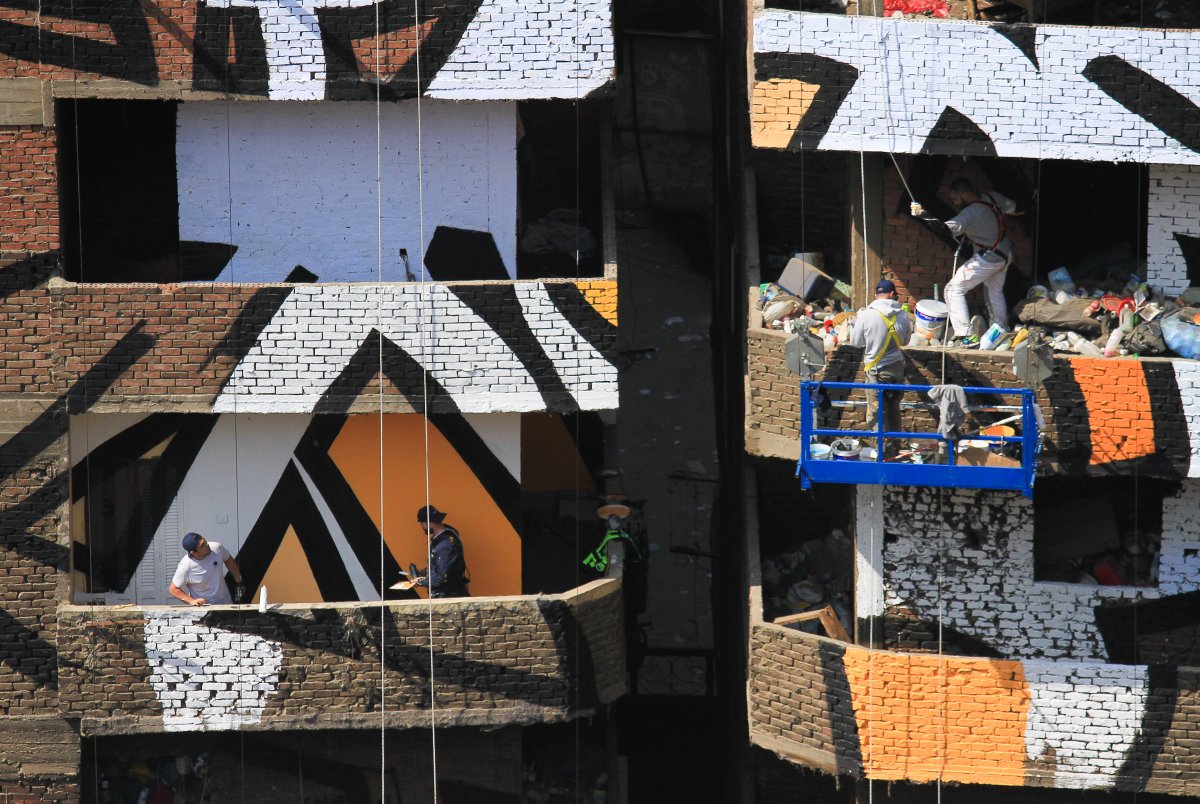 "We were trying to appreciate the moment," he says, pointing to the fact they were just visitors in this world, while those in the buildings had to live there full-time. 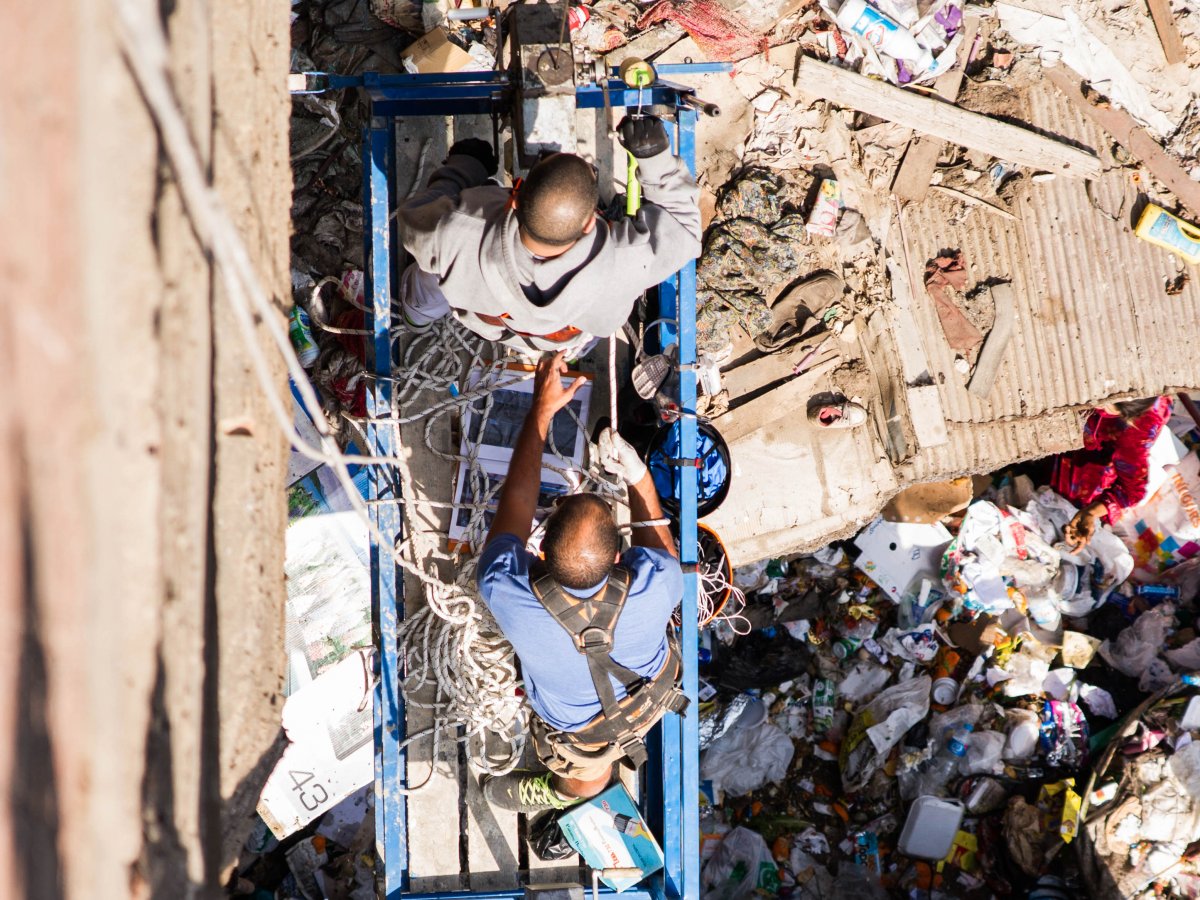 "Every time we go to a new building, we don't know what to expect," he says. "You reach for one ledge and someone offers you some tea and food. It's always a positive attitude, and that's what we tried to absorb." 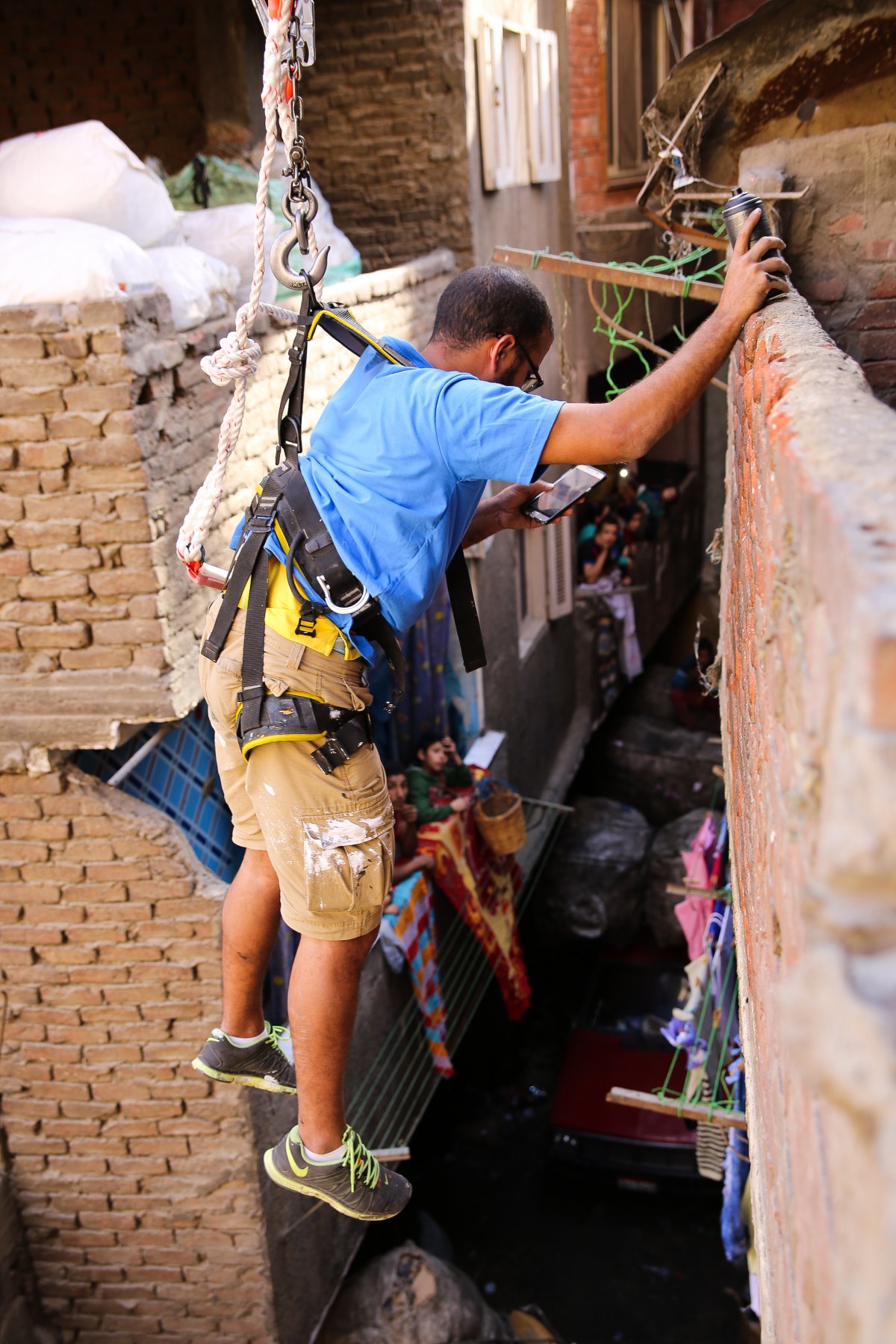 As for the project itself, eL Seed says he rarely stopped during the three-week period to see if he was making progress according to the original design. 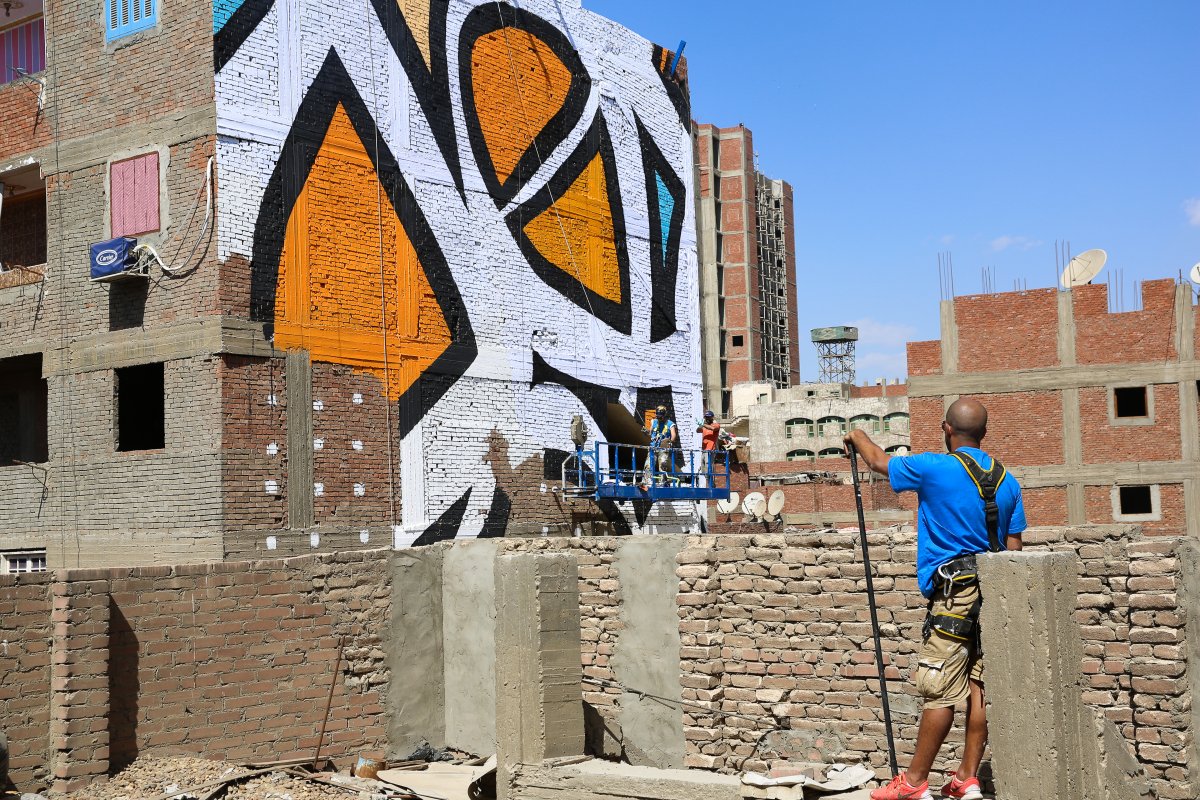 He admits he did mis-paint one small portion compared to the original drawing, but the point was never to create a flawless design, he says. 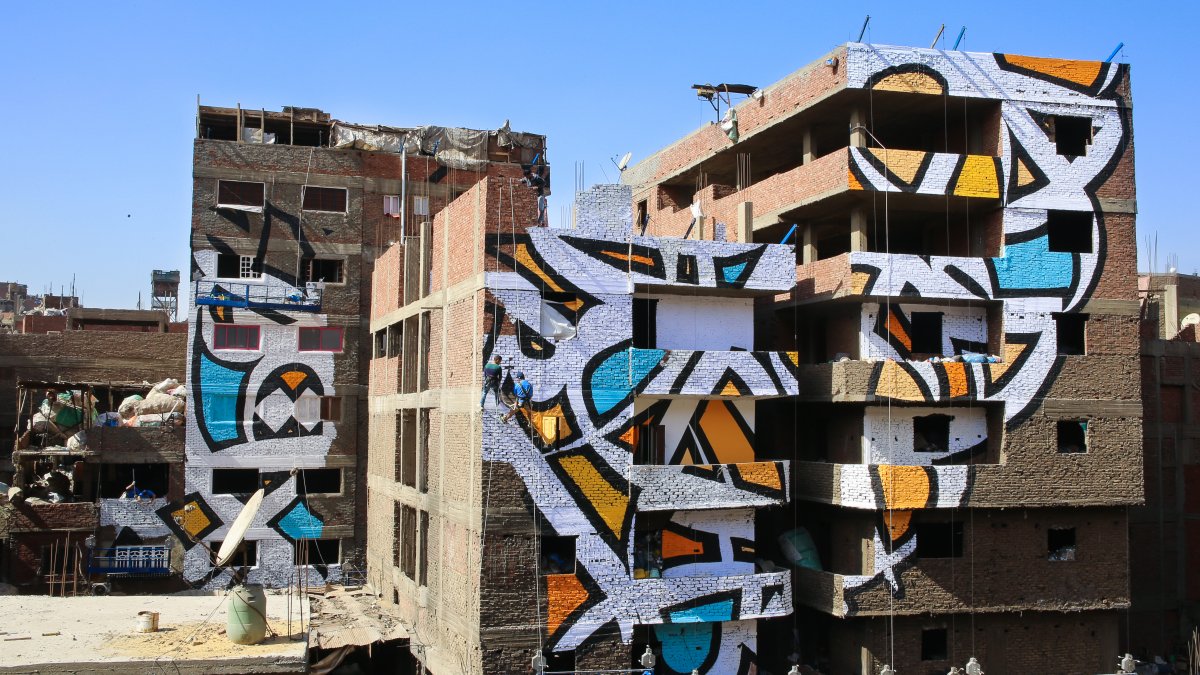 Now fully finished, the piece will stay for as long as the community allows. If a new building obscures the final piece, so be it, eL Seed says. 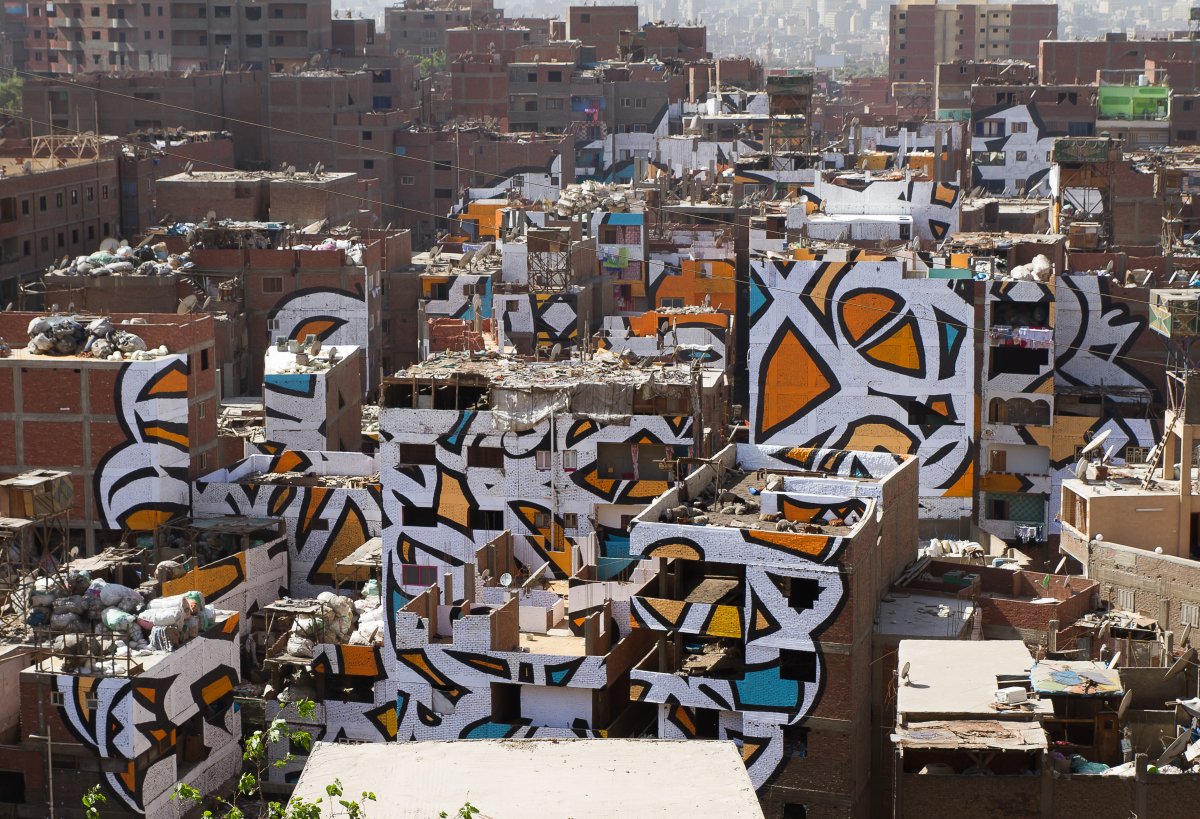 Even though the final view seems to stretch out to the horizon, "for me," eL Seed says, "it's just a piece of art that captures a moment. It's the story behind it that I think is more interesting." 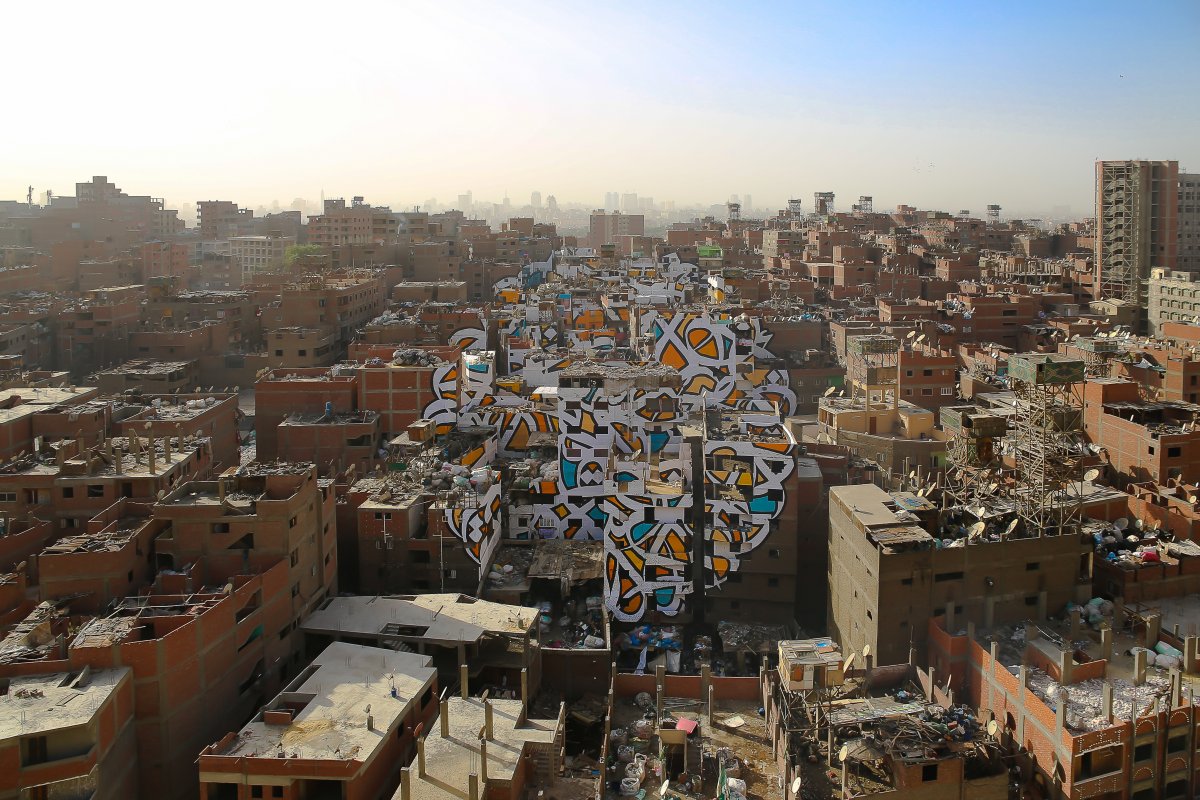 eL Seed is planning to return in a couple months for the release of a book on the project and an accompanying documentary his team is filming. 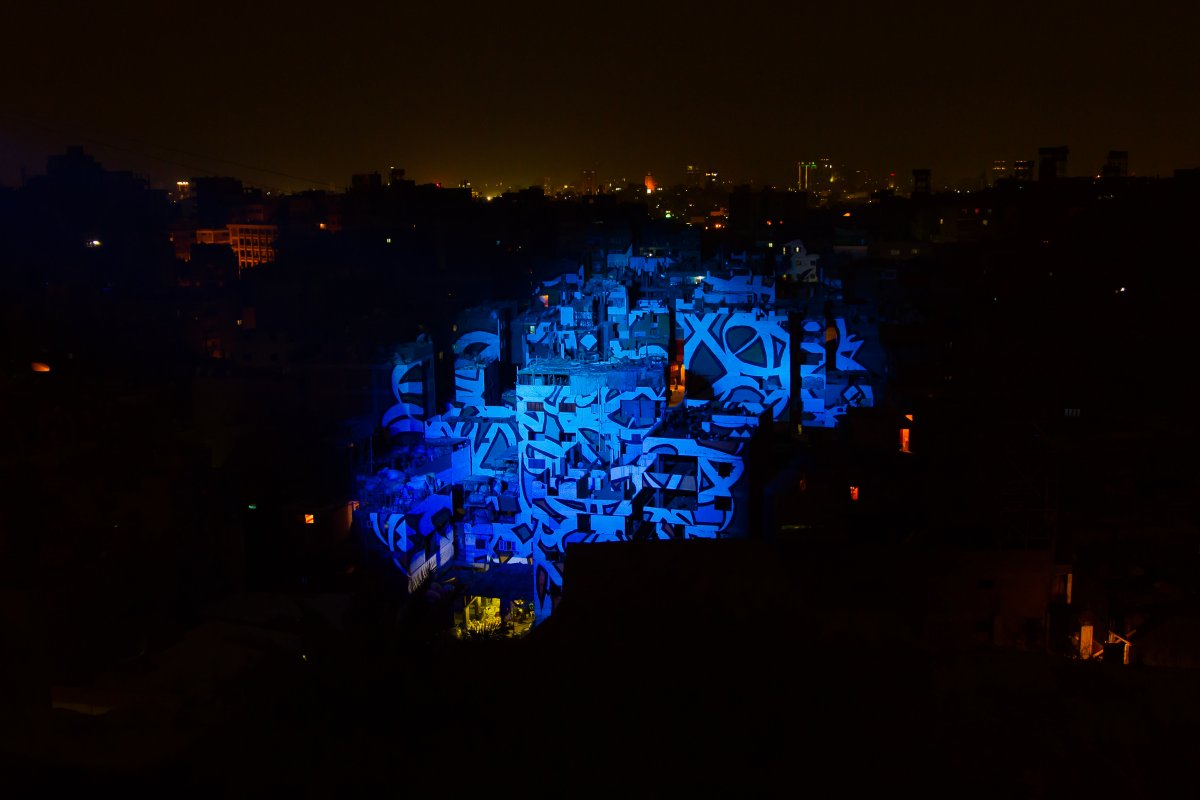 "They changed my perception," he says of the people in the community. "We should still have humility, and this is what brings us together. 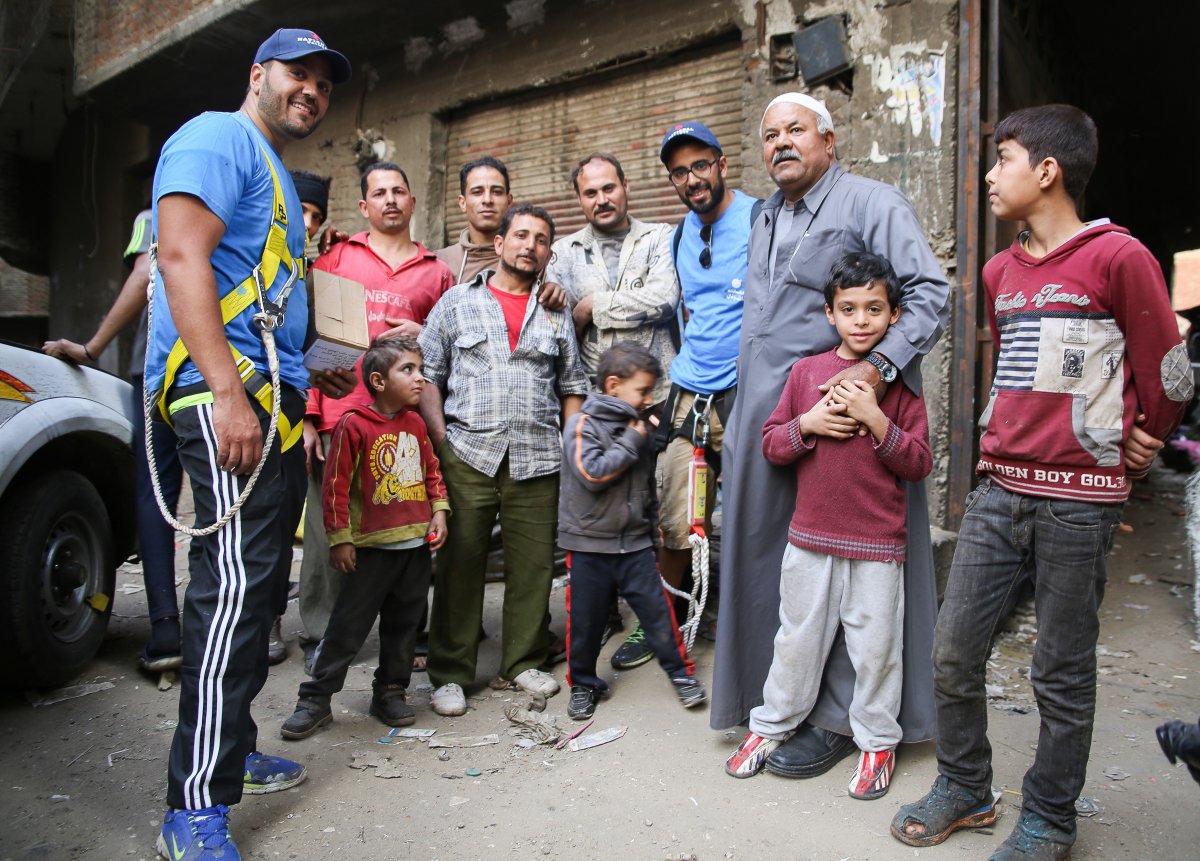 Artist eL Seed, in the glasses and blue shirt, stands with members of his team and the local Cairo community.

What do you think of his "Perception" ?